Meghan’s missed a trick! Less than a THIRD of the 74 labels the Duchess wore on the royal tour were British brands – and US designers were her favourite

With a dizzying 41 outfit changes over the course of 16 days on the royal tour, it’s no wonder the Duchess of Sussex managed to showcase no fewer than 74 designer labels on her journey through four countries.

While royal women are expected to practice ‘diplomatic dressing’ while abroad by showcasing fashion from the host nation, it’s also a chance to fly the flag for British fashion by wearing UK designers.

However, Meghan fell short of championing UK labels during the royal tour, wearing only 20 British designers out of 74 labels – the value of almost £118K.

Designers from the US were LA-born Meghan’s go-to, wearing 25 different American brands – and some on multiple occasions.

Celebrity stylist Lucas Armitage told Femail that Meghan seems to have missed a trick in not taking the opportunity for more obvious promotion of her adopted home.

‘The UK fashion business is in a state of crisis,’ he said. ‘We have seen huge fashion business with the Royal Warrant such as House of Fraser close stores and undergo major financial issues.

It’s no secret Meghan like Kate has a the power to boost any brand by choosing to wear a certain piece or designer so it would have been great to Meghan choose more British brands to showcase on a global scale.’ 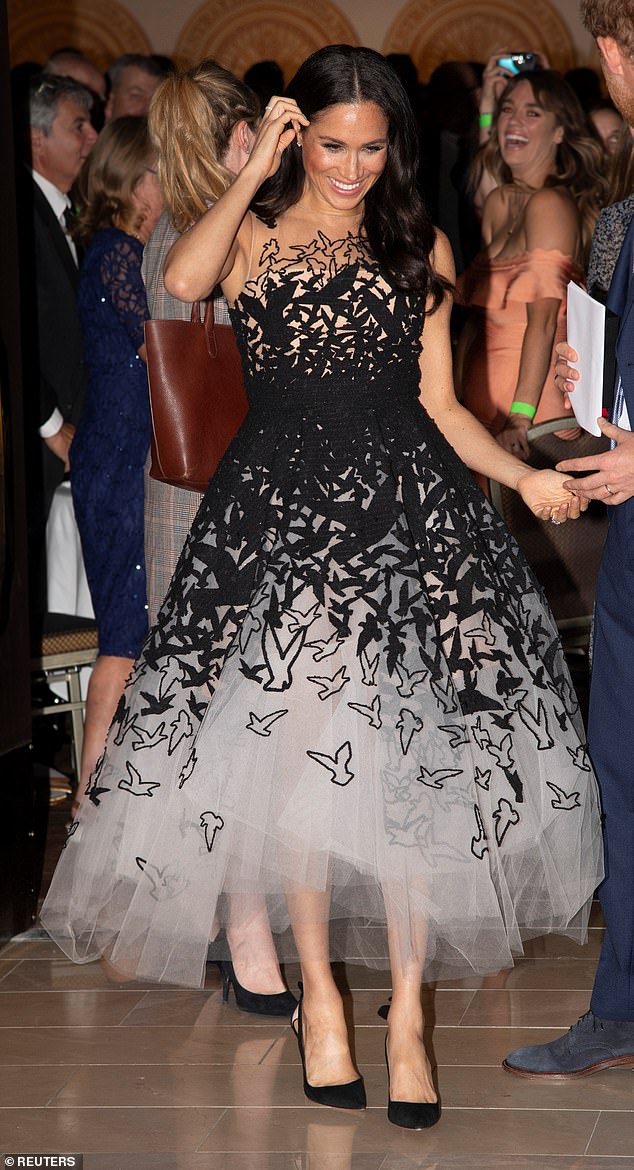 This gown was certainly Meghan’s most breathtaking fashion moment of the tour, but she chose US-based Oscar De La Renta for her most standout look, teamed with pumps by Italian label Aquazzura

The British brands that received a seal of approval from Meghan during the royal tour include Stella McCartney and Antonio Berardi as she wore both designers twice – although two of these dresses were recycled and had been seen before.

When the Duchess did add a UK label to her outfit, it was often in the form of an accessory of pair of shoes, rather than a focal point such as a Burberry coat or Roksanda dress.

Of the 19 British labels she wore, 11 were a coat or dress while the rest were jewellery, footwear or hats.

It’s not the first time that Meghan has missed an opportunity to champion the best of British design. 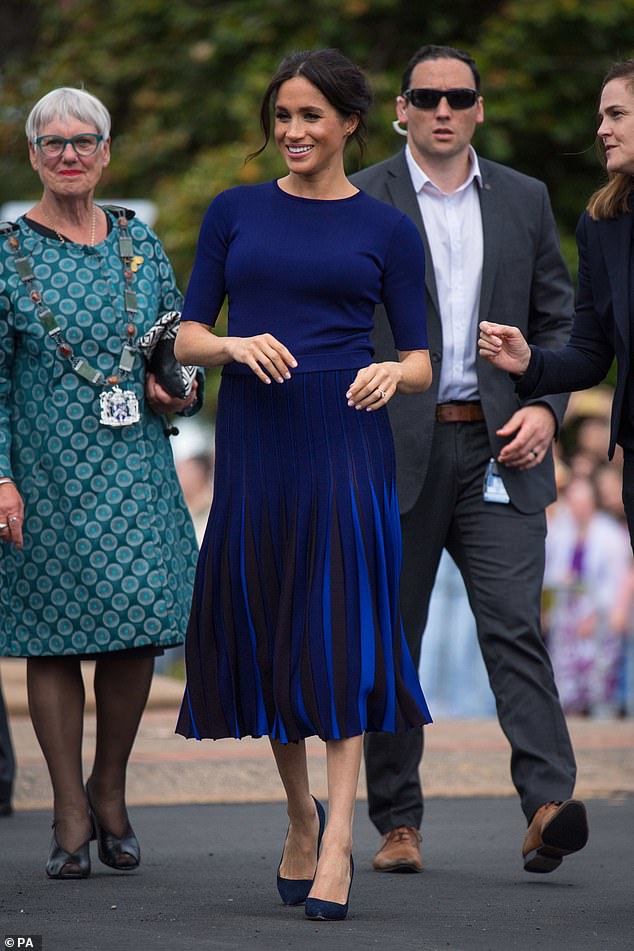 The Duchess took the opportunity to showcase her wedding designer, the French label Givenchy on a walkabout in Rotorua on the final day of the royal tour, teamed with Italian Manolo Blahniks 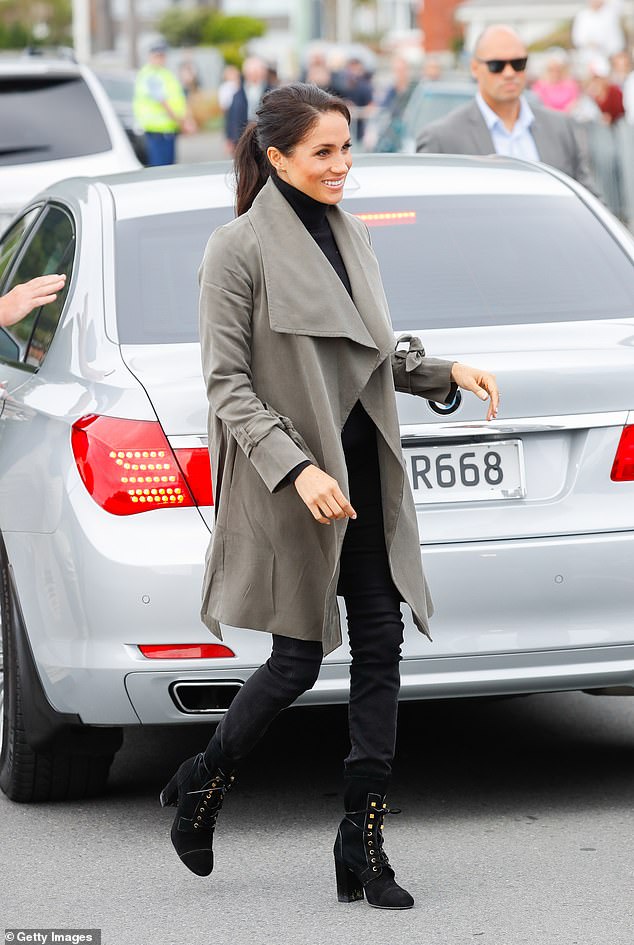 On a visit to Maranui Cafe in Wellington, Meghan wore a trench by Canadian label Club Monaco, a sweater and jeans from Australian labels Jac + Jack and Outland, and boots from US brand Stuart Weitzman 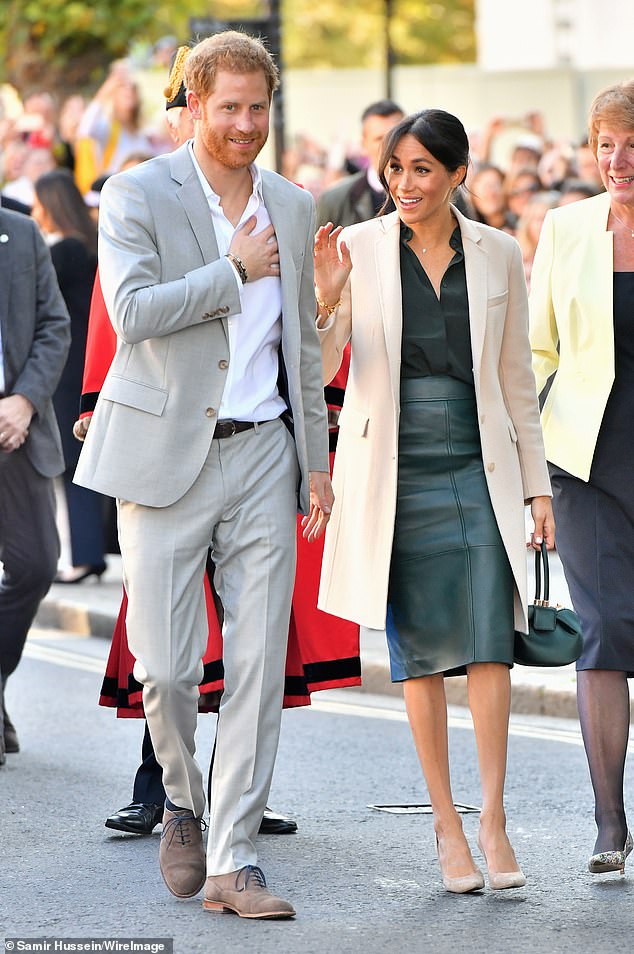 The Duchess of Sussex wore a coat by Italian design house Armani, a skirt by German favourite Hugo Boss and a shirt from Scandi brand & Other Stories for her first official visit to the county that inspired her name

On her first official visit to Sussex, the county that inspired her royal title, she opted for a cream coat from Italian design house Armani, believed to have cost around £2,000, and a £369 leather skirt by German brand Hugo Boss.

She teamed the ensemble with a £69 shirt from & Other Stories, which is part of the Swedish H&M group and carried a £1,685 handbag from trendy New York designer Gabriela Hearst.

Meghan’s preference for North American brands has been evident since her wedding to Harry in May 2018.

The labels Meghan wore on the royal tour

In September it was reported that out of the 22 outfits she had appeared in since she joined the Royal Family, only two were by British labels.

She has also favoured legendary European fashion houses such as Prada, Dior and Givenchy.

It’s believed that the influence of her best friend Jessica Mulroney may be the reason for Meghan’s loyalty to little-known Canadian labels such as House of Nonie and Judith & Charles, which are closely associated with the Canadian stylist.

These brands that were hitherto unknown to the British public are naturally thrilled by the publicity boost.

Barack and Michelle Obama Had the Ultimate Sunday Funday