Meghan Markle showed her support for British fashion labels as she donned a £235 Joseph jumper and a £135 ‘evil eye’ charm necklace from an independent brand while coaching a young interviewee in a video released today.

The Duchess of Sussex, 38, in her role as Smart Works patron, spoke with the British youngster virtually from her home in Los Angeles on 27 March to offer words of advice and encouragement ahead of a job interview.

In a video clip released on the charity’s Instagram page, the Duchess could be seen wearing the plum v-neck knit from British high street stalwart Joseph.

Meanwhile she also opted for Edge of Ember’s Visionary Charm Necklace, which features an evil eye charm and is described online as ‘protecting its wearer from negative vibes’ and also states ‘it’s got your back’. 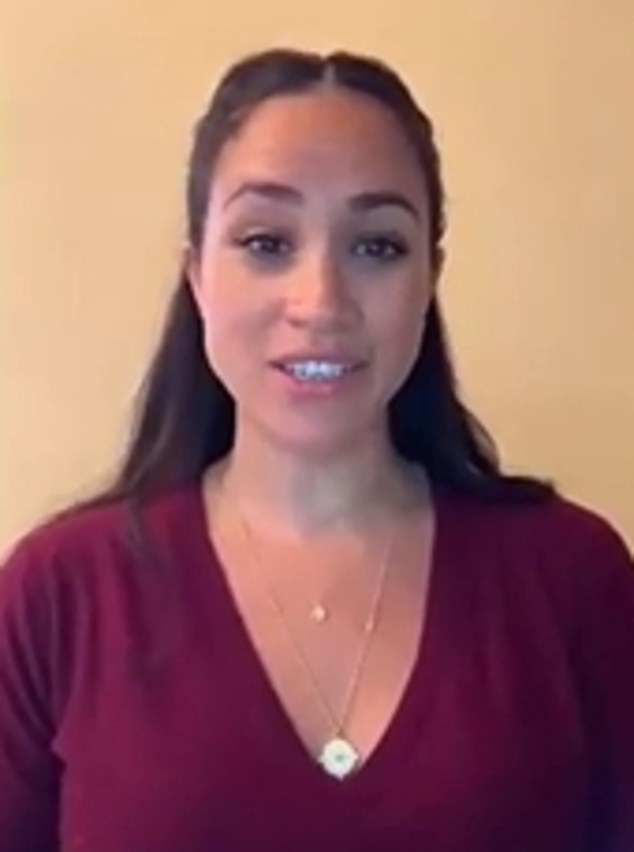 The Duchess of Sussex, 38, donned the £135 ‘evil eye’ charm necklace by British brand Edge of Ember during her video call for her patronage Smart Works

In the newly-released video clip of the phonecall, Meghan donned the cosy burgundy knit while chatting with a British youngster and offering her interview advice.

The Duchess swept her hair back from her face and shoulders to reveal the glittering gold pendant.

Online, the piece is described as a ‘modern-day talisman’ which was ‘inspired by vintage coins found in Asia’ which represent icons of good fortune. 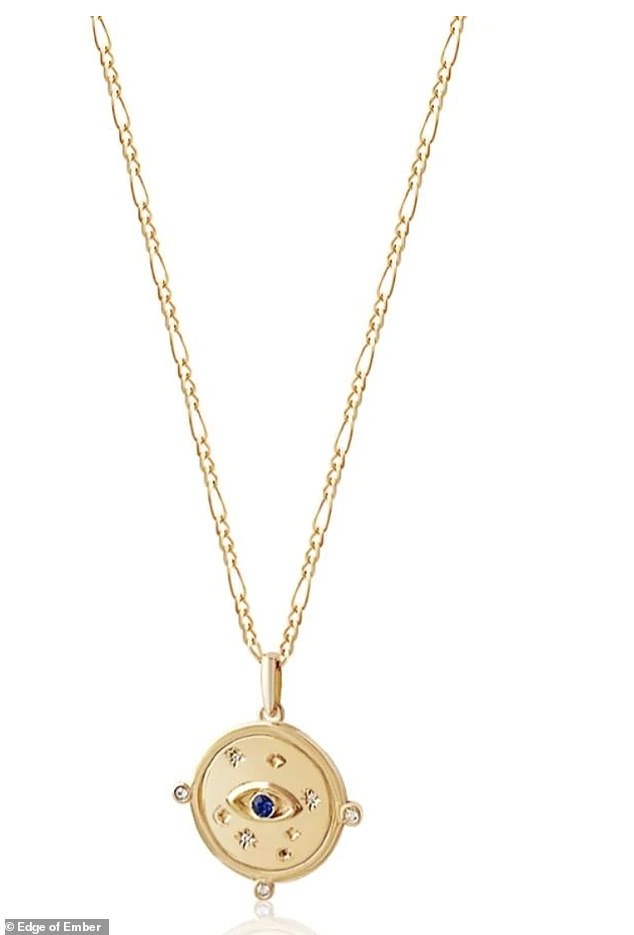 The London-based jewellery brand Edge of Ember prides itself on working ethically with ‘artisan groups and small-scale factories in Asia’ employing skilled craftsmen.

The royal has opted for the brand on several occasions, most recently while visiting a school in Dagenham during her Farewell Tour in London. 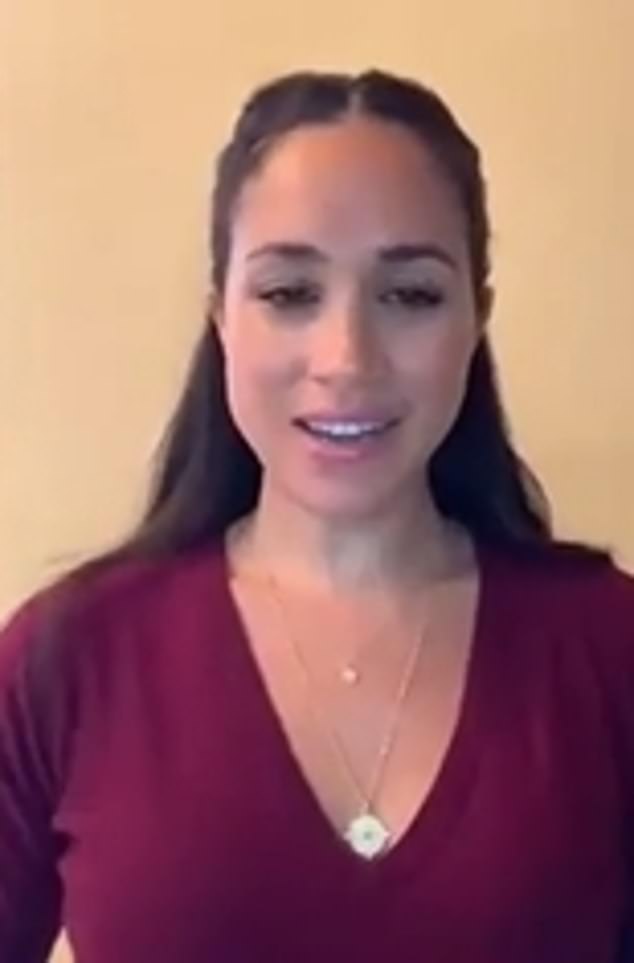 The Duchess of Sussex opted for two British brands during the call with the youngster, rewearing a Jigsaw jumper

Meghan previously sported an evil eye necklace while the royal couple were on tour in South Africa.

The Duchess wore the £450 18-carat gold evil eye chain as she gave a speech at the Nyanga township in Cape Town in September.

Its creator, the Turkish-inspired jewellery designer Alemdara, explains on its website: ‘As per Ottoman legend, an evil eye on your person wards off jealousy from others.’

It adds that the symbol helps ‘dispel negative thoughts and energy’.

In the video, the duchess layered the 18ct-gold necklace over a berry shade cashmere deep-V-neck pullover from British brand Joseph costing £235. 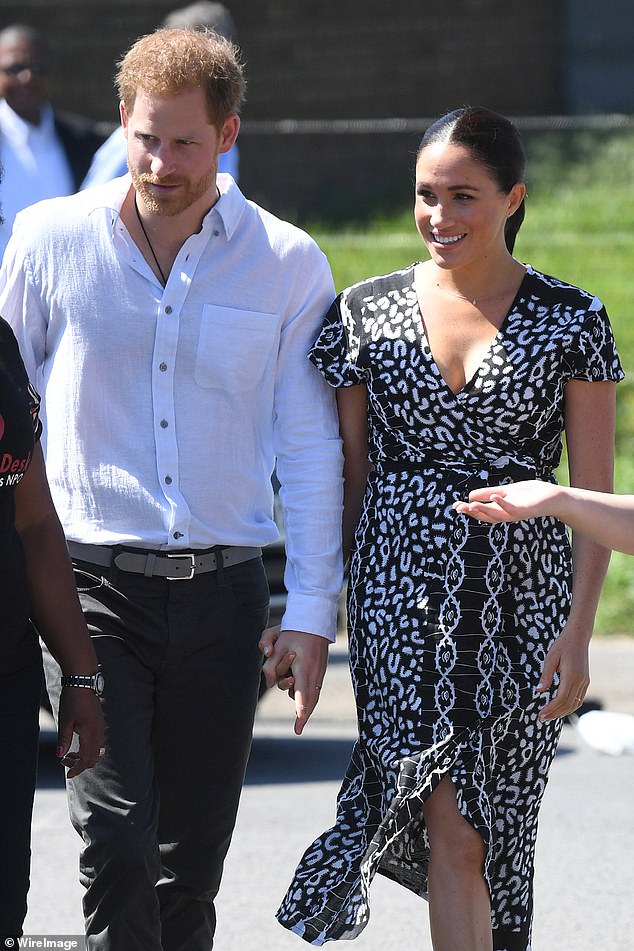 It’s not the first time the Duchess has worn a necklace bearing the evil eye symbol. She selected a pendant with a similar pendant during her visit to South Africa last October

It is not the first time Meghan has worn the knit after she paired it with a red Boss leather pencil skirt at The Queen’s Commonwealth Trust and One Young World event in October alongside Prince Harry.

The Duchess spoke with the British youngster virtually from her home in Los Angeles on 27 March to offer words of advice and encouragement ahead of a job interview.

In a video clip released on the charity’s Instagram page, Meghan can be seen chatting virtually to an unnamed woman who was applying for an internship after completing her studies in psychology

She praised the youngster for her positive attitude, saying ‘there’s so much going on in the world right now’ but she was being a ‘beacon of hope and all the positivity.’ 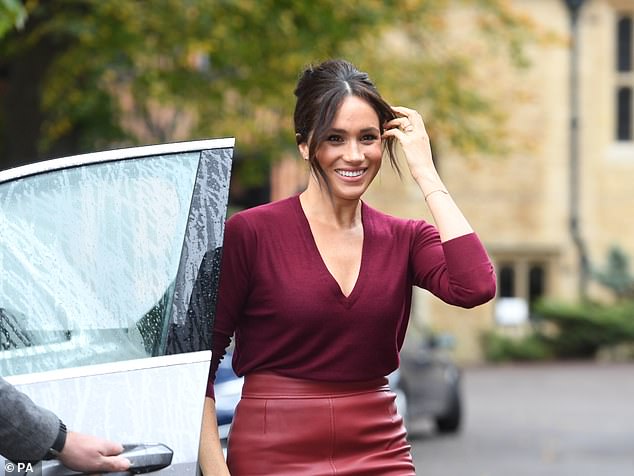 Hundreds of shoppers line up outside supermarkets before doors open

Mountain biker fined over $1K for ride amid coronavirus restrictions