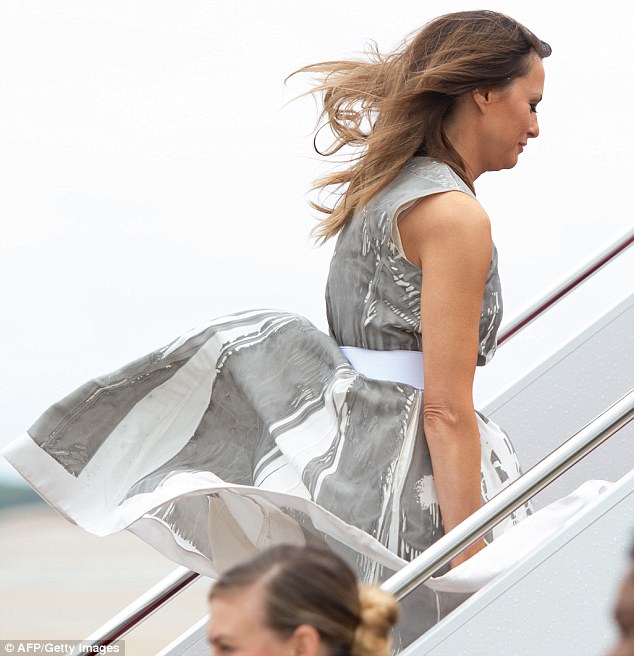 Weather: Melania Trump was caught in a strong gust of wind as she traveled to Nashville, Tennessee, in a midi dress on her first trip to promote her ‘Be Best’ campaign 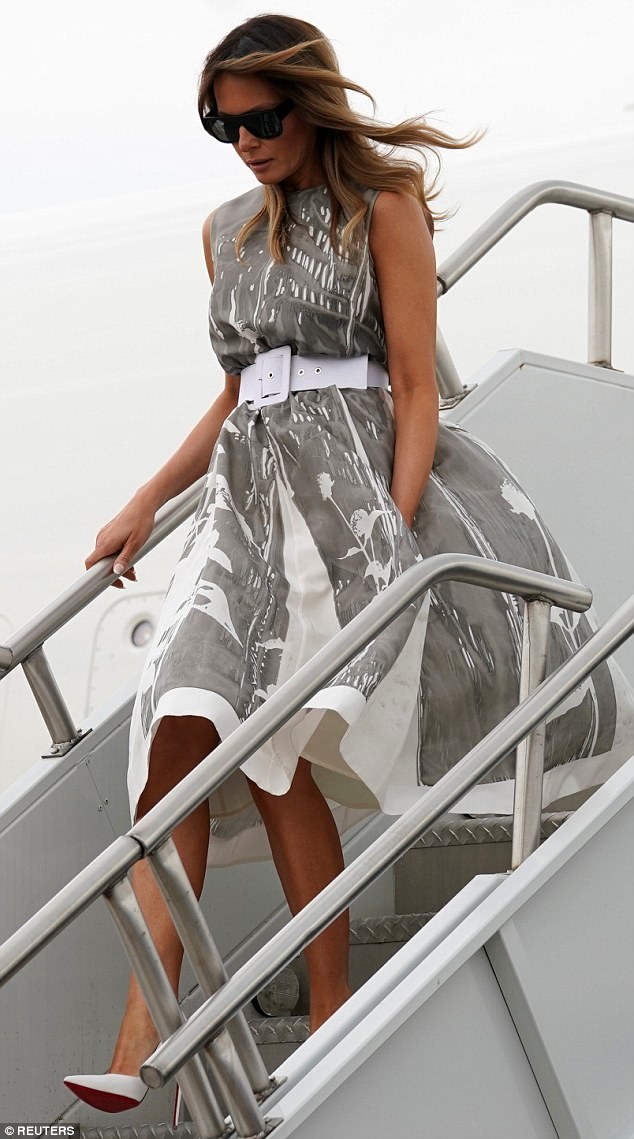 Red bottoms: The first lady, 48, touched down at Nashville International Airport around 2 pm, revealing a pair of white Louboutin pumps as she stepped off the aircraft 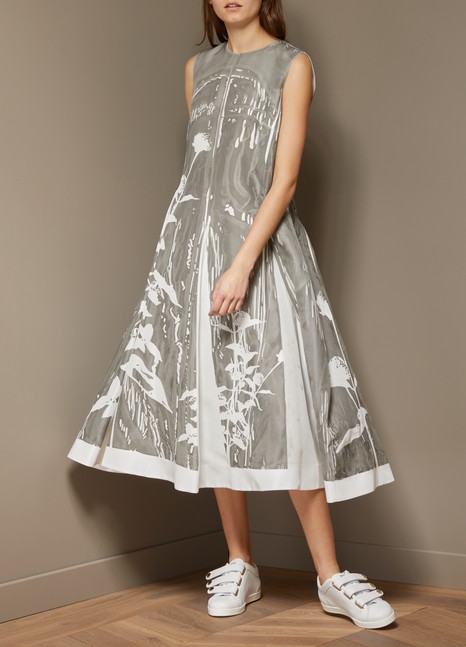 Sold out! shop the brand

Melania Trump is winning over the masses with her winning First Lady fashion choices. Some ardent fans call her the Jackie-O to be and we at Fashion Finder appreciate her conservative yet punchy looks.

Take her dress she wore to Tennessee. Pulled from the Spring 2017 collection from Jil Sander, she first wore this dress back in July 2017 in Germany. She then added a bold white belt to tie the look together.

As this is from last spring season, it is now sold out, but follow the link to the right to shop the current range at NET-A-PORTER.

We also have an edit of dresses inspired by this Jil Sander number that won't break the bank, shop below! 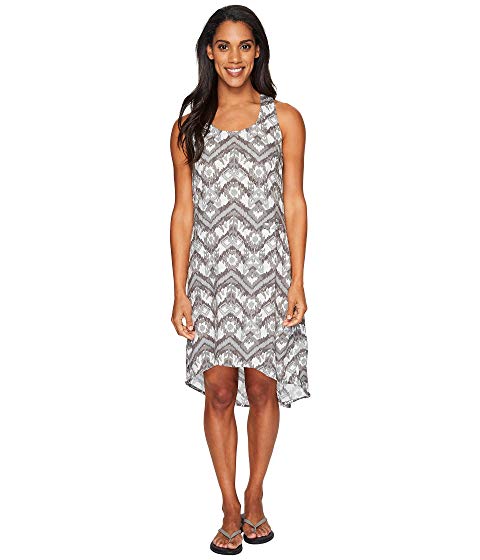 Accessories: Melania paired her sleeveless, gray and white dress with a large white belt, giving the outfit more structure by cinching the garment at the waist

Melania paired her sleeveless, gray and white dress with a large white belt, giving the outfit more structure by cinching the garment at the waist.

She touched down at Nashville International Airport around 2 pm, revealing a pair of white Louboutin pumps as she stepped off the aircraft.

Her towering heels featured the signature red soles that make the French label easy to spot even from afar.

The first lady, who wore her hair down in a blowout, finished off her outfit with a pair of large black sunglasses.

She is certainly not the first public figure to be surprised by a brutal gust of wind while wearing a dress during an official visit. Final touches: The first lady, who wore her hair down in a blowout, finished off her outfit with a pair of large black sunglasses Campaign: Melania visited a children’s hospital on Tuesday in her first domestic trip to highlight the initiative, which she launched in May at the White House 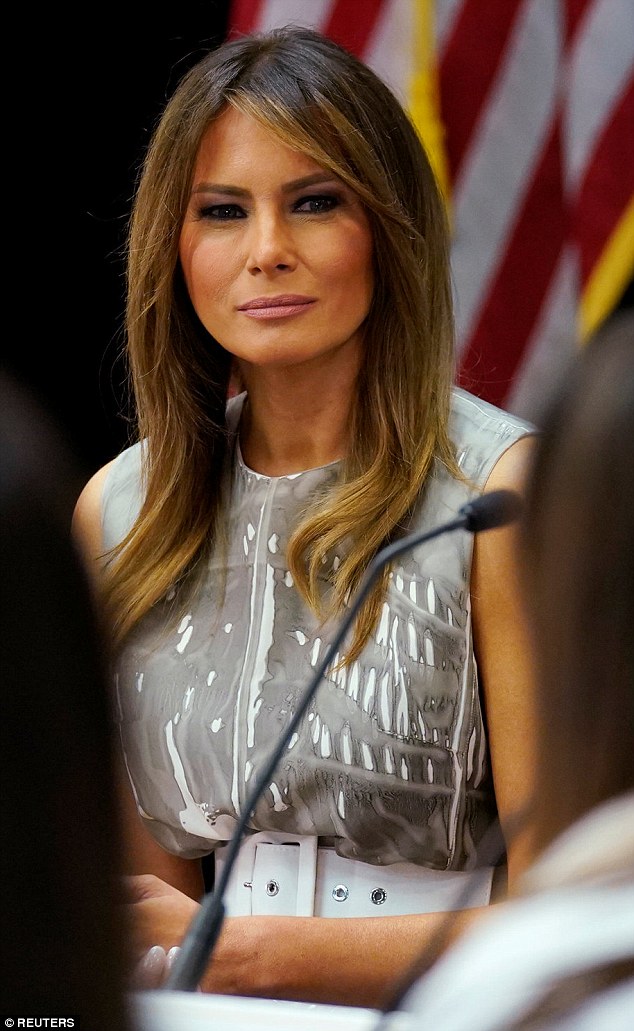 Syndrome: Melania sat in on a discussion about neonatal abstinence syndrome, which occurs when a baby withdraws from drugs that he or she was exposed to in the womb 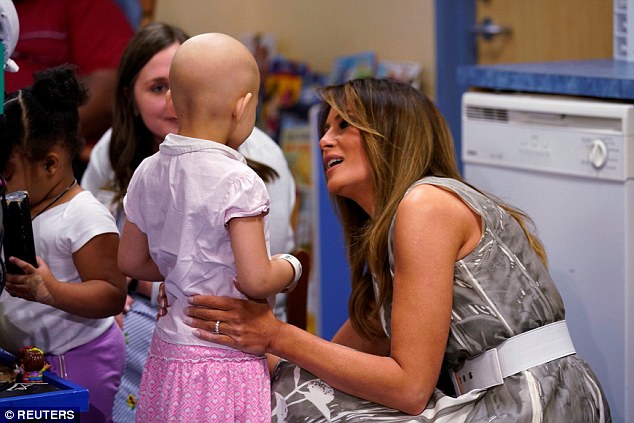 Meeting: The first lady greeted children during her visit at the hospital 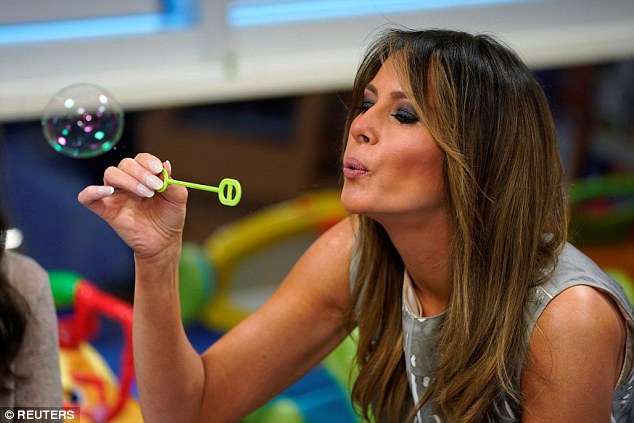 Activities: She was pictured blowing bubbles as she met with the young patients 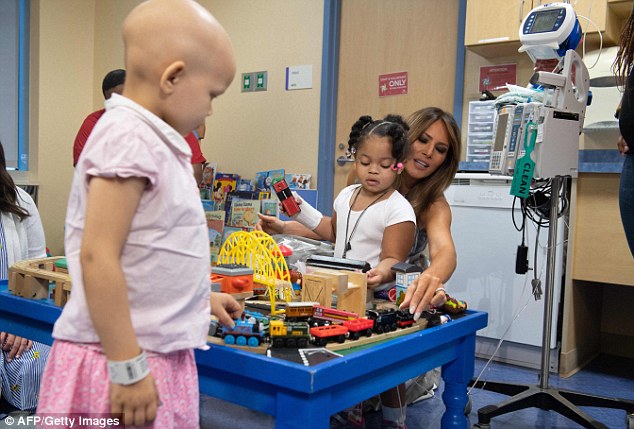 Back in 2011, Kate Middleton suffered a similar mishap when she and Prince William landed in Calgary, Canada.

Strong winds sent her pleated yellow dress flying, prompting the duchess to try to hold it down as she and her husband were photographed on the tarmac.

A similar incident occurred when she and William landed in Wellington, New Zealand, in 2014.

Kate, who stepped off the plane while carrying a baby Prince George, had to hold down her red outfit to avoid a wardrobe malfunction.

In recent weeks, Melania has worn pants and tight pencil skirts while flying to various locations, eliminating the possibility of a mishap.

However, there is another technique to fend off possible incidents.

Queen Elizabeth II is known to have lead curtain weights sewn into the helm of her outfits so that even strong gusts of winds can’t send her garments flying. 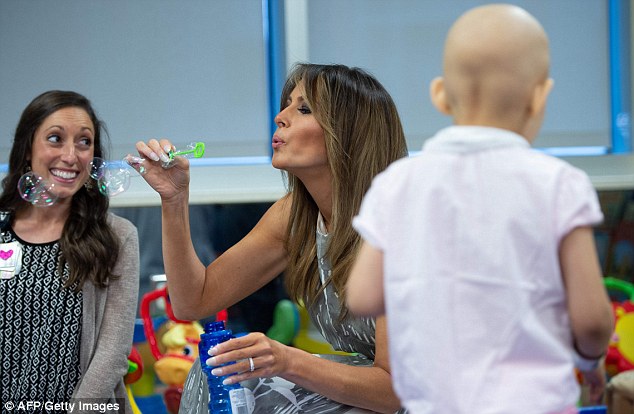 Visit: A member of staff smiled as Melania blew bubbles for the young patients Talking: The first lady shared a conversation with four-year-old Essence at the hospital 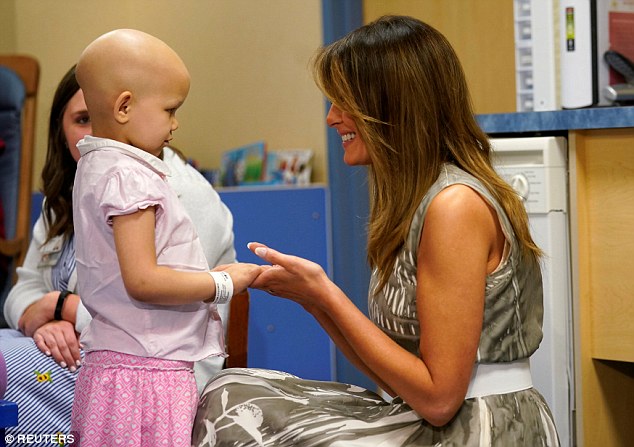 Interacting: Melania smiled as the little girl placed her hands in hers during the visit 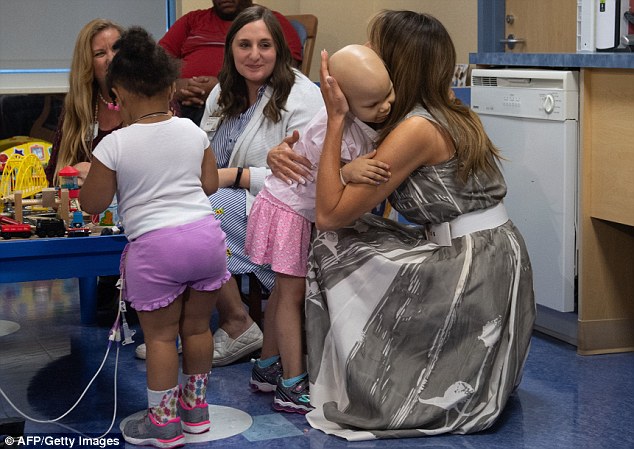 Embrace: Essence leaned in to give the first lady a hug while Natalayah played nearby

On Tuesday, Melania visited Monroe Carell Jr. Children’s Hospital at Vanderbilt in Nashville in order to highlight her ‘Be Best’ initiative, which focuses on children’s well-being, social media use, and opioid abuse.

She was scheduled to participate in a discussion about babies who are born dependent on drugs and visit patients.

Melania was originally supposed to also tour the neonatal intensive care unit, but according to her press secretary and communications director Stephanie Grisham, was instead set to privately meet with families whose infants in the unit have been diagnosed with neonatal abstinence syndrome.

The first lady had purchased about nine pink, blue, and white fleece blankets with the White House seal on them to give to families.

So far, Melania has done little personally to publicize the campaign around the country since she unveiled it at the White House in May.

A week after the announcement, the first lady was hospitalized for kidney surgery, stayed five nights, then remained several weeks out of the spotlight recuperating before resuming a public schedule.

She has since made two trips to the U.S.-Mexico border to meet with adults and children affected by the president’s policy of separating migrant families who cross into the U.S. illegally. 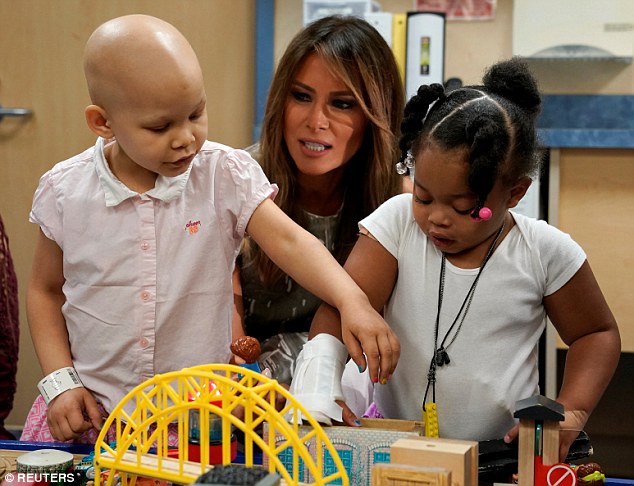 Concentration: The two little girls seemed focused as they showed Melania the toys 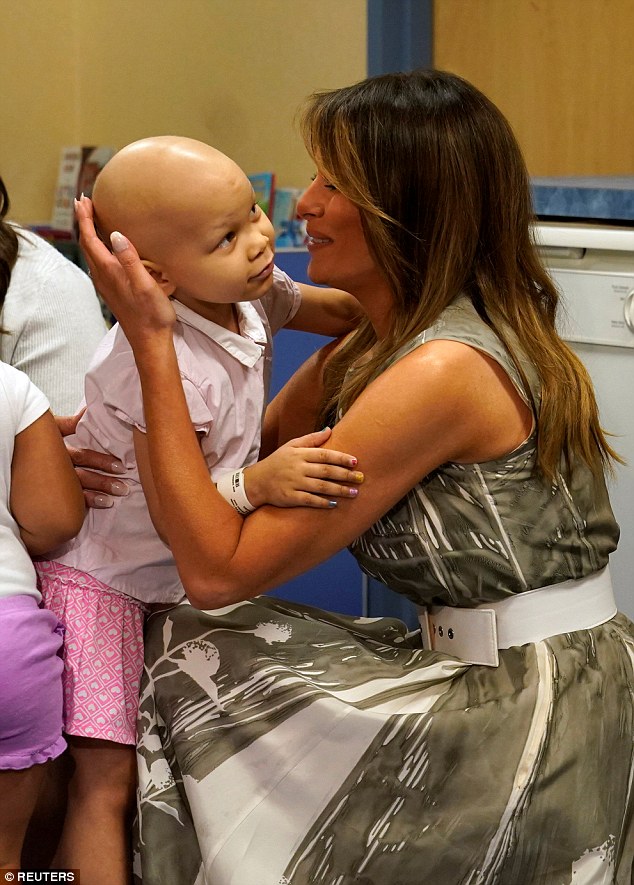 Confident: Essence didn’t look intimidated as she went to give the first lady a hug 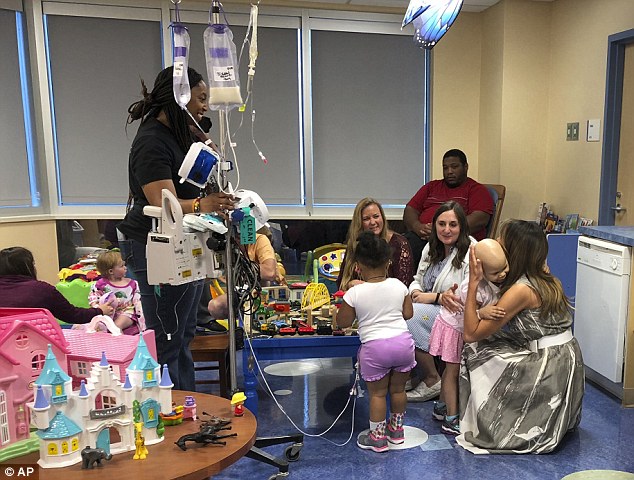 Group: Several young patients and members of staff were gathered in the playroom 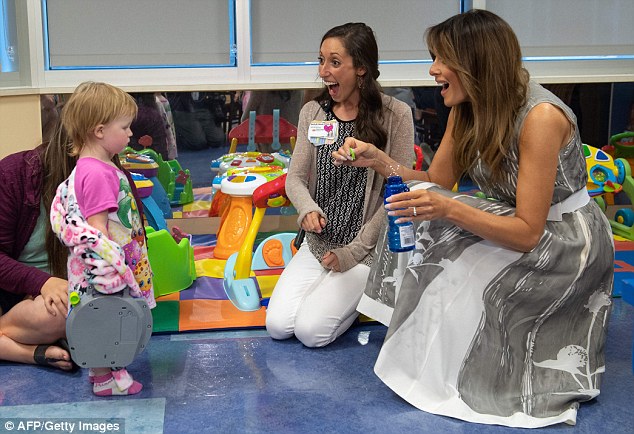 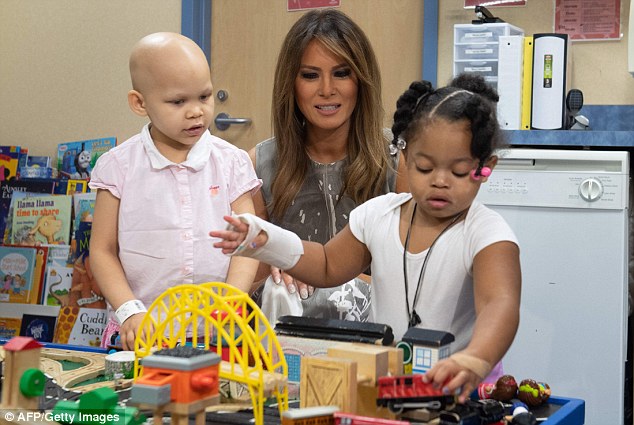 Watching: The first lady looked on as Essence and Natalayah played with some of the toys Schedule: Melania’s visit with the young patients came after a roundtable discussion 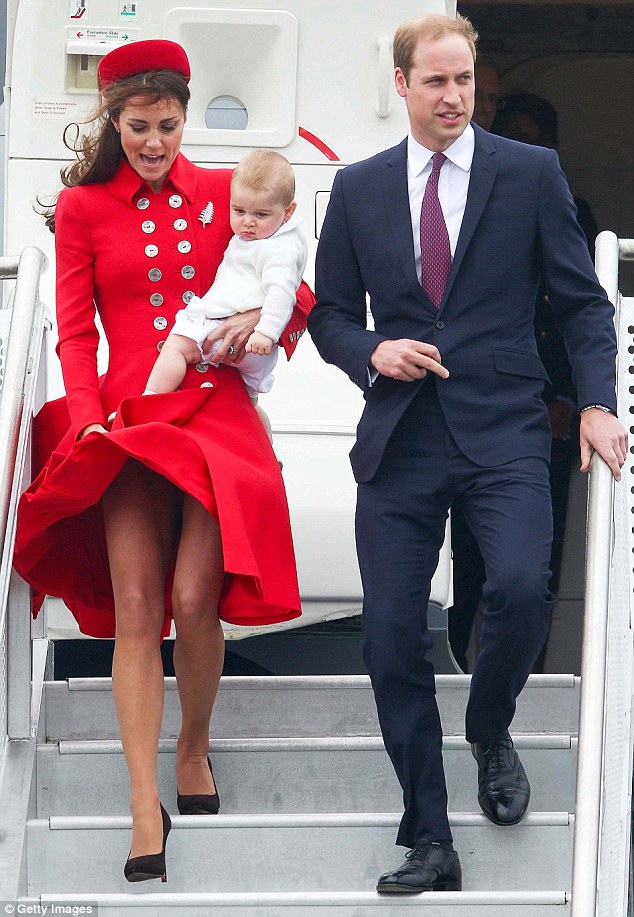 Oops: Kate Middleton suffered a similar mishap when she and William landed in Wellington, New Zealand, in 2014. The duchess, holding a baby Prince George, also held down her outfit

The first lady did promote ‘Be Best’ when she accompanied the president to London this month. She has also discussed it during surprise visits in the Washington area, including an unannounced trip to Microsoft’s Innovation and Policy Center last week.

Melania visited with a group of students who help the computer software maker with its work on youth-centered online safety. Being good citizens online is one focus of the first lady’s campaign, though her husband is routinely criticized for using Twitter against his foes.

‘To see students taking action and being positive leaders in the digital world for youth is exactly what “Be Best” is focused on,’ the first lady said after visiting Microsoft.

The issue taking her to Tennessee is neonatal abstinence syndrome, which occurs when a baby withdraws from drugs — usually an opioid painkiller — that he or she was exposed to in the womb.

Withdrawal causes such symptoms as irritability, muscle tremors, difficulty feeding and sleeping, and breathing problems, according to testimony that Dr. Stephen Patrick, a pediatrician and neonatologist at the children’s hospital that the first lady visited, gave earlier this year to a Tennessee state legislative committee.

Opioids are fueling the deadliest drug overdose epidemic in U.S. history. About 70,000 Americans died of a drug overdose last year, according to preliminary numbers released this month by the federal Centers for Disease Control and Prevention. That’s a 10 per cent increase from the previous year.

Republicans will control state Senate for rest of 2018 session

Australia earthquake – Burra rocked by 4.3 magnitude tremors as locals say ‘it was like a truck hit the house’ – The Sun

Can you tell the difference between this £52 ASOS jacket and a £2,115 designer version?