Bestselling author Michael Lewis is turning his critical eye toward the federal government, examining the transition from the Obama administration to the Trump administration. In his new book, “The Fifth Risk,” he focuses on three Cabinet departments: Agriculture, Energy and Commerce. Lewis said the day after the election, many of the planned briefings never happened. “The Trump administration didn’t show up at all,” Lewis said Monday on “CBS This Morning.” 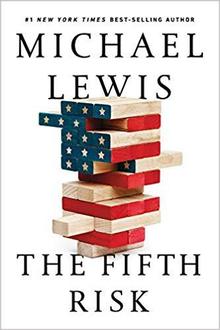 “There were parking spots set aside and little finger sandwiches that went stale. It was unbelievably sad,” Lewis said. “The people who were there were kind of wounded about all this. What I do is go get the briefings. So I’m the first person – when I go knock on people’s doors and say I wouldn’t know how the weather service works, people will say to me, ‘I’m so glad you called because… I’ve never had a chance to give my briefing yet.'”

Lewis also said the “only requirement” for people who took over the positions during the transition was their loyalty to Mr. Trump – “and he cared about nothing else.” Lewis gave an example from staffing changes in the Department of Agriculture.

“There is a $3 billion a year program to invest in basic science. And the science is preparing us for – essentially preparing us to have a food supply after climate change. It enables us to adapt the food supply to climate change. And the person running that was a woman named Kathy Woteki, and she was an exquisitely trained scientist who had been in… jobs like that for a couple decades,” Lewis said. “She had done original research that was breathtakingly interesting. She is replaced by a right wing talk show radio host from Iowa who has no science background at all. And he’s supposed to administer this $3 billion budget and decide who’s going to get the money to do what research? This sort of stuff happens over and over and over.”

He also gave the example of Secretary of Energy Rick Perry, former governor of Texas.

“This is in the end, this is what kind of triggers me, is when Rick Perry is nominated to be the secretary of energy, he had said he wanted to eliminate the department as a presidential candidate and they couldn’t remember its name. Now, you make a couple calls and you realize this department holds all the nuclear weapons, and those nuclear weapons are assembled in the panhandle of Texas where he was governor, and he didn’t know they did that? … That ends up being typical. The idea that you don’t need to know anything to run this enterprise is at the bottom of the Trump administration,” Lewis said.

CBS News reached out to the White House and the Agriculture, Energy and Commerce Departments for comment. We only heard back from the National Oceanic and Atmospheric Administration (NOAA), which falls under the Commerce Department. NOAA said it doesn’t comment on appointments.