Australia may be able to outstrip the goal of reaching net zero greenhouse gas emissions by 2050, Prime Minister Scott Morrison says, but he said any commitment would wait until the United Nations climate talks at Glasgow in November. 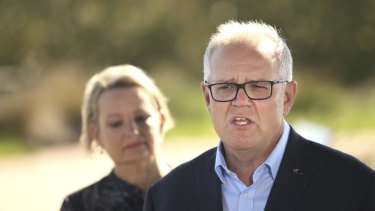 Prime Minister Scott Morrison says Australia may be able to beat a target of net zero by 2050, depending on technology development. Credit:James Alcock.

Mr Morrison addressed 40 world leaders at UN President Joe Biden’s virtual climate summit on Thursday night and said Australia would focus on developing low emissions technology. But the potential for it to reduce emissions would determine not just how ambitious Australia’s net zero deadline would be, but if there was a deadline at all, he said.

“I indicated last night that we were reviewing those (net zero deadlines) all the time. We’re going through that process and when we have more to say about that, we will,” he said.

“When we’re in a position to do that, that’s (Glasgow) where we will make them.”

However, Mr Morrison used his speech on Thursday to argue that Australia would only set a more ambitious target if it could guarantee the economic outcome.

“For Australia, it is not a question of if or even by when for net zero, but importantly how,” he said.

“Our goal is to get there as soon as we possibly can, through technology that enables and transforms our industries, not taxes that eliminate them and the jobs and livelihoods they support and create, especially in our regions.”

Our major trading partners have committed to net zero 2050 deadlines and have set ambitious 2030 goals. Australia is committed to reducing emissions by 26 to 28 per cent by 2030 and has not set a deadline to reach net zero.

The federal government announced on Thursday night a $100 million plan to boost the health of Australia’s marine environments, including investing $30 million in blue carbon projects that would tap marine vegetation to drive down Australia’s greenhouse gas emissions.

Next Galaxy S20 update from Samsung could fix these worrying issues