Home » Lifestyle » Morrison goes back to the future with interest rate, trust tactics

There was a tinge of desperation in the way Scott Morrison opened a dusty political cupboard on Monday to grab some old slogans for the coming federal election.

The Prime Minister ramped up a fear campaign about Labor leader Anthony Albanese by claiming his opponent would push up interest rates, petrol prices and electricity bills. 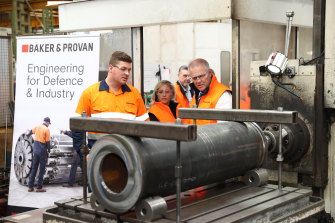 With months to go until polling day, Scott Morrison (right) is not even waiting for Labor to reveal its policies to launch his scare.Credit:Domininc Lorrimer

So an election that should be about the future is going to be fought with the slogans of the past.

Voters have heard it all before. John Howard spent the 2004 campaign promising lower interest rates under a Coalition government, a promise that was impossible to test because it was based on so many hypotheticals.

It was a transparent move but it worked. The Labor leader in that campaign, Mark Latham, felt the need to sign a giant pledge to keep interest rates down, dragging him into arguments about the economic issues Howard wanted voters to think about.

Morrison is being just as obvious. He is even copying Howard’s opening line from the 2004 campaign: Who do you trust? Morrison used it in one of the leaders’ debates in the 2019 election and brought it back last month.

Like Howard, who posed the question to voters to shift the subject from his personal honesty to his reliability on the economy and national security, Morrison can use the line after French President Emmanuel Macron branded him a liar two weeks ago.

The Coalition has no substance to its claims about petrol prices and electricity bills. Labor canvassed the idea of consulting on fuel emission standards at the last election, but the government has consulted on the same subject for years. With a scare campaign ahead, Albanese might want to drop that policy.

The prospect of a scare campaign will also make Albanese and his colleagues think carefully about their looming decision on a 2030 target to cut greenhouse gas emissions. It is naive to think they can tough out any scare. They have to calculate the risk and reward of greater ambition.

On interest rates, however, there is no Labor policy in question. There is only a simple claim from Morrison based on voter perceptions that the Coalition is better at economic management. The government had a lead of 45 to 23 per cent over Labor on this issue in the last Resolve Political Monitor.

Morrison did not have an easy answer when he was put on the spot on interest rates on Melbourne radio station 3AW last Friday. Radio host Neil Mitchell noted that inflation in the United States had reached its highest level in 31 years and asked: “We have to see increased interest rates in this country, do we not?”

Morrison played down the concern. “What’s going on in the United States is different to what’s going on here,” he said. “So I don’t think it is a direct knock-on or a direct follow-on here.”

Now his message is different. He is promising lower rates under the Coalition. “You’re going to see interest rates go up more than they would need to, otherwise. And that’s why economic management is so important now,” he says.

There is one curiosity about this tactic. Why fire all the ammunition now? With months to go until polling day, Morrison is not even waiting for Labor to reveal its policies to launch his scare. He is blatantly campaigning. This suggests some anxiety about how he is travelling.

He is also changing the subject from the big issues of the pandemic: the state of the hospitals, the vaccine rollout and the arguments about whether he made the right decisions over the past 18 months.

Why? Morrison is the first prime minister since Howard to have to fight an election on his full-term record. Every leader since Howard’s last campaign, 2007, has had his or her time cut short. No wonder Morrison finds so much rich material in Howard’s old slogans.

Samsung’s Galaxy Fold is very exciting, if not perfectly smooth

Mum creates amazing Marvel tree featuring the Incredible Hulk, Superman and more – and boys and girls will love it