An outspoken mother compares her daughter’s stylish wedding jumpsuit to John Travolta’s flares in Say Yes To The Dress Lancashire – before adding the lace gives her a ‘poochie belly.’

In tonight’s episode of the TLC show, fashion-lover Kirsty wants to ditch the traditional white dress in favour of trousers on her wedding day, hoping to impress her social media followers as much as her fiancé Joe.

However, her opinionated mum Helen is left less than impressed when she sees the unconventional outfit for the first time.

‘She looked really, really classic and I thought “I like that,” until my eyes went down and I saw those trousers,’ she says. ‘I’m not keen on those trousers: they’re flary, they remind me of the 1970s, John Travolta.’

Helen continues. ‘Because there’s so much lace on her belly it gives her a bit of a poochie belly’ – and Kirsty begins to agree. 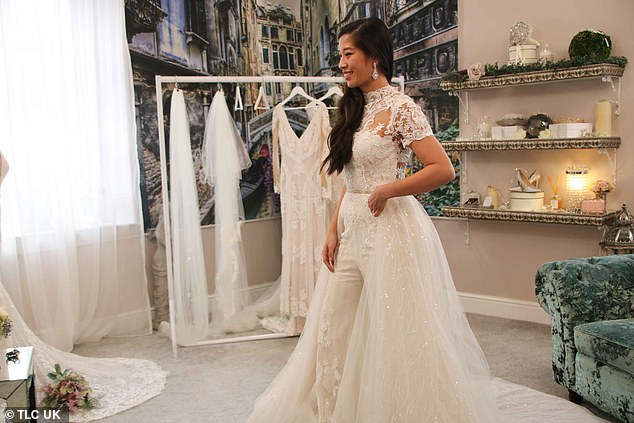 Kirsty, from Lancashire, wants to ditch traditional white dress to wear trousers on her wedding day in tonight’s episode of TLC’s Say Yes To The Dress Lancashire 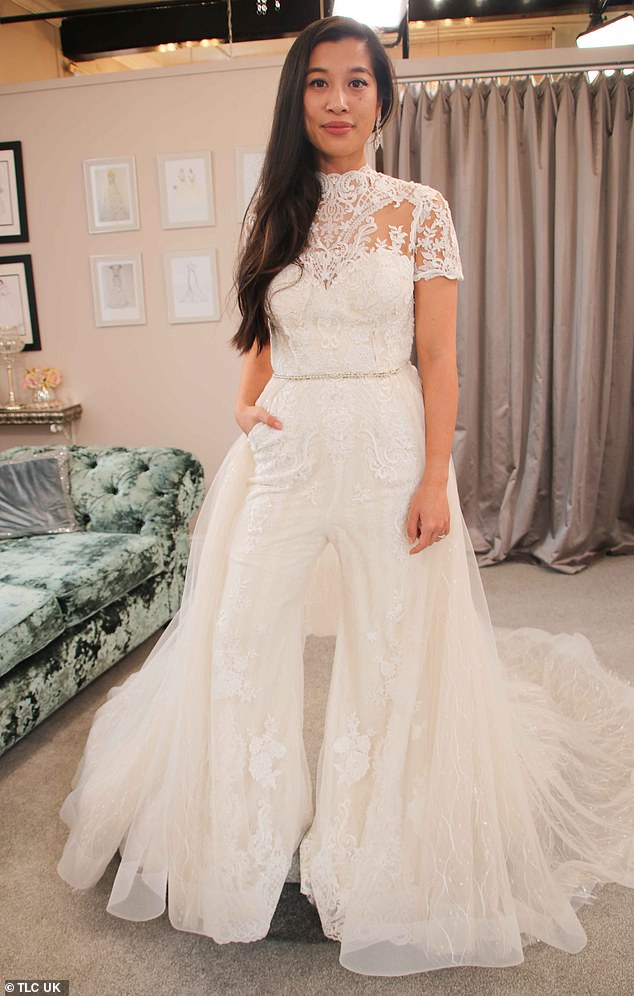 Gok tries to bring Kirsty’s vision to life by picking out a stunning, lacy wedding jumpsuit with flared trousers for her to try on (pictured)

As the episode begins, Kirsty explains boldly: ‘I’ve got a very, very strong vision: I want to wear trousers.’

However, mum Helen wants the complete opposite and to see her daughter walking down the aisle looking like a princess.

‘I like the ballgowns, because I’ve seen her in ballgowns,’ she says. ‘I want to see her in a princess dress, but when she told me that she wanted to wear trousers it just threw me off guard.’

With a budget of £3,500 to spend, Gok Wan is confident he can find something suitably stylish and dazzling for the bride-to-be to wear on her big day, while keeping Helen happy as well. 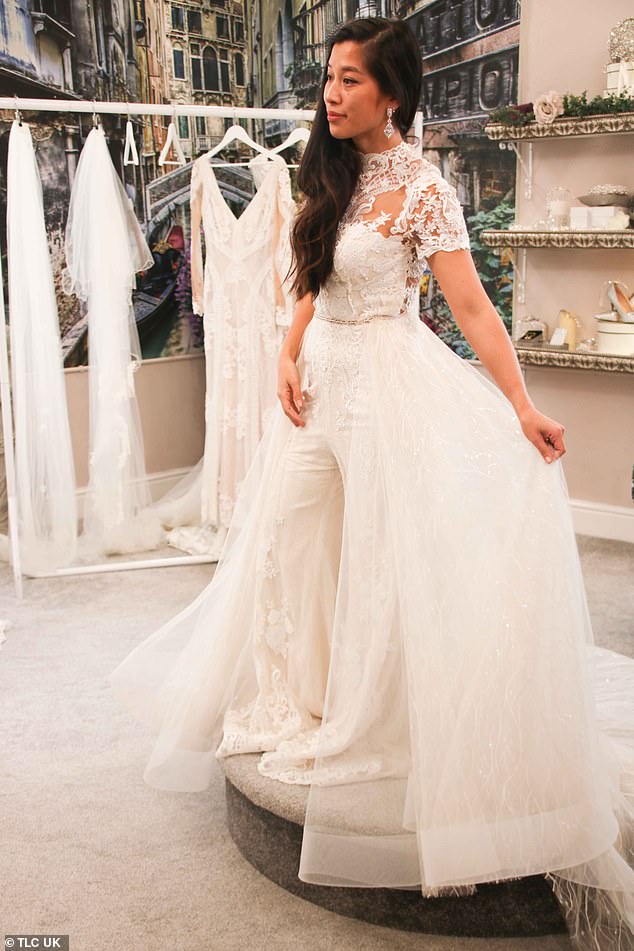 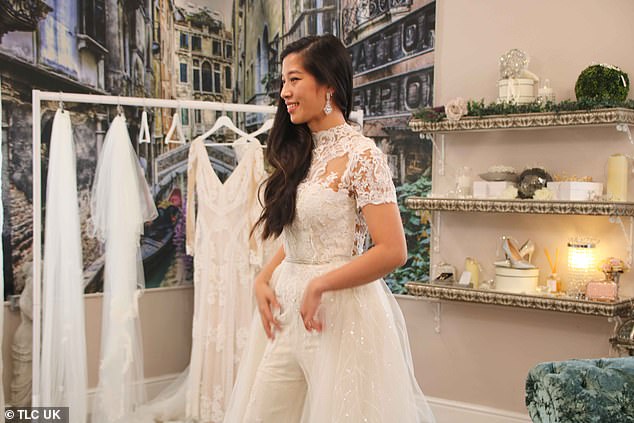 Kirsty’s mother Helen takes issue with the outfit and says the trousers remind her of the 1970s and John Travolta. Pictured, Kirsty in the jumpsuit dress

Looking to bring Kirsty’s vision to life, the super stylist picks out a stunning, lacy wedding jumpsuit with flared trousers for her to try on – but at first glance, Kirsty isn’t convinced.

‘There’s a lot going on with this jumpsuit,’ she says. ‘I did not see myself in anything with a high neck and sleeves, and I don’t think this is going to suit my body type.’

Feeding into Kirsty’s passion for customising her clothes, Gok brings in an overskirt to complete the outfit. Seeing herself wearing the jumpsuit and overskirt in the mirror, she quickly comes around.

‘Oh wow, I look so long!’ she gasps. ‘I’m really surprised by the high neck, it really isn’t as bad as I thought it was going to be.’

But out in front of her entourage, Kirsty’s worst fears are realised as her mum takes issues with the jumpsuit straight away – and says it gives her a ‘poochie belly.’ 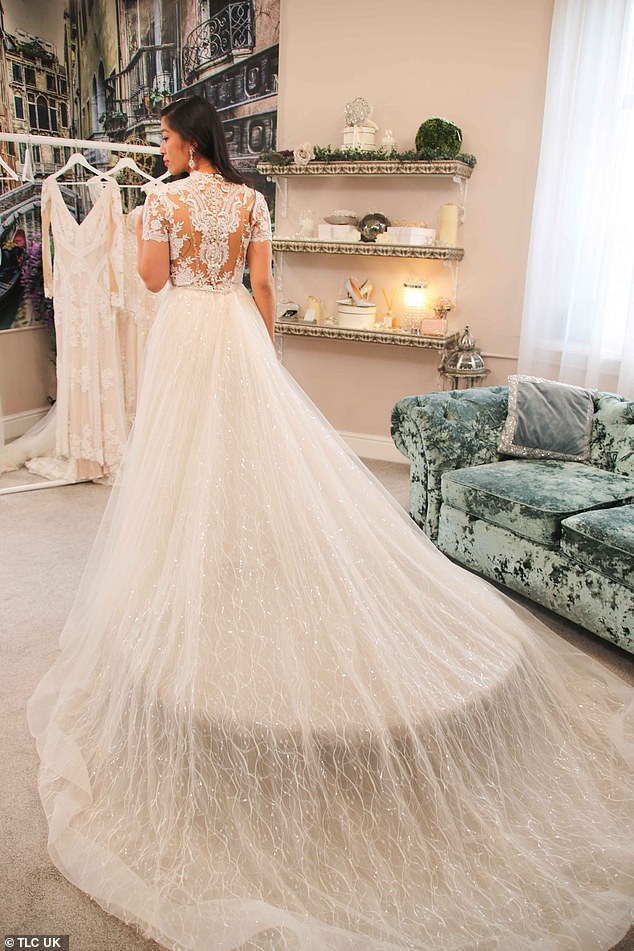 Kirsty’s mum Helen says she liked the ‘really classic’ look of the outfit – before her eyes went down and she saw the trousers. Pictured, the back of the jumpsuit dress

Confused, Gok jokes: ‘What the hell is a poochie belly? There is more fat on a chopstick, Helen!’

But after giving it some thought, Kirsty sides with her mum and admits she does feel like she has a ‘poochie belly’ in the jumpsuit.

Back upstairs, Gok presents her with a super sophisticated gown with a plunging neckline. But wanting to give Kirsty that unique look she’s looking for, he has another trick up his sleeve.

‘I have got one of the most beautiful gowns in this boutique, but I want us to customise it together to create something that’s going to be a one-off, unique fashion gown,’ he says.

Bringing out the scissors, Gok takes the brave decision to cut a split right up the lining of the skirt, allowing Kirsty to reveal more of her legs.

‘I’m literally shaking!’ he says, clutching the scissors, as he cuts the slit up to her thigh. 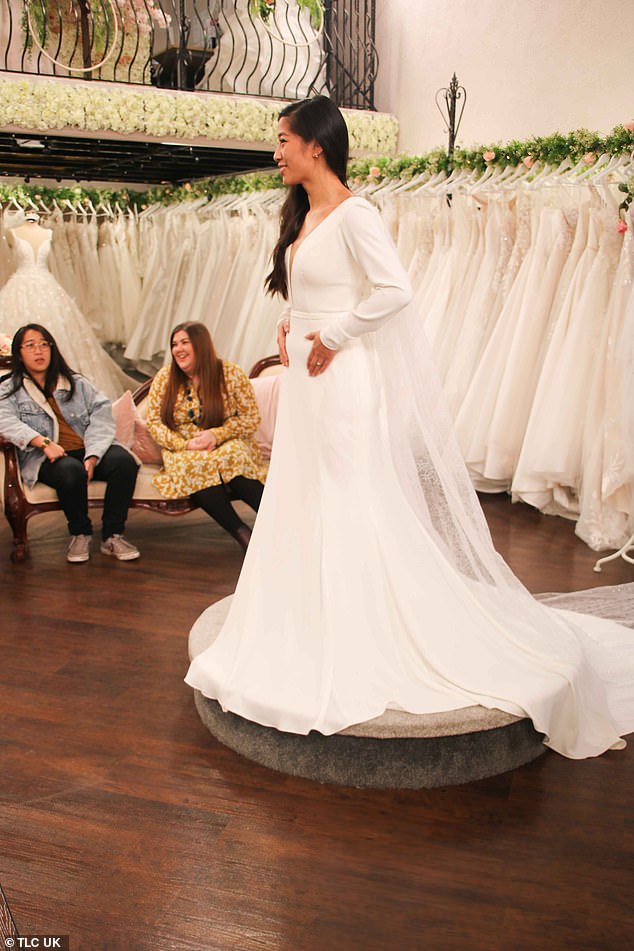 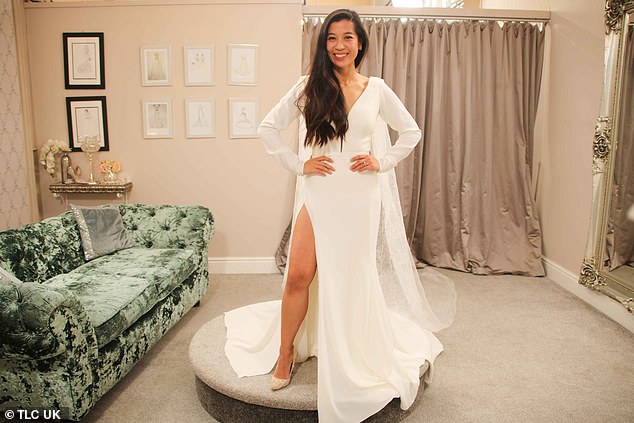 But once complete, Gok’s magic touch has the desired effect, and Kirsty looks amazing.

‘This is jaw-dropping,’ the bride-to-be beams. ‘It is unbelievable, I am so happy. I am so confident my mum is going to like this one because it is so different.’

Back downstairs, Kirsty’s sister Bobo tells her exactly what she wants to hear and enthuses: ‘This is the nicest dress I’ve ever seen you in.

But looking at her mum, Kirsty can tell that something is wrong.

‘I’m not sure about that leg hanging out like that,’ Helen eventually says. ‘I think it’s too high, she’ll be flashing her knickers and everything!’

Once again set back by her mum’s comments, Kirsty begins to lose hope of finding that signature look she’s desperate for.

Will Gok be able to turn the appointment around and find Kirsty the dress of her dreams and win over Helen?

Revealed: The first and last British soldiers to die in WW1

Government orders 15,000 new ventilators to fight coronavirus after model is approved by regulators – The Sun