A heartbroken mother has told how her anorexic daughter died aged just 29, weighing less than three stone after battling anorexia for more than a decade.

Sue Barnes, 60, said Kayleigh, from Ryde, Isle of Wight, had suffered from a severe case of anorexia nervosa since her late teens causing her to starve herself, an inquest heard.

Eventually, she died from multiple organ failure and her body shut down due to starvation.

By the end of her life, Kayleigh, who was described as ‘a light that shone brightly’, was barely able to walk, Isle of Wight Coroner’s Court heard.

She was an intelligent woman and understood what anorexia was doing to her, but she could not overcome it, her mother said. 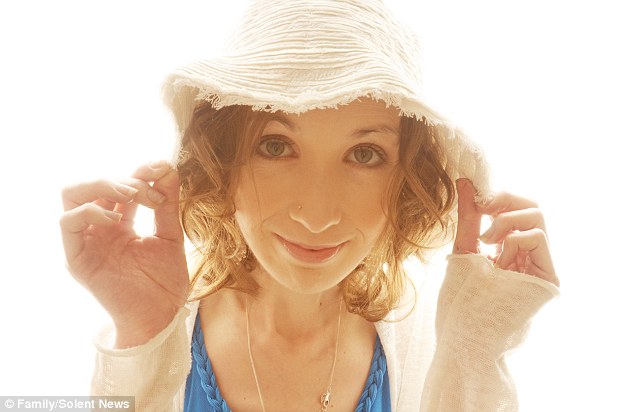 Heartbroken mother Sue Barnes, 60, has told how her anorexic daughter Kayleigh (seen at a healthier weight) died aged just 29 weighing less than three stone after battling anorexia for more than a decade

Sue is now campaigning to raise awareness of anorexia as well as writing a book about her daughter.

She said Kayleigh had been in and out of hospital throughout her life, including specialist eating disorder units and was well-known to mental health services.

But she and her mother fought against her being sectioned and put into a secure unit so that she could live independently in her own flat.

Kayleigh lived independently in Ryde for six months before being taken to hospital for the last time.

Sue Barnes said: ‘Being on a secure unit with enforced feeding didn’t work. Quite simply Kayleigh was unable to beat this vile illness. 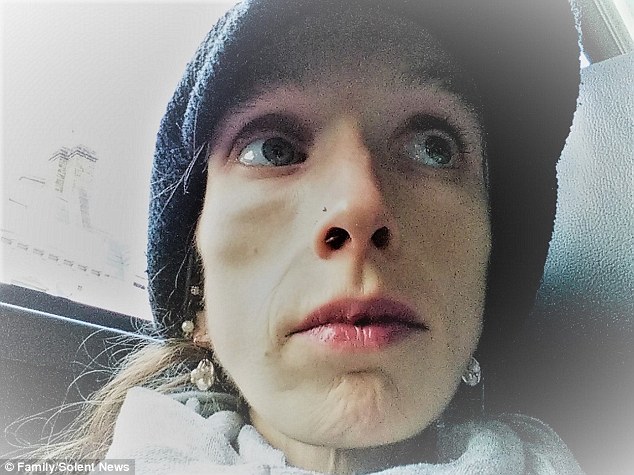 Tragically she died from multiple organ failure and her body shut down due to starvation, which started in her late teens (seen as she battled the disease)

‘I begged for her to be given the right to live outside this toxic environment.

‘Even if she lived for only six months, it was the quality of life that was imperative and not the quantity – she was of exactly the same opinion.

‘At her flat, I saw her every evening and helped her to clean, made sure she was safe climbing in and out of the shower and I plaited what was left of her once luscious hair.’

Anorexia is an eating disorder and a mental health condition.

People diagnosed with it try to keep their weight as low as possible by eating little or excessive exercise.

Men and women can develop the illness, however it typically starts in the mid-teens.

Those with anorexia can have a distorted image of their bodies, thinking their fat when in fact they are severely underweight.

Causes of the condition are unknown, but those with it have either low self-esteem, have a family history of eating disorders or feel pressured from society or place of work.

Long term health complications can include muscle and bone problems, loss of sex drive, kidney or bowl problems or having a weakened immune system.

Treatment for anorexia can include cognitive behavioural therapy.

Remembering their heartbreaking conversation, Sue said: ‘Kayleigh told me “I don’t want to die, but I can’t live like this”.

‘No one can ever know the pain she went through mentally and physically every minute of every day.

‘We spoke of death daily – it was a reality and she knew that this path would lead to a premature end, but she enjoyed her time with me, with her friends and acquaintances.’

And Sue expressed her gratitude towards her daughter’s psychiatrist, adding: ‘I applaud Dr Bowers, her psychiatrist, and Sam Whitewood, her care-coordinator, for having the strength and bravery to allow Kayleigh to live her life her way.

Paying tribute to her daughter, she said: ‘Kayleigh Rose Barnes was an amazing young lady, a special soul, a light that shone brightly if shortly.

‘She excelled in all things academically, she would get A* in everything and I expected she would go onto Oxford or Cambridge University to study history.’

Raising awareness for the heartbreaking illness, Sue highlighted the importance of recognising its severity.

‘It’s important that people begin to realise that anorexia is not a life choice or a frivolous decision, this illness has the highest mortality rate of any mental health illness,’ she said.

‘The only chance is for people to recognise the early stages of eating disorders and seek immediate help for there to be a chance of recovery.

‘Please be aware, speak to your GP, your school, seek help and please do not underestimate how quickly it can become entrenched.’

If you or someone you know is suffering from an eating disorder, visit Beat for free help and advice.

Prince Harry Has Arrived Back in the U.K. Two Days After Prince Philip’s Death