Australia would establish a Pacific defence school to train its neighbours’ armed forces under a Labor government in a promise that intensifies the national security debate over China’s potential military expansion into the region.

Experts are warning that Australia needs to rapidly build up its defence capabilities in the same way Ukraine did after Russia’s 2014 invasion to be ready for any conflict and “muscle up” to provide an effective deterrence. 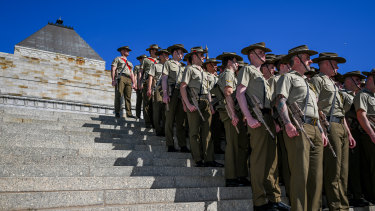 Soldiers from the Australian Army 4th Brigade 2nd Division attend Anzac Day at the Shrine of Remembrance in Melbourne.Credit:Joe Armao

Prime Minister Scott Morrison has been facing fierce criticism from Labor after Solomon Islands signed a security pact with China that could allow a Chinese military base to be built in the Pacific nation. Labor has escalated attacks on the Coalition over the deal’s implications for national security, which is usually safe ground for the government in an election campaign.

“Labor’s plan will restore Australia’s place as first partner of choice for our Pacific family,” Labor foreign affairs spokeswoman Penny Wong will say on Tuesday. “Scott Morrison has dropped the ball in the Pacific, and as a result Australia is less secure.”

The opposition will pledge $8 million a year to expand the reach of Australian broadcasting, $6.5 million over four years for the Defence school, and an extra $12 million a year for the Pacific Maritime Security program.

In an Anzac Day television interview, Defence Minister Peter Dutton cast back to the Gallipoli campaign and the rising dictatorships of the 1930s in backing up Morrison’s comments on Monday morning that the “arc of authoritarianism” was troubling the region.

Dutton was also asked about Morrison’s comment that Australia was setting up a “red line” in the Pacific over whether China would be allowed to build a military base in Solomon Islands. 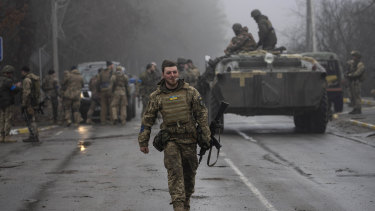 “The only way you can preserve peace is to prepare for war and be strong as a country. Not to cower, not to be on bended knee and be weak. That’s the reality,” Dutton responded on Nine’s Today show.

“We have to be realistic that people like Hitler and others aren’t just a figment of our imagination or that they’re consigned to history. We have in President Putin, at the moment, somebody who is willing to kill women and children. That’s happening in the year 2022.”

He said the Ukraine war was “a replay, in part, of what’s happened in the 1930s”, referring to Nazi Germany’s invasion of Poland and the beginning of World War II, while saying he believed many people of that decade wished they had spoken up much earlier.

During Darwin’s dawn service, Morrison spoke of coercion “troubling our region again” as Australia grapples with the diplomatic and strategic upset of China’s security pact with Solomon Islands.

“An arc of autocracy is challenging the rules-based order our grandparents had secured,” the prime minister said.

Addressing media in Darwin on Monday, Labor deputy leader Richard Marles said Australia’s strategic circumstances were as complex as at any point since the end of World War II, “and certainly, we need to prepare, but we have not seen the preparation under this government”.

“We need to see better investment and better engagement in the region … rather than react after the fact,” he said.

Morrison did not face a media pack on Monday, but when asked by a pub patron his view on “helping Ukraine but not the Solomon Islands”, Morrison replied, “we help both”, before walking away.

Earlier this year the Coalition promised to boost the size of Australia’s 60,000-personnel defence force by a third by 2040, costing more than $38 billion. Last week Morrison also committed $428 million in upgrades to airbases, and earlier this month he announced an international agreement to build long-range missiles.

He has argued that the Coalition has spent heavily in Solomon Islands and he has a personal commitment from Prime Minister Manasseh Sogavare that the nation would not allow China to build a naval base there.

Australian Strategic Policy Institute defence and national security director Michael Shoebridge said Dutton was sending the message that deterrence was a combination of credible military power and the political will to use it, but Australia’s defence capacity was “achingly slow”.

“We’re spending a lot of money, but we’re not delivering the military power in a relevant timeframe. Most of what the defence organisation is delivering is in very slow, long-term projects, like submarines and frigates,” Shoebridge said.

He said Ukraine rapidly increased its military capacity following the Russian invasion of Crimea, which saw little resistance, with the acquisition of arms, patrol vessels and vehicles with the help of foreign aid.

“We need to be more like Ukrainians and get those practical increases in our military power much faster than we really are at the moment,” Shoebridge said.

“We really need to speed up our efforts. We’ve had three generations grow up since the Battle of Midway and people have become complacent.” 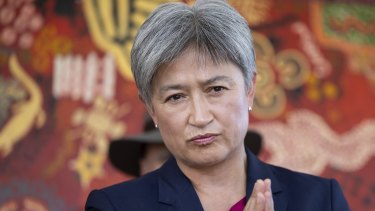 John Blaxland, of the Australian National University’s Strategic and Defence Studies Centre, resisted comparing Australia with Ukraine but said there was no doubt Australia needed to “muscle up”: “We need to have more reach, more endurance, and you’ve got to beef it up, beef up the capability.”

However, he warned that if Australia only bolstered its military capabilities at the expense of diplomacy then “we’re missing our cues”.

Blaxland said the Defence Minister’s televised comments were “a bit of a red rag to a bull” regarding Australia’s relationship with both the Solomon Islands and China, whose leaders would react against being spoken down to.

“We have a track record for speaking too loudly and carrying a stick that’s too small,” he said, adding that Morrison’s talk of a red line being crossed risked “making things worse for Australia”, including in its relations with Indonesia, which has invited Russian President Vladimir Putin to its G20 summit.

“The biggest threat to our national security is China … and you wouldn’t be able to find a veteran anywhere that doesn’t think that as well,” Thomson told Sky News.

Labor is promoting a whole-of-government approach to regional stability should it win the election, combining defence, diplomatic and economic power to anchor the region, with a $6.5 million defence training school for Pacific Island nations as one of the key tenets to strengthen links between nations.

Labor says the new school, to be led by the Australian Defence Force, will focus on operational training for non-commissioned officers from Pacific defence and police forces.

The opposition is also promising to double its funding to the Pacific Maritime Security Program’s aerial surveillance over countries’ exclusive economic zones, as well as delivering a broadcasting strategy that boosts the reach of Australia’s public and commercial media.

That pledge involves increasing training for Pacific journalists, and more funding to increase the transmission of ABC International, as well as expand Australia’s media presence across the Pacific, South-East Asia and South Asia.

Cut through the noise of the federal election campaign with news, views and expert analysis from Jacqueline Maley. Sign up to our Australia Votes 2022 newsletter here.

I’m an interior expert, there are six things which make your home look cheap, including a common washing machine error