The National Gallery of Australia has acquired the most expensive work of art in its history, commissioning a monumental $14 million stainless-steel sculpture that it hopes will set a new standard for Australian public art.

Australian artist Lindy Lee’s Ouroboros will be a 13 tonne, 4 metre-high torus of reflective recycled metal that will be installed in the gallery’s garden in 2024. 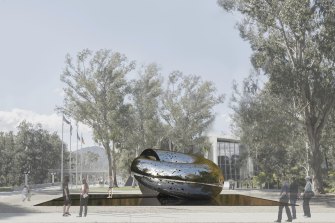 A digitally rendered image shows how Lindy Lee’s Ouroboros sculpture will look in the National Gallery of Australia garden.Credit:NGA

The sculpture sets a record for the gallery, whose previous most expensive purchase was James Turrell’s “skyspace” Within Without for $8.2 million in 2010. Adjusted for inflation, the most expensive purchase this century was Lucian Freud’s oil painting After Cezanne, bought for $7.9m in 2001. Jackson Pollock’s Blue Poles, considered now by far the gallery’s most commercially valuable painting, was bought in 1973 for $1.3m, the equivalent of $12.6m today.

The NGA last year drew criticism for a radical change of policy on acquisitions after it decided to spend its Collection Development Fund on fewer, but more valuable works that marked a moment of resolution or breakthrough for a particular artist, or a moment of innovation in art.

Director Nick Mitzevich said the gallery had decided to invite an Australian artist to make “their most ambitious work” for the sculpture garden in celebration of the gallery’s 40th anniversary.

It will take two and a half years to create and install Ouroboros, which will sit near the gallery entrance, embodying a message of renewal and, said Lee, “how f–king awesome” are humanity and the cosmos. 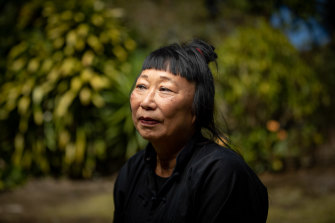 The public will be able to walk inside the perforated sculpture, which will stream light from within at night. Outside the sculpture reflects the world, inside it is matte black, pricked with vignettes of garden and sky.

Its self-consuming torus shape references the ouroboros, a mythical snake eating its tail, a symbol of renewal and regeneration that has fascinated artists, writers and philosophers for millennia. Its first known appearance was on a shrine in the tomb of Tutankhamun.

“[Mitzevich] literally just rang me and said ‘Lindy, I want you to be as ambitious as possible’,” the Byron Bay-based artist said of their phone call in December.

Lee, who is one of Australia’s most successful living artists and recently had a major survey at the Museum of Contemporary Art in Sydney, said she often reached the limits of practicality and affordability and pared back her imagination. This time she’s reaching for the stars. 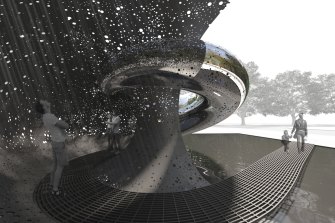 A computer generated image showing the inside of Lindy Lee’s Ouroboros sculpture at the National Gallery of Australia.Credit:NGA

“The heart of my practice is all about the deep interconnection between humanity and the cosmos,” Lee said. “My thought was to make a sculpture of this magnitude, that has this idea of inclusivity and a deep and intimate experience with the things of the cosmos.”

Lee, who frequently draws on her Australian and Chinese heritage in her work, said public art offered a “democratic space”.

“This may sound really cheesy but we actually belong to this incredible mystery: the mystery of who we are is impossible to describe and that’s f…king awesome. For me, a great piece of art brings us to this mutual space of mystery and … puts a little magic in our lives, to give us a longer perspective,” she said.

“And then we’re left with the question ‘what the hell was that?’”

While Lee will be well-paid for the work and the fee will cover some of her studio assistants’ salaries, most of the cost of the piece is in its construction.

It will be cast in pieces remotely, assembled on-site, then polished to a mirror finish. Lee’s creative team consulted world experts on modern sculpture, including engineers who work with groundbreaking artists such as Anish Kapoor and Richard Serra, for advice.

Mitzevich said the gallery had looked around its sculpture garden and “realised that women artists were not really represented adequately, so we worked out we wanted to have an Australian woman”.

They were “blown away” by Lee’s pitch.

“This wasn’t just an iteration of something else she’d done, it was a major development. It’s such a captivating work from a conceptual and a material point of view. The work is about the cycle of life. It’s relatable: it’s a big idea that we all have to grapple with,” he said.

“It’s both about the universe and also about the micro. It’s both an engineering and a creative feat. We hope that it will really elevate the position of public art in Australia.”

The National Gallery of Australia’s most expensive acquisitions

(cost at the time of purchase, and adjusted for inflation*)

* Does not include increases in value of work over time

The Truth About Mark Harmon’s Wife

Chris Evans Thinks You Should Adopt a Dog Right Now!

Always wanted to learn ballet? Get ready to plié with this ballerina’s tutorials