“Australia has already met and beaten our … 2020 targets and indeed Australia will beat and meet our 2030 targets as well,” Mr Morrison said. 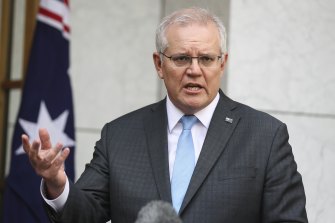 The government’s plan to reduce emissions, released on Tuesday, stressed industries, regions and jobs would not be put at risk. The target of net zero by 2050 will not be legislated.

Mr Morrison was accompanied by Minister for Industry, Energy and Emissions Reduction Angus Taylor, but Deputy Prime Minister and Nationals leader Barnaby Joyce was not present. Nationals MPs backed the goal in a tense meeting on Sunday that cleared the way for Tuesday’s policy announcement, which includes $19 billion in investments for low emissions technologies including solar and clean hydrogen by 2030.

Mr Morrison will fly to Rome on Thursday to attend the G20 summit before spending two days in Glasgow for the United Nations climate talks.

The Prime Minister said the plan to cut emissions was not a plan “at any cost”.

He promised the target would not be an end to coal or gas production or exports and would not increase energy bills.

“It will not impact households businesses or the broader economy with new costs or taxes imposed by the initiatives that we are undertaking,” he said. “It will not cost jobs, not in farming, mining or gas. Because what we’re doing in these plans is positive things, enabling things.

It also would not be a “set and forget” program, with five-yearly reviews from the Productivity Commission. The first review is set for 2023 and will look at the socio-economic impact of the plan.

Mr Taylor said the plan to achieve net zero by the middle of the century was achievable, thanks in part to the country’s performance to date on reducing emissions.

“Australia versus even developed countries has performed extremely well, with a reduction of almost 21 per cent since 2005,” he said.

Mr Taylor said carbon offset would be an important part of the plan, noting that Australia had 90 million hectares of productive agricultural land. Another focus would be reducing the costs of low emissions technologies.

“We’re looking at the customer and technology trends, shaping those trends to our advantage; and on the back of that, ensuring we have a portfolio of technologies that can deliver the outcome we want to deliver which is head zero by 2050,” Mr Taylor said.