Mothers debate using ‘no touching’ signs on pushchairs to discourage strangers from picking up their babies – so are they helpful… or just ‘hysterical’?

A mother has divided opinion on a parenting page after sharing a picture of a ‘no touching’ sign to hang on baby’s pushchairs or car seats and protect them from germs.

The parent, known only as Heather, posted the photo to the US-based Breastfeeding Mama Talk page with the caption: ‘Don’t touch other people or their children. It’s creepy. Don’t be creepy’.

The sign, attached to a baby’s car seat, reads: ‘No touching, your germs are too big for me’.

And her post quickly went viral, garnering 9,000 likes, over a thousand comments and over 3,000 shares in just a day.

While many mothers said they approved of the sign, and admitted they hated their children being touched by strangers, others branded it ‘hysterical’, and argued that children need to be exposed to day-to-day germs in order to strengthen their immune systems. 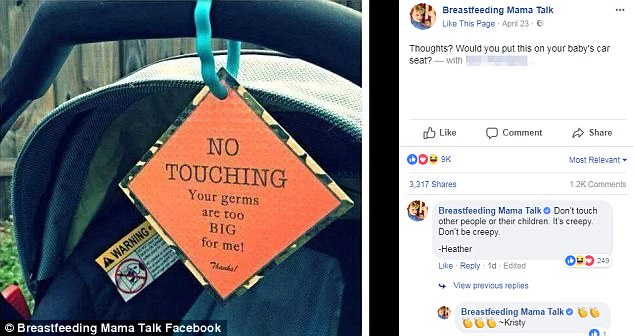 One mother slammed the sign, writing: ‘… how did we all survive…. we were touched, handed to strangers in the grocery while Mom dug thru her purse cause we had no baby carrier, no car seats, we sat in carts or someone stepped up to help a mom with two or more littles.

‘As far as the park, we ate rocks, bugs, dirt and who knows what else we ate….. I’m not saying I’d go back but we did survive the ‘ stranger who admired us with a simple touch’ (sic).

However another mum revealed she encourages her three-year-old to ‘slap’ away the hands of strangers who touch her hair.

‘My 3 year old slaps hands. I 100% allow it. She has super curly hair and people always want to touch it. They’ll just walk right up and start pulling on curls… Not acceptable,’ she said. 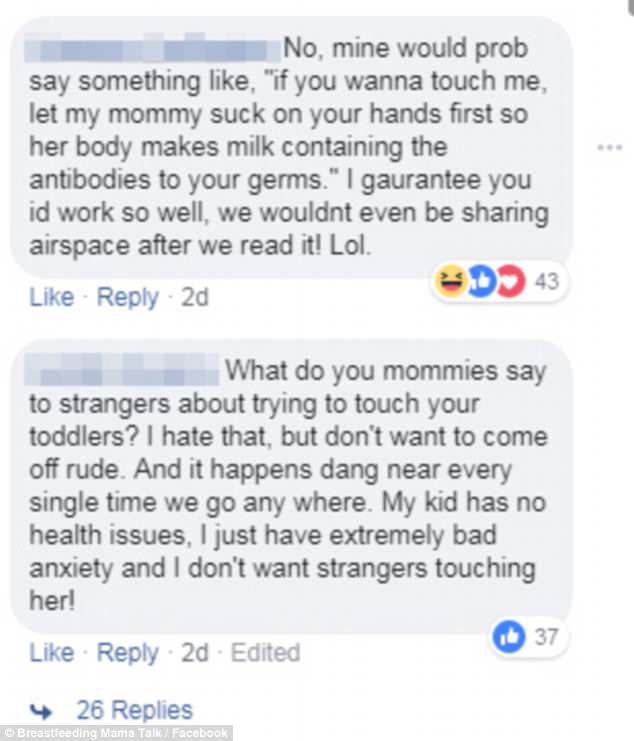 Many mothers welcomed the sign, admitting they hated their children being touched by strangers

And another parent agreed with her, hitting out at ‘rude’ strangers who approached her youngsters.

‘I slap hands. Seriously, my youngest is 6 months and my oldest is 3. If I’ve repeatedly asked you not to poke, pinch, grab or hold my baby – don’t touch her. It’s not so much the germs (anymore), but you don’t just go up and touch someone else’s baby’, she wrote.

But many disagreed, arguing people were becoming overcautious with their children.

‘I have had 4 big healthy boys, all have been bounced around people and played on the floor since they came out and I wouldn’t change a thing,’ one parent wrote. 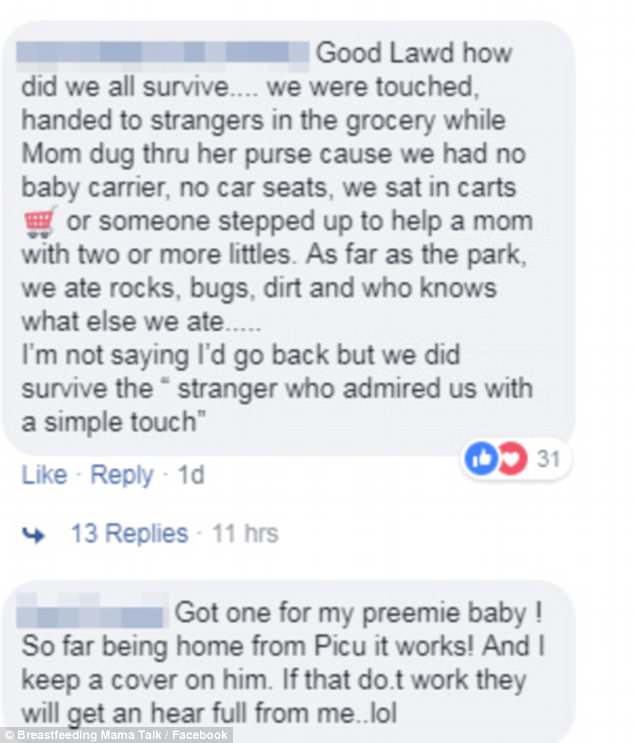 Others branded it ‘hysterical’, arguing that children should be exposed to germs in order to strengthen their immune system

‘Barely ever sick and handle immune challenges well. People are ridiculous with babies now. Unless your baby is a preemie (premature) or somehow sick, get that kid in some dirt.’

Another mother agreed, adding: ‘My babies were born healthy and on time or after. We have a big family and couldn’t keep all the germy kids away. Both kids are happy and healthy now after being exposed to countless germs. I welcome boosting the immune system!’

And a third wrote: ‘If my baby was immuno-compromised (premature, etc) then yeah. But otherwise, no. I get it’s a big scary world but research is proving that we are doing kids a disservice by wrapping them in antibacterial bubbles. Dirt, germs, and exposure build our immune systems and make them strong.’ 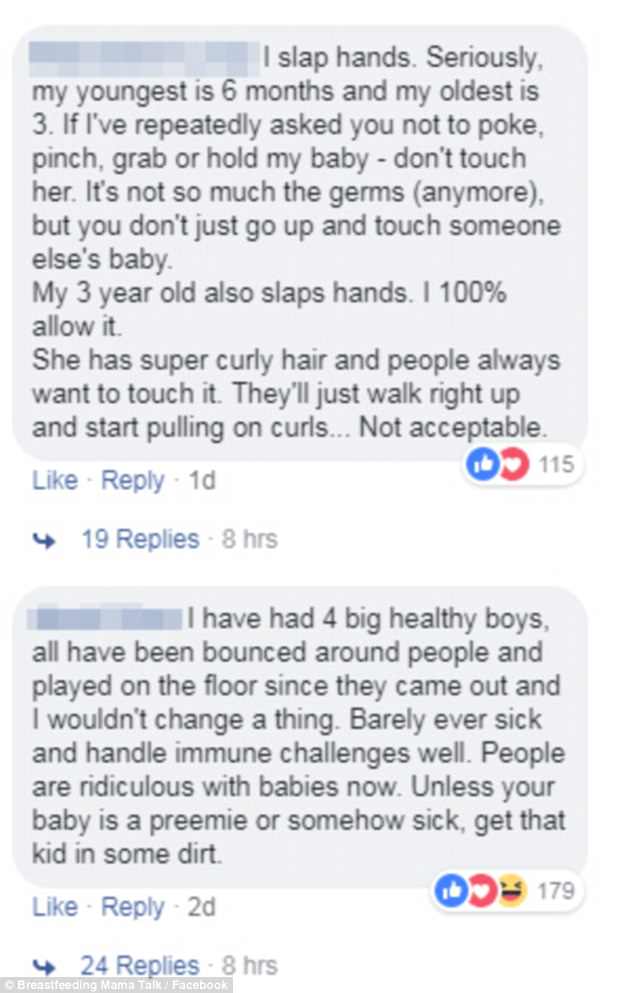 However others argued that it depended on individual circumstances, as some babies were more susceptible to germs than others

However others argued that it depended on individual circumstances, as some babies were more susceptible to germs than others.

‘My son was born with major heart defects and undergone surgeries,’ one father explained. ‘So he has a compromised immune system. Pretty sad you even have to post a sign these days cause people just don’t have common sense!’

Another agreed, offering up an easier solution than having to tell strangers not to touch the baby.

She wrote: ‘My oldest son was born at 34 weeks. I kept this mesh summer car seat cover on him all the time in public. Kept people from touching him but looked like I was keeping the bugs off him’.

‘I’m not afraid of the germs, I just don’t like creepy strangers trying to touch my babies! Keep your hands to yourself, people!’ she argued.

Daily numerology: What the numbers mean for you today Sunday March 7