Norma Miller, who danced the Lindy Hop on Harlem sidewalks as a child, and as a teenager dazzled crowds on international tours in the 1930s and early ′40s doing the same kicks, spins and drops that had made it a Jazz Age jitterbug craze, died on Sunday at her home in Fort Myers, Fla. She was 99.

Her longtime manager and caretaker, John Biffar, announced her death.

Among the cultural prodigies who arose after the aviator Charles A. Lindbergh’s “hop” from New York to Paris in 1927 — hence the dance’s name — Ms. Miller, known as the “Queen of Swing,” was the youngest recruit and last survivor of the original Lindy Hoppers, the all-black Herbert White troupe that broke in at Harlem’s Savoy Ballroom and popularized the Lindy Hop with Broadway shows, tours of Europe and Latin America and Hollywood films.

In the movies, she danced and sang in memorable black-cast numbers in the Marx Brothers’ “A Day at the Races” (1937) and in the madcap Olsen and Johnson comedy “Hellzapoppin’ ” (1941). She later thrived as a choreographer, comedian, television actor and author, and was honored by the National Endowment for the Arts in 2003 as a conservator of the Lindy Hop.

With her own black companies, the Norma Miller Dancers and Norma Miller and Her Jazzmen, she joined early fights to undermine segregation in the nightclubs and casinos of Miami Beach and Las Vegas, where black entertainers — even stars like Nat King Cole and Sammy Davis Jr. — drew big crowds but afterward had to leave through the kitchen and stay in segregated accommodations.

A child of poverty whose father died before she was born, Ms. Miller and her mother and sister lived in a cramped, noisy Harlem apartment, whose back windows looked out on the ballroom that would be her steppingstone to stardom. On the horizon were professional friendships with Duke Ellington, Count Basie, Ella Fitzgerald, Billie Holiday, Artie Shaw and other legends of swing and jazz.

She was discovered on Easter Sunday 1932 by the great swing dancer Twist Mouth George Ganaway as she flashed her moves on the sidewalk outside the Savoy, a blocklong rhythm factory on Lenox Avenue between West 140th and 141st Streets. She was only 12, too young even to get into the swanky, mirrored emporium of swing that Langston Hughes called “the heartbeat of Harlem.”

“I was a precocious youngster,” Ms. Miller said in “Queen of Swing,” a 2006 documentary on her life. Mr. Ganaway spotted her performance and gave her a Coca-Cola. From inside the Savoy, a swing band’s hard-driving sound beat its way to the sidewalk, and there she and Mr. Ganaway danced.

“He swung me out,” she recalled. “I don’t know if I ever hit the floor. He just flew me all around.” 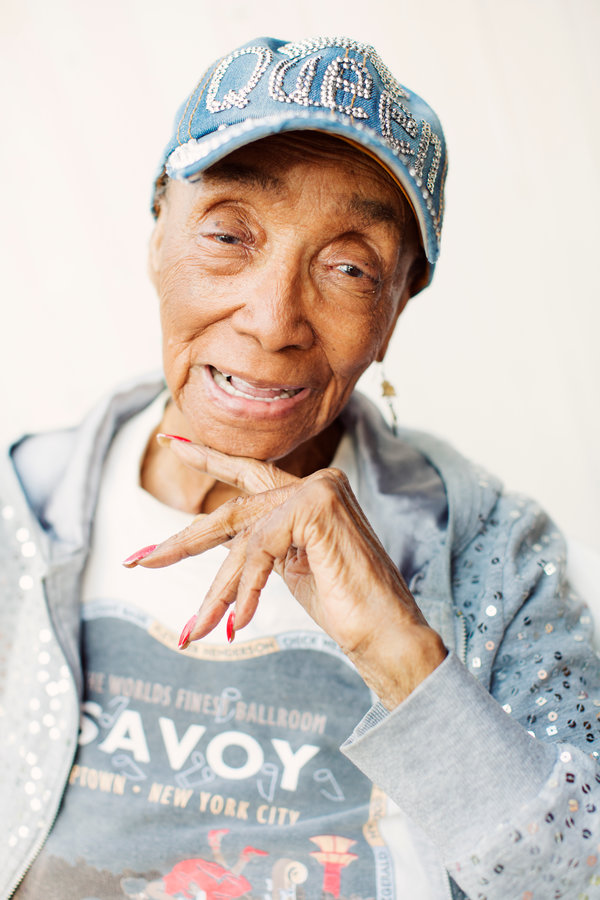 Norma, wiry and nimble, already knew some Lindy Hop moves: the swing out, the hip-to-hip, the side-flip, the sugar push. Mr. Ganaway was impressed. He took her into the Savoy, ignoring the technicality of her age, and they were soon captivating the regulars with through-the-legs slides, over-the-head flips and acrobatic aerial lifts.

Later, they won a Lindy Hop contest at the Savoy.

She continued to improve. After watching her win the Harvest Moon Ball dance contest at the Apollo Theater in 1934, Herbert White invited her to join his new troupe, the Lindy Hoppers. She agreed, and at 15 came under the tutelage of Mr. White’s choreographer, Frankie Manning, the master of swing-era dances, who was the inspirational coach of the Lindy Hoppers.

What followed over the next few years was the professional education of a dancer: the wider world of hard work and the excitement and grind of travel to faraway places, of dancing in Broadway shows and on a seven-month tour of Paris, London and other European cities, then performances across America with Ethel Waters and a girl’s first adventure in Hollywood.

She was not quite 18 when she met the Marx Brothers, Allan Jones and Maureen O’Sullivan on the Metro-Goldwyn-Mayer lot and made her film debut in “A Day at the Races.” She danced and sang with the Lindy Hoppers in the well-known black-cast barn scene number, “All God’s Chillun Got Rhythm,” which featured Ivie Anderson and Duke Ellington’s orchestra. The Lindy Hop sequence was nominated for an Academy Award for dance direction.

Ms. Miller and the Lindy Hoppers were showcased in the Broadway musical revue hit “Hellzapoppin’ ” in 1938 and in 1941 appeared in the Hollywood version, both of which starred Ole Olsen, Chic Johnson and Martha Raye. It was a slashing satire of show business, with slapstick mayhem, horned demons, collapsing staircases and fun house slides that led straight to hell.

In a sequence widely regarded as the best example of the Lindy Hop on film, four couples in backstage-workers’ get-ups swing out, one after the other, into acrobatic shines at a frenetic tempo. Ms. Miller and Billy Ricker, dancing in chefs caps like animated rag dolls, execute breathtaking flips, slides, kicks, splits, lifts and lightning moves that seem to defy gravity and human speed limits.

After completing the filming, the Lindy Hoppers flew to Brazil and were performing in Rio de Janeiro when the bombing of Pearl Harbor plunged the United States into World War II. Unable to find transportation home, the troupe toured for six months in South America before returning home exhausted and nearly broke.

With the war on, the Lindy Hop began to fade as musical tastes changed. In 1942, Ms. Miller made her last tour with the Lindy Hoppers, appearing in New York, Washington and Baltimore. When her dance partner was drafted into the military, she left the troupe, which disbanded soon after. While her career went on for decades, it never returned to the high notes of her early years.

The Savoy Ballroom, which opened in 1926 and brought blacks and whites together in an era of racial segregation, was torn down in 1958 to make way for a housing project. On any given night, thousands had packed its hardwood floors as swing music by Ellington, Basie or Chick Webb inspired the Norma Millers.

“Black girls didn’t have many outlets,” she told a Florida radio station in 2015, eight decades after her heyday. “You had laundry. You had hairdresser. Or teacher. Now, I didn’t qualify for any of those. I could dance. I could just do it naturally.”

Norma Miller was born in Harlem on Dec. 2, 1919, the second daughter of Norman and Alma Miller, immigrants from Barbados. Her father, a shipyard worker, died of pneumonia a month before her birth, and her mother worked as a charwoman to raise her and her sister, Dot. Norma was fascinated with dance, and her mother, though struggling to pay rent, enrolled her in Saturday dance classes. Norma danced at her mother’s “rent parties,” as friends chipped in.

In the Roaring Twenties, music was everywhere in Harlem, but after 1929, when the Millers moved into a tenement apartment on West 140th Street, swing from the Savoy boomed nightly through their back windows. Looking out on the ballroom’s rear windows, Norma saw dancing patrons as shadows moving behind the curtains, doing the Charleston and the Lindy Hop.

She and her friends practiced the dances in the gym at her school, P.S. 136, and after church on the sidewalk outside the Savoy, where Mr. Ganaway discovered her. As her talents grew, she was enrolled at the Manhattan School of the Arts on the Upper West Side.

After her meteoric Lindy Hop career, Ms. Miller reinvented herself in 1952. She founded and choreographed the Norma Miller Dancers, a jazz-dance troupe that toured America and Australia for two years, then joined Count Basie on a national tour. In the pervasive racial segregation of the day, Ms. Miller and her group faced daily reminders of their secondary status in renting rooms, riding in the back of buses, dining in black eateries and sometimes confronting white protests.

In 1957, the Norma Miller Dancers played long-running engagements in Miami Beach and Las Vegas as part of an extravagant production called the “Cotton Club Revue.” The show, starring Cab Calloway and a 48-member all-black cast, drew huge nightly audiences for months. But it also stirred racial unrest, as had been anticipated: Every cast member was given an identity card issued by the police, and after each show had to retreat to a “colored” hotel.

“We were to be the first all-black show to play the Beachcomber in Miami Beach,” Ms. Miller recalled in “Stompin’ at the Savoy: The Memoir of a Jazz Dancer” (2003, with Evette Jensen). “During rehearsal, racial tensions surfaced. The day of our big dress rehearsal, there were headlines in The Miami Sun telling Murray Weinger” — a Miami nightclub owner — “that they didn’t want his colored show on the beach.”

Besides “Queen of Swing,” John Biffar’s documentary on her life, Ms. Miller appeared in at least nine other documentaries on dance, black comedy and other subjects, including Ken Burns’s PBS series “Jazz” (2000). She was the subject of a children’s book by Alan Govenar, “Stompin’ at the Savoy: The Story of Norma Miller” (2006). Her own books include “Swing Baby Swing” (2010, with Darlene Gist), a chronicle of swing dancing over her century.

Ms. Miller, who never married and left no immediate survivors, had a long-term relationship with fellow Hellzapoppin’ performer Roy Glenn, who died in 1971. She traveled widely to appear at swing and jazz festivals and give talks on her dancing days. “The Savoy was our community,” she told Bobby White in one interview in 2016, “and the dance floor was the place we found freedom.”

In 2018, Ms. Miller appeared at the Herrang Dance Camp in Sweden, an annual gathering since the 1980s of Lindy Hop lovers from around the world. “A place like this is unbelievable,” she said. “It’s like Brigadoon” the musical about a Scottish village that magically reappears once every 100 years.

WhatsApp update will help you keep your texts, photos safe from hackers