Home » Lifestyle » This Is Not A Drill: The Fab Five Have A Book Coming Out This Fall

Can you believe? Bobby Berk, Karamo Brown, Tan France, Antoni Porowski, and Jonathan Van Ness, a.k.a The Fab Five from Netflix’s Queer Eye reboot, are writing a book, and it will be available for purchase before the holidays. Yes, that means you may finally be able to teach your boyfriend how to "French tuck" his damn shirt, and you won’t even have to sign him up for a reality television show to do it.

The book, titled Queer Eye: Love Yourself. Love Your Life., will be released on Nov. 13, and it will be co-authored by all five of the meticulously groomed TV stars. Published by Clarkson Potter, the book will give fans a peek behind the cameras and feature lifestyle tips from the Fab Five. In other words: Tan France is gonna teach you how to coordinate your socks with your outfit, and Antoni Porowski is really going to blow your mind when he explains all the things you can do with an avocado. Or so I assume.

Each member of the Fab Five will author the bulk of their own sections about their respective specialty — fashion, design, culture, food, and beauty — but they will all share a few of their own tips in each of the other sections, too. That means that you might just get to read about Karamo Brown’s beauty routine or Bobby Berk’s’s favorite recipes. 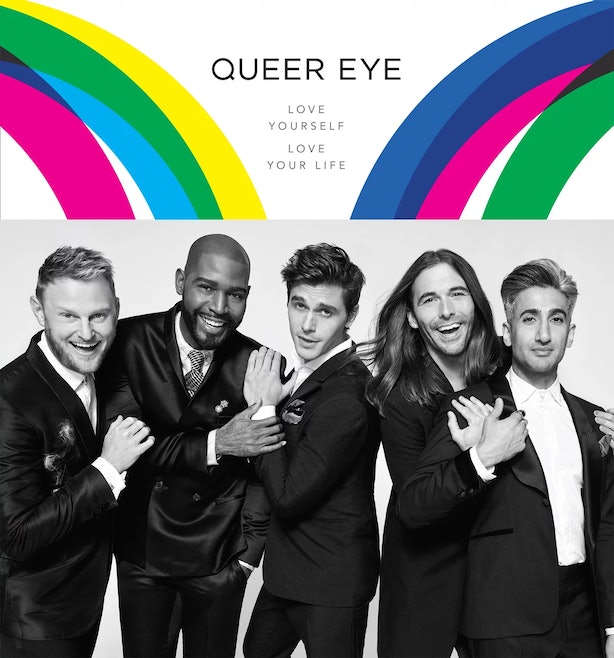 According to People, the book will also feature "hip tips" from the Fab Five, which sound like general nudges about stuff you should buy and do and put on your face, and "five-minute make betters" that mirror the ones shown at the end of episodes. But don’t worry, fab fans, this book isn’t just about making your life better; it’s about knowing the Queer Eye men a little bit better, too. Because even though you’ve seen every episode (twice) and follow them all on Instagram, there’s so much left to learn about the stars of the show.

“I love that the audience who reads this book will get a greater insight into things that we did on the show but for me, it’s way more about them getting to know us more,” Tan France told People. “I think the reason why this show has been so successful is they’re not just connecting with the heroes, they’re connecting with us five.”

But, as they say, things just keep getting better because this isn’t the only Queer Eye book being published in the next year. In 2019, Porowski will release a cookbook, Antoni in the Kitchen, and France will release a memoir Tan France: Love, Family, Queer Eye, and What I Wore, which will include personal stories from his childhood growing up gay in a traditional, Muslim family in a predominantly-white area of Northern England and his experiences in the world of fashion and television. Karamo, Jonathan, and Bobby: I’m going to need you to write your books, A.S.A.P.

Rhonda Burchmore: ‘If I spoke up, I would’ve been on the first plane home’

Boko Haram burn houses in Chibok where they kidnapped 276 schoolgirls