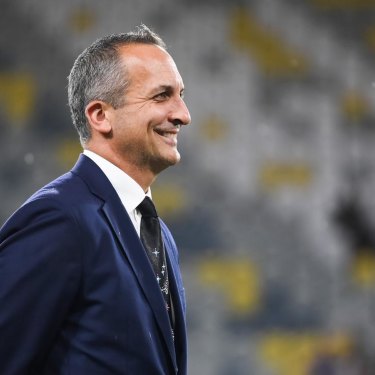 It will be 7.30pm on Sunday, and two groups of players from the South Sydney Rabbitohs and the Penrith Panthers will face each other in the rugby league grand final in Queensland for the first time in history.

The National Rugby League chief executive, Andrew Abdo, will take his seat for the game. An observant passerby, scanning his face, will probably discern a keen, tense look that chief sport administrators adopt for such a momentous day. And, the observer would be right, for Abdo will be staring intently at the action from his lounge room inside his north shore home in Sydney, almost a 900 kilometre drive down the Pacific Highway from Brisbane. 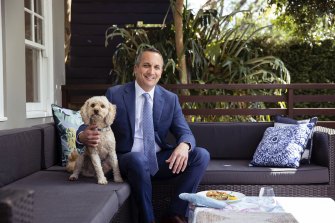 Instead, tomorrow he will be at home in Roseville with his partner Anna, children Megan, 14, and Anthony, 12, and the family cavoodle Buddy as the game plays out on the TV screen.

And, he says, these grand final plans might be upended again if Brisbane is locked down because of a Delta outbreak. Such a scenario would lead to an emergency airlift of players, team staff and match-day officials to the Queensland Country Bank Stadium in Townsville.

Abdo will be white-knuckle riding his mobile phone and iPad until the referee blows the whistle to start the game. The name of his uncompromising chairman, the most powerful man in rugby league, Peter V’landys, of course, will probably flash on his screen frequently.

“It’s quite surreal to not be there at the grand final in person,” Abdo says, “but certainly, that’s the way of the world at the moment.”

Indeed, that is the way of the COVID-19 pandemic lockdown in NSW and Victoria that has marooned Abdo in his home state. And why we are lunching and trading our views online rather than in person. 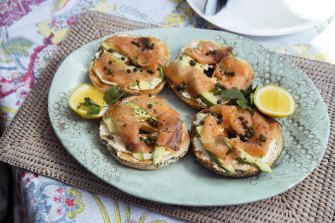 Abdo opts for home-prepared bagels with cream cheese and salmon, which is more corporate box fare, befitting his status mixing with the titans of sport, business and government.

I choose to replicate the general admission experience at a Cronulla Sharks home game with a meat pie and beer. First, I leave a can of VB in the sun, walk around the block for 20 minutes, on my return, I shake up the can and pour its contents into a plastic receptacle. I then pull a tray of pies from the oven and douse them in watered-down tomato sauce.

It’s heaven on a stick. The pie is consumed quicker than you can say Artie Beetson, the Rooster’s star and rugby league Immortal whose renowned skills as a footballer only slightly overshadowed his gastronomic indulgences. The golden crust flakes are washed down by amber fluid.

Anything for a laugh in lockdown, right? Abdo smiles in a benign manner, either quietly amused or bemused. I dare not ask which.

The pandemic, of course, looms large in our conversation. 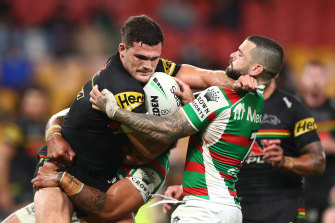 Souths will take on Penrith in the NRL grand final Sunday for the first time in Queensland.Credit:Getty

Abdo and his ever-restless chairman Peter V’landys have seen the NRL laid low by it over the past two years.

Last year’s shutdown of the game resulted in five competition rounds being shaved from the schedule. That forced the NRL to negotiate down its broadcast deals with Fox Sports and Channel Nine (the owners of this masthead).

The governing body also spent about $16 million just in costs related to the pandemic last year, which included the implementation of biosecurity measures and other expenses, such as relocating the New Zealand Warriors to Australia.

It’s estimated that relocating this year the whole NRL competition to Queensland, including players and their families, costs between $12 million to $15 million a month.

Abdo says they have reduced their expenses by $50 million a year and procured some new commercial revenues, including new commercial partnerships with Ampol, DoorDash and Sky TV in New Zealand.

How will this professional sport survive, rebuild its links with fans, club members, sponsors and broadcasters? How does society re-emerge after being under siege for so long?

The chief executive smiles. Starting anew is something he knows all about. It is why he and his family left South Africa – to escape the crime and violence in Johannesburg and seek out a new beginning here. It was the hardest decision of his life to leave all his family and friends and the country he loved.

The South African-born Abdo, 44, was a managing partner in a successful corporate finance business, a part-time academic and a non-executive director of a forestry business. His was a career on the rise. Yet in 2012 he decided to walk away in his mid 30s for his family’s well being.

“We had our home completely ransacked and obliterated [while] on a weekend away,” he says. “There was another time I’d been away for business and had a phone call from my wife, who’s at home with the children, nervous about someone attempting to break into the house, and I was a two-hour flight away. That was very traumatic.

“We’ve also been driving and had a windscreen smashed by [someone throwing] spark plugs. And there’s the constant fear of being robbed at knifepoint or gunpoint, or whatever the case might be.

“I had anxiety over whether or not I could protect my wife and kids in that environment. It became too much.”

The family had holidayed in Australia a number of times. They fell in love with Sydney and welcomed the warmth of its climate and its natural beauty. Nine years ago they moved to Australia, Abdo took a few steps back by joining Deloitte as a director in Sydney to facilitate the fresh start. 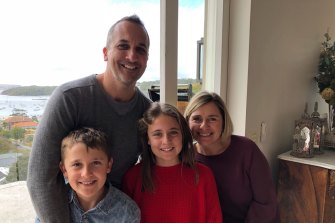 Andrew Abdo with his wife Anna and children Anthony and Megan.

The ructions of such a move left Abdo a little adrift. He had no obvious points of reference. No community. He had played rugby union in South Africa at school but had had no real connections with football since. In June of 2012, he attended his first game of rugby league, sitting on the halfway-line mark, between two sets of opposing Bulldogs and Rabbitohs fans, mesmerised. The speed, continuity and intensity of the game grabbed his attention. The passion of the fans spoke of a sense of belonging.

“There were drummers beating away, songs being sung, the banter was great fun,” he says.

“It was everything you’d expect from a live sporting game, the cheers and boos and the highs and the lows. It was an experience. I got a real sense of how tribal rugby league is from that first experience and I fell in love with the game.”

Shortly afterwards Abdo, who had become a Manly supporter through living on the north shore, got an opportunity through Deloitte to do some consultancy work for the NRL administration, which runs the pre-eminent rugby league club competition in Australia and New Zealand, on the strategy for growing commercial revenue.

For Abdo, the youngest son in a Lebanese Maronite family, the byzantine world of rugby league sports administration with its roiling highs and lows, where every stakeholder possesses an emotionally invested viewpoint, was fascinating. His new job had a pulse. 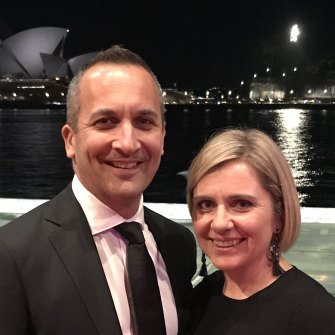 “In the pandemic we’ve been dealing with unprecedented challenges and dealing with them in real time,” he says. “This year, we found out on a Saturday morning in August that the Queensland government had made the decision that we weren’t able to play because of a COVID lockdown and unable complete the round. There was no sport allowed anywhere in Queensland.

“We had to move really quickly, and in the off-season we prepared for a number of different scenarios but of course this was real-time decision making. That afternoon, you know, we had teams in the air on flights, when that decision was made. And so the ability for us to rally together and come up with a solution in literally 12 hours during the night about how to get an exemption, work out what we had to do to get the guys back on the field in that environment safely, that was one of those great experiences.

“The games were shifted from Saturday to Monday through the exemptions, which had a huge impact on the season.”

The chief executive believes that keeping the football going during the pandemic and broadcasting games into homes in lockdown has shown that the code cares about its fans, players and sponsors. The games watched on televisions in living rooms, on computer monitors or mobile phones during lockdown offered everyone a respite. .

However, Abdo believes that once the restrictions relax that the game will need to compete harder to re-engage with fans and sponsors whose commitment of time and money to the game has been cut off over the past two years.

He wants to remind them of the visceral need for tribal gatherings again, particularly in suburban showdowns beloved by rugby league fans. Of course, it will be driven by the online world that was amplified during COVID, but the blood will be pumping again, he hopes.

The past two years have been about survival. Now it’s time to rebuild community, he says. 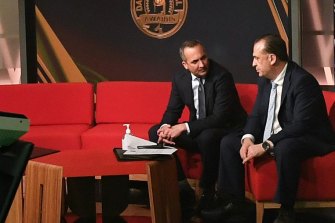 “There is something my family love about living in Australia, and it’s sometimes not as obvious to people that have always lived here, but there is a deep sense of community that exists in Australia,” he says.

“It’s your area, your school but also much broader than that. My family have been amazed by the sense of community after what Australia has gone through with the bushfires, droughts and COVID. And rugby league is part of those communities. It’s amazing.”

Before we part, I ask for his favourite Peter V’landys story? Abdo summons a genuine laugh.

“It’s more of a book, really,” he says. “There are too many to choose from, but let me tell you if you’re going to go to war you want to be next to Peter V’landys. I have seen during the pandemic that Peter is absolutely prepared to get in the trenches with us, make the tough phone calls, pull in the favours when we need to make things happen.

“He has a great instinct. Leadership can be lonely. You can get all the data and reports you like, but sometimes you have to go on gut instinct. ”

The recollection leaves the NRL chief executive buoyant. Andrew Abdo is ready to take the field.