‘We talked about my funeral’: Foodie, 28, who had a life-changing DOUBLE lung transplant to tackle cystic fibrosis reveals how adjusting to life without rare steak inspired her cook-book

A little over a year ago, Pippa Kent’s parents were making plans for their 28-year-old daughter’s funeral. Her sister was travelling, but she was asked to come home early because it might be the last time she could see her.

Self-proclaimed obsessed foodie Pippa, who lives in London, was born with cystic fibrosis (CF), but had been able to live a relatively normal life until the age of 27.

One year on, Pippa has two new lungs and is on the road to full recovery. But one thing she misses is her favourite meal of rare steak.

Those with suppressed immune systems, people who have had transplants or those undergoing chemotherapy can only eat certain foods that don’t carry a risk of food poisoning, much like a pregnant woman.

Now Pippa is raising money for a cookbook, called What Can I Eat?, catering for people like her who have to avoid risky foods to prove those with suppressed immune systems can still enjoy mealtimes. 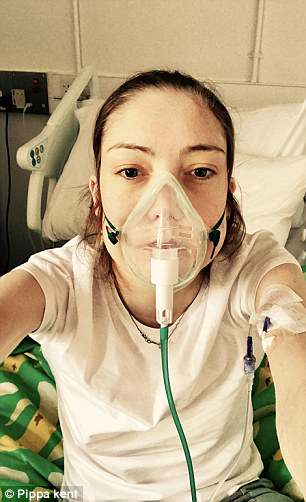 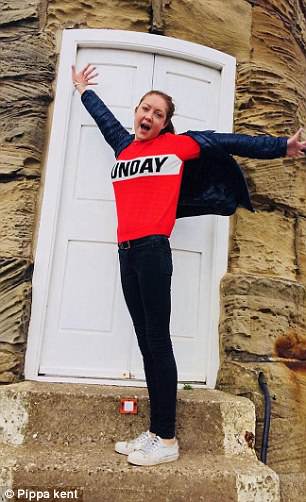 Pippa Kent (left just before her transplant, and right after) lived a fairly normal life with cystic fibrosis until she was 27 when she became ill with chest infections

‘One of the issues with CF is it affects your pancreas so you take tablets to help digest,’ Pippa, who lives with her long-term partner, said.

‘But it means that you can eat anything [because you have trouble keeping weight on]. I would eat as much as the boys would eat and have three more meals a day.

‘I’d eat all the chocolates and snacks I wanted and stay a size 8. It wasn’t good because it was a health issue but jokingly people would almost be jealous.’

She added: ‘But post surgery, I could no longer go and look at a cookbook, pick something and cook from it without wondering if I had to eliminate steps to make it okay for me.’ 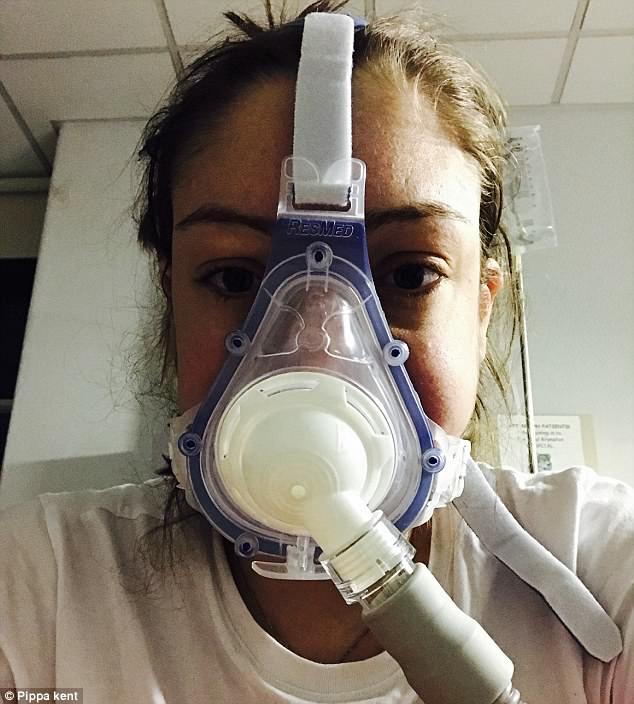 Just before she had her transplant, Pippa had to wear breathing apparatus just so she could take a breath 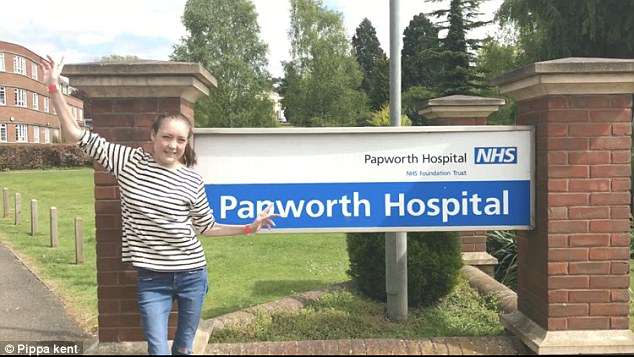 What is cystic fibrosis?

Cystic fibrosis is a genetic disease that causes persistent infections in the lungs and limits one’s ability to breathe over time.

A defective gene causes a thick, sticky buildup of mucus in the lungs, clogging airways and trapping bacteria that leads to infections, lung damage and eventual respiratory failure.

Mucus buildup also occurs in the pancreas, preventing the release of digestive enzymes that allow the body to break down food and absorb vital nutrients.

CF is typically diagnosed in infancy and has a life expectancy rate of 37 years old.

There are approximately 30,000 cases of CF in the US, with roughly 1,000 new cases diagnosed each year.

Now she is advised not to eat risky foods such as blue cheese, runny eggs, rare meat, any unpasteurised dairy and no pre-packaged deli foods such as sandwiches from a coffee shop.

It’s a similar list to the foods that pregnant women are advised not to eat and it’s because a bad bout of food poisoning could affect her double lung transplant.

Although there’s a list of foods she can’t eat, Pippa wants to show those in a similar position to her, as well as the loved ones of those who have to avoid risky foods, that there are plenty of ingredients they can eat.

She said: ‘I cook at home more because it means more control.

‘I invite people around [my house] lots more than going out.

‘As well as elimination, I have to wash all fruit and veg even if cooking with them. 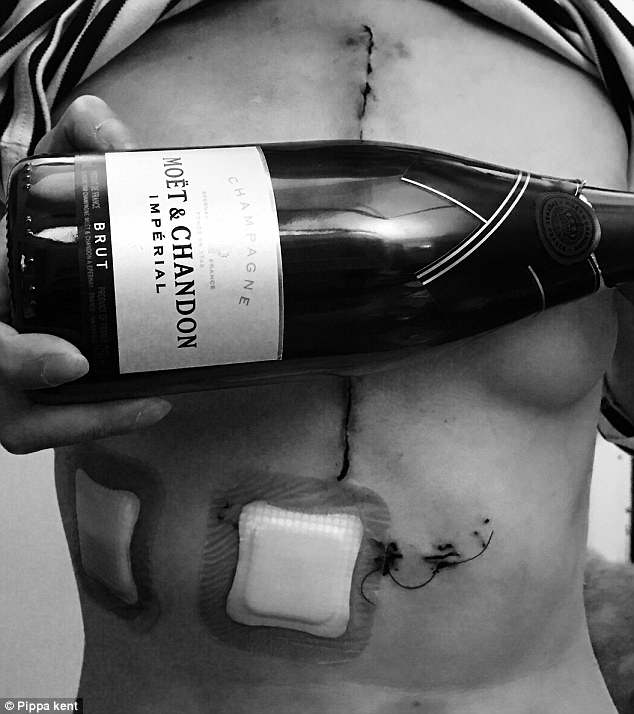 ‘It can be daunting and that’s why I want to do the cookbook so it’s less daunting and it’s easier for people.

‘I wanted inspiration and someone to say to me “it’s fine you have to be careful but you can still eat whatever”. I looked on the Internet and there was nothing which is how the cookbook was born.’

You are born with incurable cystic fibrosis, and Pippa was diagnosed when she was two.

However she said she was relatively healthy for much of her life, controlling the condition with medication and a few hospital trips a year.

She lived independently, went on holiday with friends, and had a job in PR. At times, she was so well that her employers didn’t even know she had CF.

But when she was 27, her lungs started to decline and her regular antibotics stopped working as effectively so she started the process of getting on the waiting list for a double lung transplant, which can take three years or more. 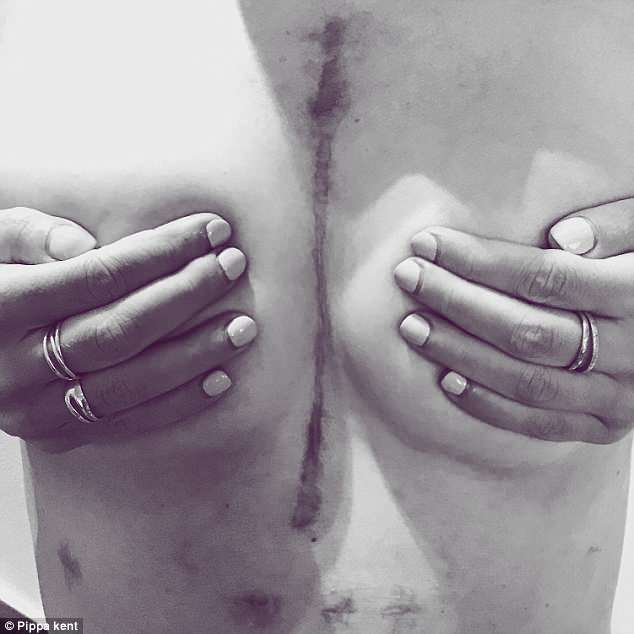 But while she was being considered, her health started to deteriorate massively and she became severely ill with chest infections.

She was in hospital for the best part of five months and was too ill for a transplant. At one point, her doctors told her parents to prepare themselves for the worst. 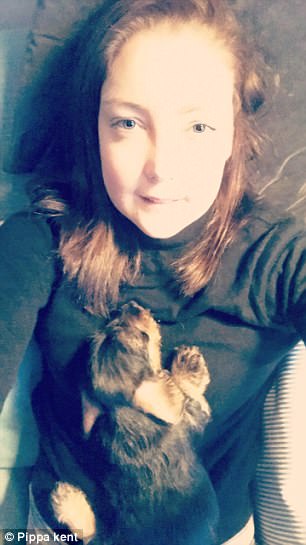 Pippa with her dog after her transplant

‘My sister was travelling in India and was asked to come home. I was on every breathing apparatus and they were trying all sorts of antibiotics but they weren’t sure would get me well enough to be considered for a transplant.’

She added: ‘They were running out of options. We had serious talks about funerals and horrible things like that.

‘It was really scary. What was horrible is that it is completely out of your control and there was nothing anyone could do to improve my health anymore. I just had to wait for that call [for a transplant].’

Thankfully, Pippa became well enough to go on the waiting list for a transplant, and found a match just five days later in April 2017.

But her recovery was far from smooth as she contracted post-transplant lymphoproliferative disorder which led to lymphoma, a type of cancer. She also suffered from a partially collapsed lung. 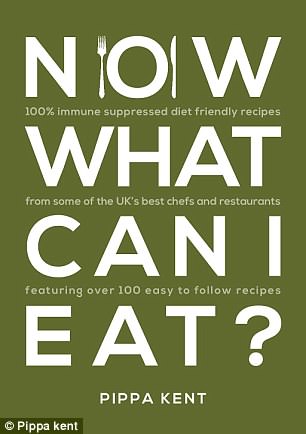 Pippa hopes to release her book if she raises £58,000 to acquire recipes from chefs and publish it

Now she’s had the all clear from cancer and is recovering well enough to consider going back to work in the near future.

But first she wants to raise enough money for her cookbook, which will feature recipes from chefs and nutritionists that are designed for people with a suppressed immune system.

She still misses her former favourite foods of rare steak and sushi – raw fish is a no-no – but she has found meals she loves that she can still eat.

For her, it’s not worth the risk of eating the foods that doctors say are best avoided by those who have had a transplant.

She said: ‘I’ve been given second chance. With some creativity and exploring, you can live within the limitations and still really enjoy food.

‘I didn’t want to have to limit myself to boring things. There are some foods I now don’t eat but I can still enjoy food and cook creatively without breaking the rules.

‘I couldn’t live with myself and I’d be really angry if I just ate a rare steak and then got ill.’

Pippa is raising £58,000 for her cookbook on Kickstarter, where you can donate.