Australia's top Olympic doctor has warned the next fortnight will be "the real test" in bringing the threat coronavirus poses to the Tokyo Games under control as the team begins drawing up contingency plans for training in "safe" areas.

In his first interview since the coronavirus outbreak began in December, the Australian team's medical director, David Hughes, said human-to-human transmission of the flu-like disease in Japan was a "far from ideal" situation. 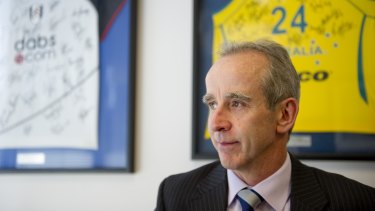 David Hughes said coronavirus was a “significant challenge that we would rather not have”.Credit:SMH

But while coronavirus was a "significant challenge that we would rather not have", Dr Hughes said, the team was proceeding on the basis the Games would go ahead as planned.

"All sports now will be looking at pre-Tokyo preparation and ensuring that they do their training in a place that doesn't have active transmission for the coronavirus," he said. "That in itself could become more difficult. We are seeing local transmission starting to occur in quite a few places."

The virus has now killed 2469 people and infected 78,985. Up to 23,400 have recovered. Mainland China accounts for more than 76,000 of all cases. Its neighbour, South Korea, has the second-highest levels of infection, with more than 600 cases.

Japan, which is due to host the Games in July, has reported 147 infections after a Tokyo party boat took on passengers from the Chinese city of Wuhan at the centre of the outbreak, and the virus spread among employees and revellers. These infections are on top of more than 600 cases on the Diamond Princess cruise ship anchored off Yokohama. South Korea and China are by far Japan's highest source of tourists, accounting for more than 14 million of the 40 million expected this year.

"What is going on in Japan now is a key issue," said Dr Hughes, who is also the chief medical officer at the Australian Institute of Sport. "The next couple of weeks is going to be the real test in seeing whether this local transmission can be brought under control.

"It's a far from ideal situation when we are preparing for an Olympics. All I can say is we certainly would prefer that there wasn't local transmission occurring in Japan."

Dr Hughes said any change to current plans for the Olympics would be up to the International Olympic Committee.

"We will not have a vaccine for coronavirus before the Olympics," he told The Sydney Morning Herald and The Age. "We would need to be sure that it is safe to take athletes into Japan."

Dr Hughes said the coronavirus was a different challenge to the Zika virus outbreak in the lead-up to the Rio Games in 2016 because it is transmitted between humans, not mosquitoes.

"Having a lot of people together in a transmission zone is not ideal," he said. "We don't know what the transmission rates are going to be like in July. I am concerned about the coronavirus. We are certainly not complacent. It is a significant challenge that we would rather not have."

Outside China, Japan and South Korea, the spread of coronavirus to Italy and Iran has prompted health authorities to warn the chances of a pandemic are "very high", rattling global investors and throwing events into chaos after a tumultuous past month.

The 100,000-delegate Mobile World Congress in Barcelona scheduled for February has been cancelled. The Shanghai Fashion week at the end of March was postponed along with the Beijing Auto-Show. Chanel has delayed its May catwalk and Armani revealed its Milan collection in an empty theatre on Monday.

Global stock markets took another battering on Tuesday, wiping more than $1.5 trillion off shares in the US, Europe and Asia. The Australian stock exchange dropped 2.35 per cent at the opening on Tuesday, shedding $47.3 billion in early trade after losing almost $50 billion on Monday.

‘I don’t think it will help’: Wife of Winnipeg man killed by distracted driver worries new penalties not enough

10 Best (and Worst) Horror Remakes of the Last 20 Years

When is Harry's Heroes: The Full English on ITV, and what is Harry Redknapp's documentary about?