Nick Kroll is best known for his comedic roles, but for the new film Operation Finale, he takes on a vastly different role. In the 1960s-set movie, the actor stars as Rafi Eitan, who was among the real Israeli agents from the Mossad involved in the ’60s operation to capture Nazi colonel Adolf Eichmann (Ben Kingsley). But to Kroll, the fact that Operation Finale is a period piece doesn’t make its story any less powerful today, considering our current political climate.

“It’s unfortunately as relevant now as it was then to be talking not only about the fact that we still have Nazis, but that there’s still racism, and antisemitism, and xenophobia,” says Kroll, speaking to Bustle while at New York’s Essex House recently. "There are still genocides happening, and there are still families being ripped apart, even in the borders of our own country, as well as in Syria, and Myanmar, and around the world.”

Out on Aug. 29, Operation Finale comes at a time when white supremacists have a disturbing amount of power amidst the Trump administration. It’s only been a year since the white nationalist rally in Charlottesville, where demonstrators carried Nazi flags and participated in anti-Semitic chants. And upon the Charlottesville rally’s anniversary earlier this summer, white nationalists gathered again for a “Unite the Right 2” rally. Even though the event had low attendance, the fact that it occurred at all is still alarming. For Kroll, his new film serves as a reminder to viewers that it’s vital to shed light both on the power and influence of these hate groups, as well as the actions being taken to stop their growth.

“If we don’t remember and talk about these stories, then we’re going to repeat them — and we are repeating them,” explains Kroll. “It’s not enough to talk about them. We have to be active, and while I’m very proud to be a part of acting in a film about this story, we have to go out on the ground now, and do our best to quell the governments and regimes that allow these things to happen.”

Operation Finale effectively reminds viewers of the pain experienced by millions at the hand of Nazis. In one pivotal scene, the ensemble gathers for drinks and the question of who they lost to the Holocaust comes to the forefront. It’s a chilling reminder of the sorrow experienced at the hands of men like Adolf Eichnmann.

“It’s an interesting scene because I’m at the piano, and I’m not in the middle of what becomes a very heated scene,” explains Kroll. “It really gives you a lot of context as to why and how all of these people ended up, because if you were living in 1960 in Israel, you — or just about anyone you know — had lost people in the Holocaust. It was obviously still incredibly close. It’s an incredibly emotional thing, and really informs how you see everybody throughout the rest of the movie deal with what they want done with Eichmann, whether they want justice or vengeance.” 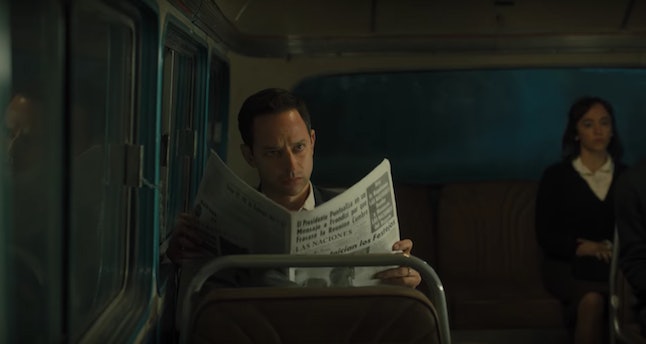 Their reasoning for wanting Eichmann captured and dead is easy to understand within that context. But the film also shows the complexity of this by showing a humanized side to Eichmann. This portrayal isn’t meant to create sympathy for the character, but rather to show that even those who commit the most atrocious acts can be vulnerable, complex beings.

“[Sir Ben Kingsley] really does give this human performance and I think it’s an important wrinkle to the story,” notes Kroll. “These people can do monstrous things, are still human beings who have families, who are mundane, who go to the bathroom, who eat food, and very rarely are pure evil.”

For Kroll, the film’s message boils down to whether it’s best to seek justice or vengeance. Through seeing Eichmann’s humanized side, viewers will question which one to go for. But to Kroll, there’s a clear choice. “It would be as easy and gratifying for [Peter Malkin] to kill Eichmann, when he has the opportunity, versus bringing him back to Israel to stand trial,” explains the actor. “I think it would serve all of us right now, as we face our enemies, to decide whether we want to seek justice, or vengeance. I personally think we should seek justice because seeking vengeance seems to perpetuate the cycle of anger and violence, and hatred.”

Operation Finale reminds viewers that justice is far more powerful than vengeance — even though the latter might often feel like the most desired route.

Kennedy family holds virtual memorial for RFK’s granddaughter and her son, 8, on Zoom after they drowned – The Sun

Love Island's Dani Dyer and Jack Fincham go head-to-head tonight, as she tells him: "I can't be with a liar"

CDC director: If everyone wore a mask this would end in 4-6 weeks