This photograph from inside a reception room of Clarence House offers a look at some of the treasures of the royal collection – and Prince Charles’ favourite photos.

The opulent Lancaster Room, on the first floor of the London residence, is used by Prince Charles, 69, and his wife the Duchess of Cornwall, 70, as a sitting room for private guests.

The room, situated off the entrance hall, boasts large windows and antique bookcases filled with volumes on topics like gardening, art and painting. 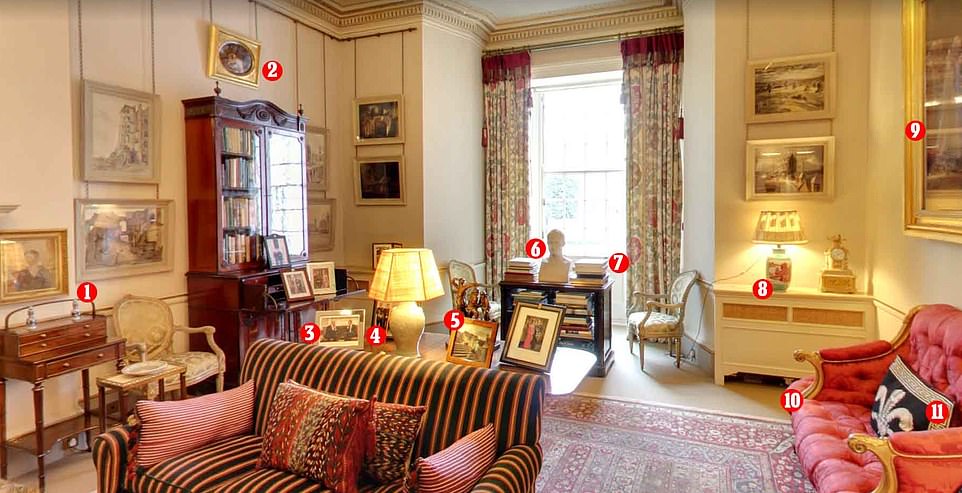 Inside the Lancaster Room. Pictured: 1. Pair of vases, from China 1690 – 1700; 2. Porcelain plaque depicting a tigress Suckling her Cubs, dated before 1818; 3. Photo of Prince Charles and President Obama in the Oval Office, 2011; 4. Photograph of the Queen and Prince Philip with their children; 5. the Queen, photographed by Annie Leibovitz, April 2016; 6. Marble bust of Jerome Bonaparte, King of Westphalia circa 1810; 7. Assorted books on gardening, painting and photography; 8. Vase marking the reign of Qianlong, China, 1736-95; 9. Painting depicting the Anointing of Queen Alexandra at the Coronation of King Edward VII, 1902; 10. English giltwood sofa 1825-50; 11. Pillow featuring the Prince of Wales’ feathers

It is one of a number of rooms featured on a new virtual tour of Clarence House, created and hosted by Google Arts and Culture.

Among the artwork on display in the room is a stunning painting depicting the anointing of Queen Alexandra at the Coronation of her husband King Edward VII in 1902 and a porcelain plaque decorated with an unusual scene of a tigress and her cubs.

Alongside these pieces, which have been passed down through generation of royals, there are nods to Charles and Camilla as the current inhabitants.

A photo of Prince Charles meeting President Obama at the White House Oval Office in 2011 sits pride of place on a side table, next to a second frame portrait of the Queen taken as part of a 2016 magazine photo shoot.

Here, we take a look at some of the room’s highlights… 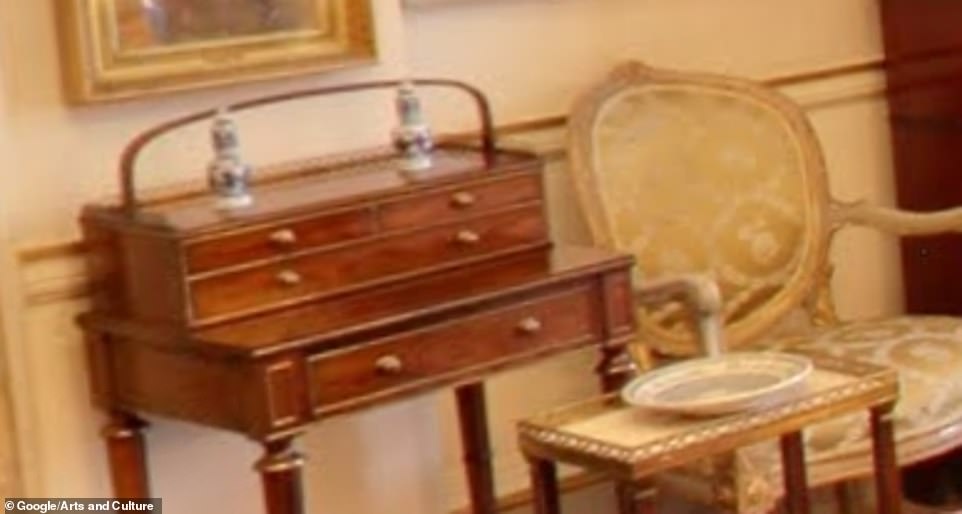 Royal collection: The vases, from China in the late 17th century, are displayed as a set on a desk inside the Lancaster Room

This dainty pair of vases were made in China’s Jiangxi Province in the late 17th century. The blue and white porcelain vases are formed of two tubular sections, the lower six-lobed body raised over a projecting foot and painted with ladies holding, alternately, plants and plant pot. They are displayed as a set on a wood desk.

This Vienna porcelain plaque is decorated with a scene of a tigress suckling three cubs outside a rocky cavern. It is the work of Josef Nigg and is one of four paintings that were given to George IV when Prince Regent by Francis II, Emperor of Austria, in 1818. Here it is displayed above a bookcase in a gold oval frame.

Sitting pride of place on a side table is this framed photograph documenting Prince Charles’ trip to Washington D.C. in May 2011. The image, taken a few days before the wedding of the Duke and Duchess of Cambridge, shows Charles meeting with then President Obama in the White House Oval Office. The image is striking for how relaxed the pair look, with both men smiling easily for the camera. 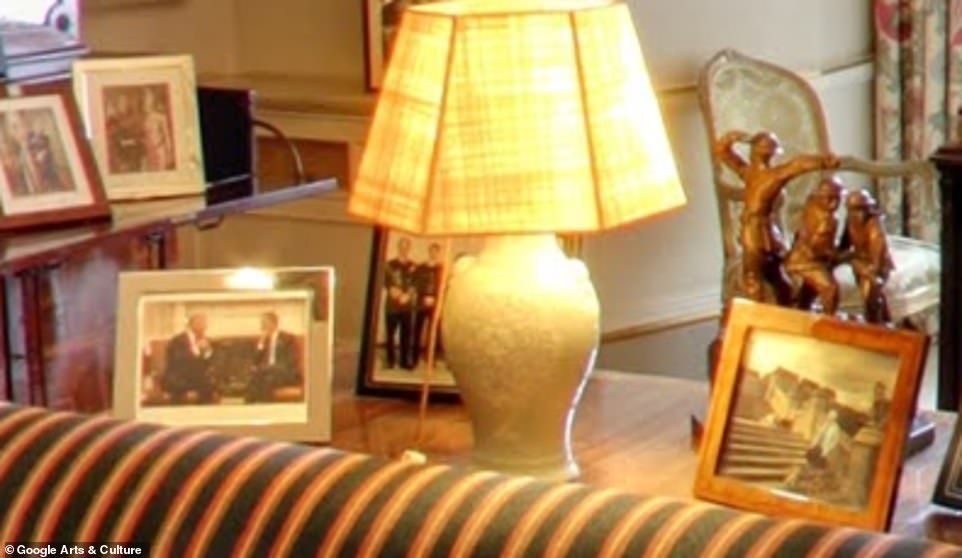 Favourite snaps: A photo of Prince Charles and President Obama at the Oval Office in April 2011, left, and one of the Queen taken by Annie Leibovitz at Windsor Castle in 2016, right, are on display. Just seen behind lamp: A third framed photo showing the Queen and Prince Philip with their four children: Prince Charles, Princess Anne, Prince Andrew and Prince Edward

4. Photograph of the Queen and Prince Philip with their children

This undated photograph shows the Queen and the Duke of Edinburgh with their four children, Prince Charles, Princess Anne, Prince Andrew and Prince Edward. The rarely seen photo is notable for the fact that all four children are dressed in military uniform. The date of the picture is unknown.

The Queen, 92, was captured by celebrated photographer Annie Leibovitz for a Vanity Fair cover story in April 2016. Among the standout images is this one of Her Majesty on the steps of the East Terrace at Windsor Castle with her corgi Willow. Clearly her son Charles thought so too as he had the image printed and framed to be displayed for visitors in the Lancaster Room.

6. Jerome Bonaparte, King of Westphalia circa 1810

Proudly on display in front of the window is a white Carrara marble bust of Jerome Bonaparte, the then King of Westphalia, northwestern Germany. He is shown in the antique style, wearing fashionable short curly hair and sideburns. Jerome Bonaparte, Napoleon I’s youngest brother, had been named King of Westphalia in 1807 following his marriage with Princess Catherine, daughter of the King of Wurttemberg. 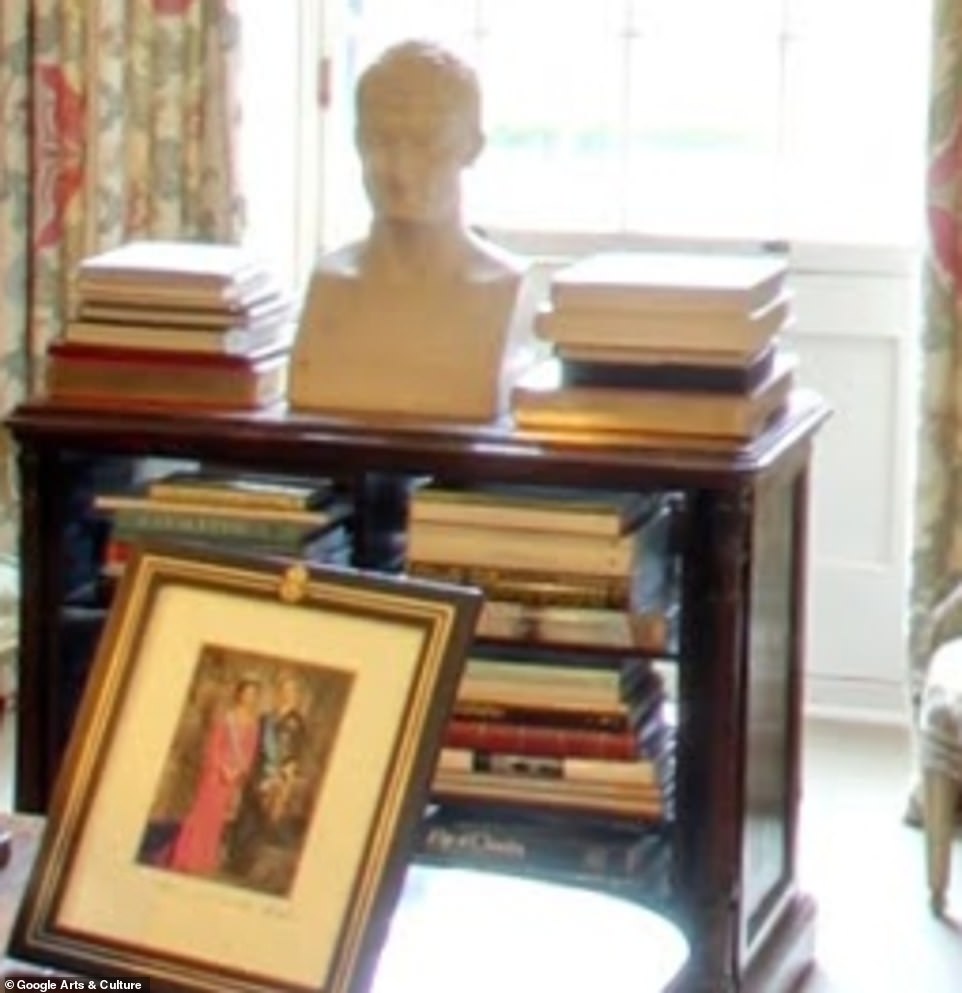 Personal passions: The shelves at the back are piled high with books on a range of topics, including classical art, photography and gardening. On top of the display case sits a marble bust of Jerome Bonaparte, King of Westphalia circa 1810

The table is stacked high with hardback books on a range of topics, including classical art, photography and gardening. Among the titles is a tome celebrating the work of Italian artist Canaletto and another on what appears  to be photographer Lord Snowdon, the first husband of his aunt Princess Margaret.

Part of a pair of Chinese porcelain vases with green glaze, painted in famille rose enamels and gilt. Each slender ovoid, the shoulder tapering to a broad-waisted neck and spreading lip. Almost certainly acquired by George IV. Sent to Buckingham Palace in March 1847; then forwarded to Windsor before making their way to Clarence House.

9. Painting depicting the Anointing of Queen Alexandra at the Coronation of King Edward VII, 1902 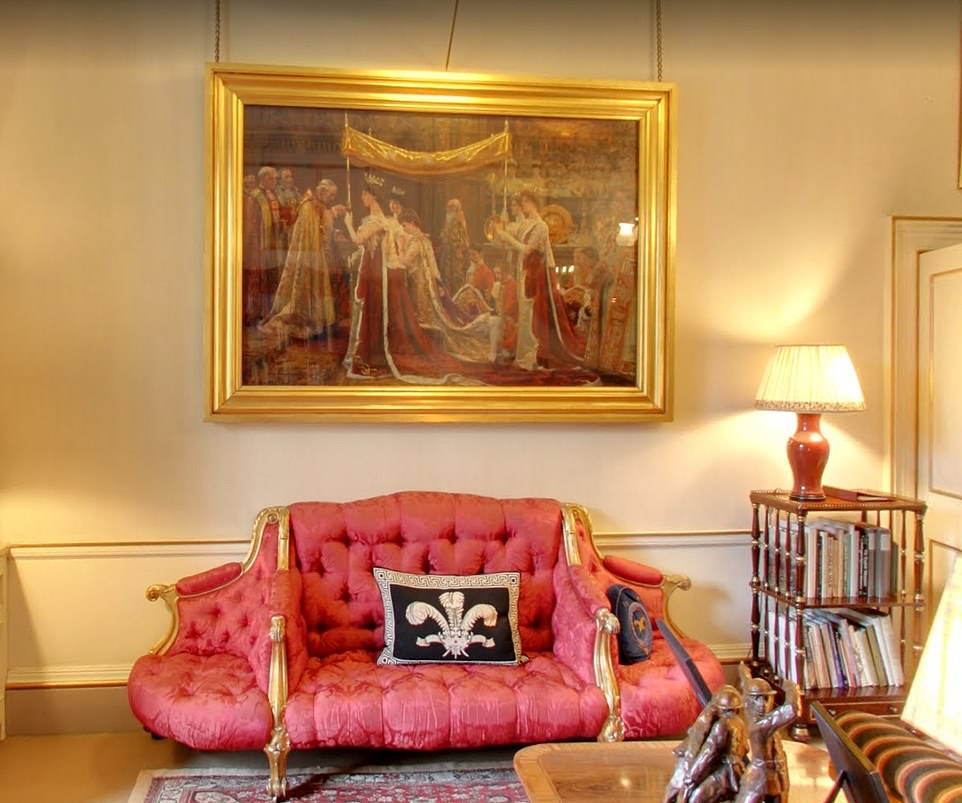 Royal history: Seen from a different angle, the painting of the Anointing of Queen Alexandra at the Coronation of King Edward VII, 1902. It hangs above and English giltwood sofa, dated 1825-1850 and a pillow featuring the Prince of Wales’ feathers

The painting by Lauritis Regner Tuxen represents Queen Alexandra kneeling under a canopy held by the Duchesses of Portland, Marlborough, Montrose and Sutherland, about to be anointed by the Archbishop of York. Tuxen painted two other pictures of the Coronation and records that the pictures were finished in Copenhagen in first half of 1904; he then travelled to London to deliver them.

This English giltwood sofa features a shaped back and corner divisions, upholstered in deeply buttoned crimson silk, with scrolled supports and legs.

The Prince of Wales’s feathers is the heraldic badge of the Prince of Wales. It consists of three white ostrich feathers emerging from a gold coronet. A ribbon below the coronet bears the motto Ich dien, German for ‘I serve’.

The Gameshow Serial Killer: Police Tapes is praised as a "gripping" examination of John Cooper case