Tofu gives you wings! Pilot who fuels his 4am shifts with plant-based plane food is crowned the UK’s hottest vegan alongside an animal rights blogger

An impressive combination of good looks, charm and compassion for animals has secured a pilot and a support worker the title of UK’s Hottest Vegans for 2018.

Announcing the winners of its annual contest, the animal right charity PETA has revealed that Ciarán O’Shea, 22, and Cath Kendall, 29, have received the top honour based on a public vote and impressing the judges with their activism.

Ciarán from Cheshire tries to use his job to promote a vegan lifestyle and encourages his airline to make more plant-based options available, while Cath from the West Midlands writes about cruelty-free living.

Cath from the West Midlands, who has been vegan for five years, told Femail: ‘I blog about everything, including fashion, food and lifestyle, because it shows people that just because you are vegan you don’t have to miss out on anything at all.

‘Occasionally, I get unkind comments but I think that’s the case with anyone who is active within a social justice movement. Most people are really lovely and see that we are only trying to build a kinder, healthier world. 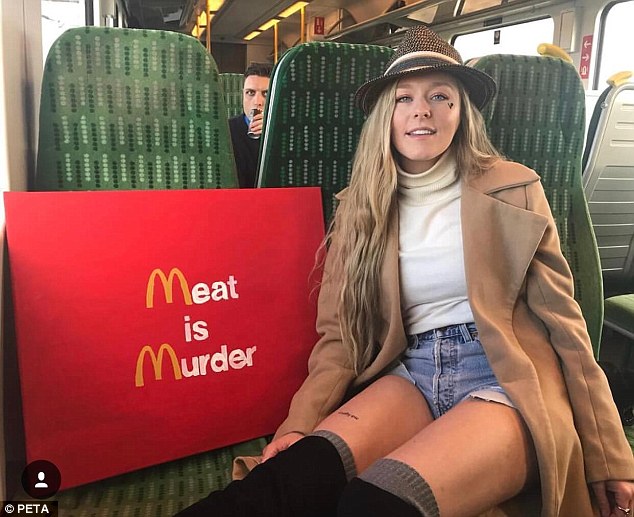 Cath Kendall, 29, from the West Midlands on her way to an animal rights protest. She’s been crowned the UK’s hottest female vegan by PETA thanks to her good looks and passion for activism 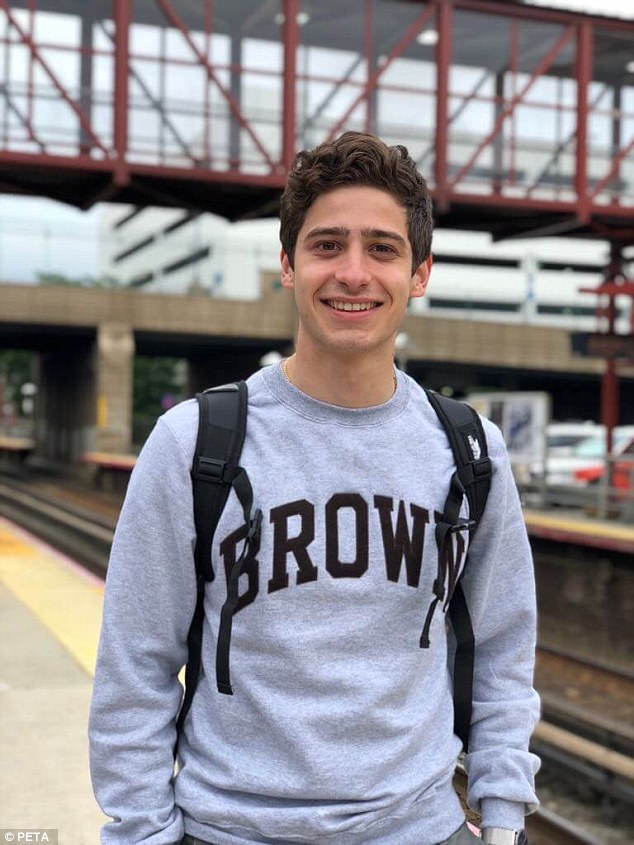 Pilot Ciarán O’Shea, 22, from Cheshire fuels his early starts with scrambled tofu on toast and uses his job as an opportunity to spread the word about the benefits of a vegan diet

Cath had been vegetarian for 15 years before switching to a totally plant-based diet, after learning of the ‘hidden horrors’ of the dairy and egg industries.

‘Cows are forcibly impregnated, babies are taken away from their mothers and the male calves are killed with a bolt gun to the head – all because we enjoy drinking cow’s milk,’ she said.

‘All that unnecessary suffering and pain for a glass of milk or piece of cheese when we can just choose to eat something else.

‘At first, I found cutting out chocolate difficult because there weren’t many vegan chocolate options available five years ago, but I found a couple I liked and I’d stock up on them. Now you can buy amazing vegan chocolate everywhere – Morrison’s orange chocolate bar is amazing. 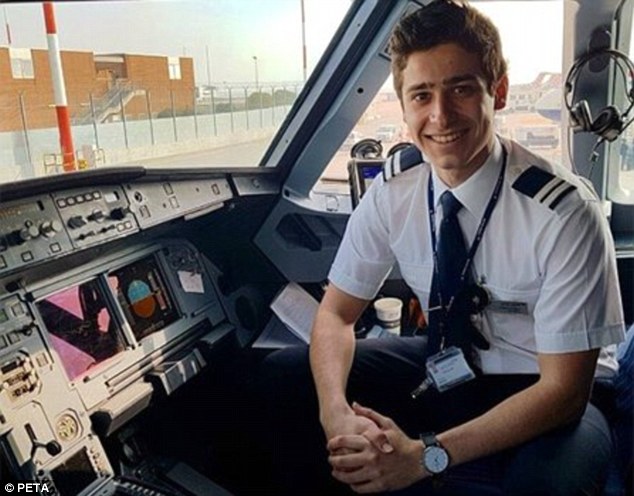 Pilot Ciarán from Cheshire brings security-friendly foods like salads, sandwiches and noodles to work with him and eats vegan versions of his airline’s in-flight meals

‘You can also get vegan cheese in most supermarkets now, and it’s amazing. So it’s just not difficult at all any more.’

Cath hopes being crowned the hottest female vegan in the UK will help her to get the message out there.

It feels great, and I’m really flattered, but my focus really is to just to help animals in any way I can. I’m really thankful that this may give more opportunities.’

Fellow winner Ciarán was also vegetarian for a long period before switching to veganism.

‘To me, it seemed wrong to continue eating animal products when there are so many kind alternatives available – so I stopped,’ he recalled. 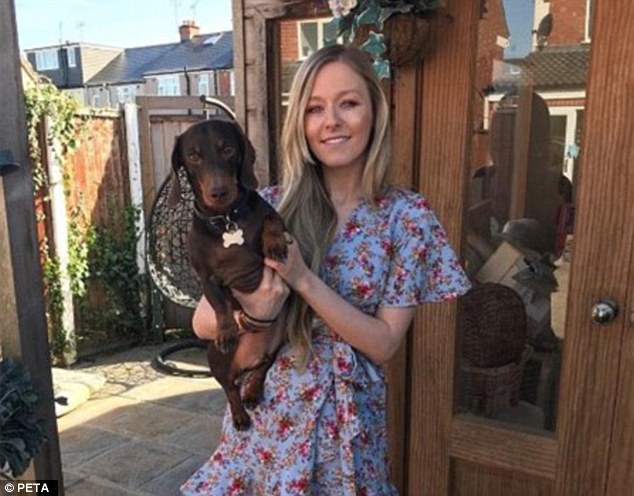 Cath Kendall, 29, from the West Midlands (pictured with her dog Walter) decided to go vegan after learning some hard truths about the diary industry and couldn’t sanction eating milk or eggs any longer 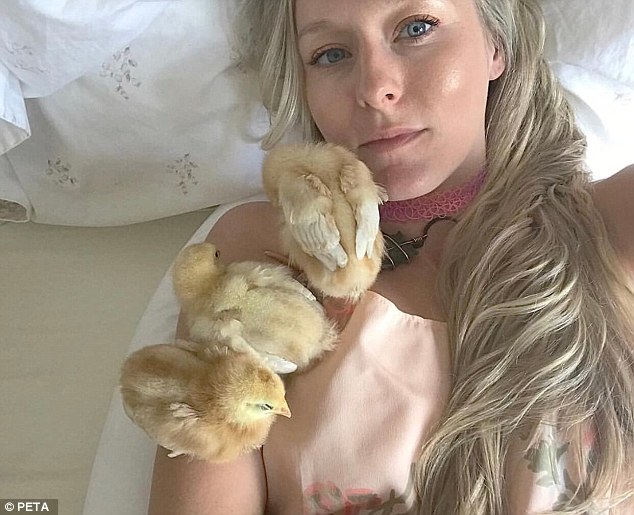 Cath Kendall, 29, from the West Midlands hopes that winning PETA’s contest will allow her to shed more light on the animal rights issues that she’s passionate about

‘It was tough when I went out to restaurants, and I admit to not having always been able to stick to it.

What a vegan pilot eats in a day

‘Pilots have moving schedules, with some shifts starting at 4 am and others at 3 pm, so what and when I eat varies a lot,’ Ciarán said.

‘The airline is great at providing me with special meals, and on an ordinary day, I would get at least one meal provided in flight.

‘I tend to start with breakfast porridge or some form of protein on toast – I love scrambled tofu – around two hours before I report for a flight so that I have energy when I need it.

‘On longer days, I self-cater with security-friendly foods like salads, sandwiches and noodles to keep me going, and we get bags of fruit and nuts when we need them, which are great for keeping me going. In addition, nuts are very protein-heavy, which helps a lot, and the crew meals are largely curry-and-rice-based, so they’re very filling.

‘If I’m hungry when I get home, I’ll cook something for myself, and I drink protein shakes after I work out, but ultimately, I tend to listen to what my body is telling me rather than setting specific times, which could get quite complicated.’

‘It’s a learning curve though, and as time’s gone on, I’ve got better at spotting the items on the menu that can be most easily veganised, so I stick to my morals without making life too hard for the staff.

‘Becoming vegan is an incredibly laudable thing to do, and any change is a positive one. For some people, it is a huge shift, so lapsing here and there should be seen as a learning point rather than a failure.

‘Even cutting out meat for one day of the week is reducing your consumption by 15 per cent.’

Ciarán uses opportunities to spread the message at work when he can, without being too forthright.

‘It comes up in conversation whenever I get a meal. I don’t like to push it, because it’s important to keep a good rapport in the flight deck, but I speak frankly, and usually it’s well received,’ he said.

‘The issue tends to be a lack of knowledge about the truth behind the animal-agriculture industry rather than a lack of will to learn more.’

And he said it’s easy to fit his eating plan around his varied hours with a little advance planning.

Both winners will receive a trip for two on the luxury five-night Christmas Markets cruise on Germany and Switzerland’s Rhine and Moselle rivers, courtesy of Vegan Travel.

Our two winners are living proof that a clear conscience and a compassionate heart are the hidden ingredients of hotness,’ PETA Director Elisa Allen said.

‘PETA encourages everyone inspired by their integrity and vitality to follow their lead and give going vegan a try.’

All eyes on Alphabet's first-ever disclosure of Google Cloud profit

Mick Jagger Shows ‘How To Quarantine’ In ‘Tonight Show’ Video

Tom Hardy says there could be up to three Venom movies