Father attempts to ‘break the taboo’ of breastfeeding with his intimate portraits of mothers nursing their babies in train stations, cafes and at bus stops

An incredible series of intimate photographs celebrating the beauty of breastfeeding in public have been taken by a London-based photographer who hopes to break the taboo surrounding the act.

Nitin Sachania, 40, was inspired by his wife who had just given birth to their second child, upon discovering that mothers in England were less likely to breastfeed in public.

The stunning portraits show the women as they proudly feed their children in busy cafés and restaurants, at bus stops and in train stations across the capital city. 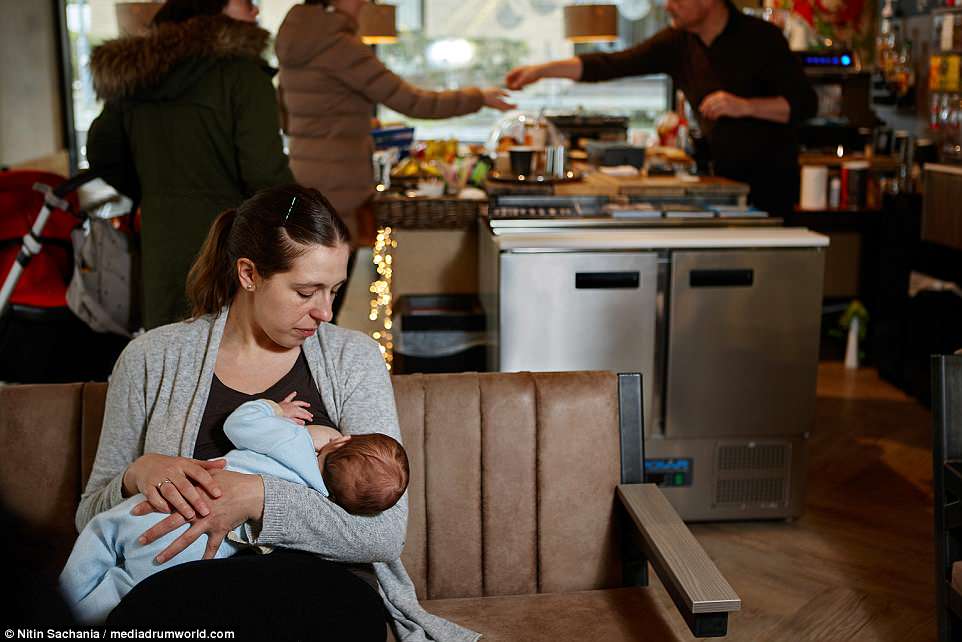 Photographer Nitin Sachania, 40, from London, has took a series of pictures of mothers breastfeeding in public in the capital in the hopes to break the taboo surrounding it (Camila seen breastfeed in a cafe) 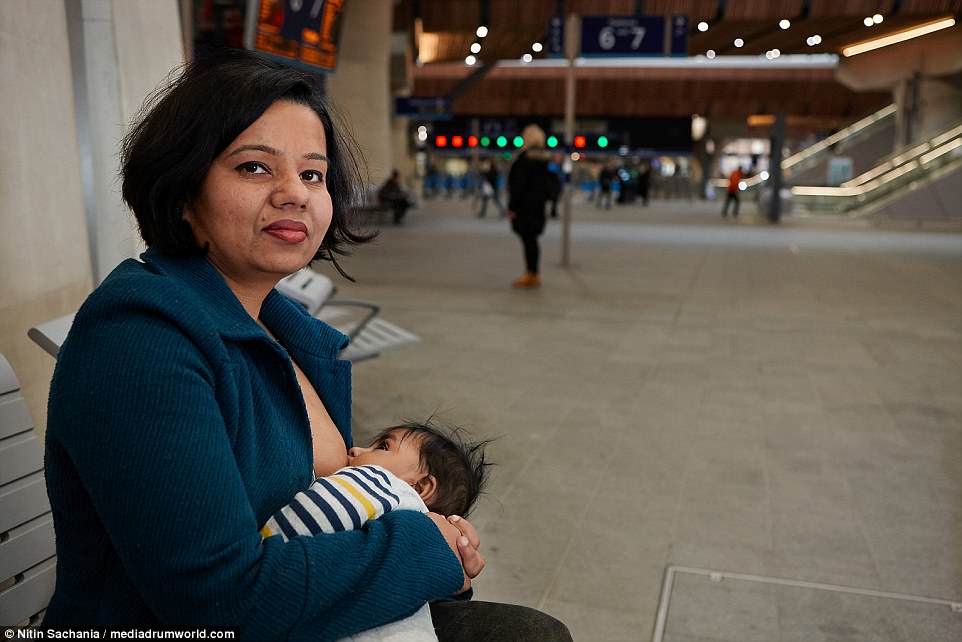 Nitin Sachania, 40, was inspired by his wife who had just given birth to their second child, upon discovering that mothers in England were less likely to breastfeed in public (Vidya seen) 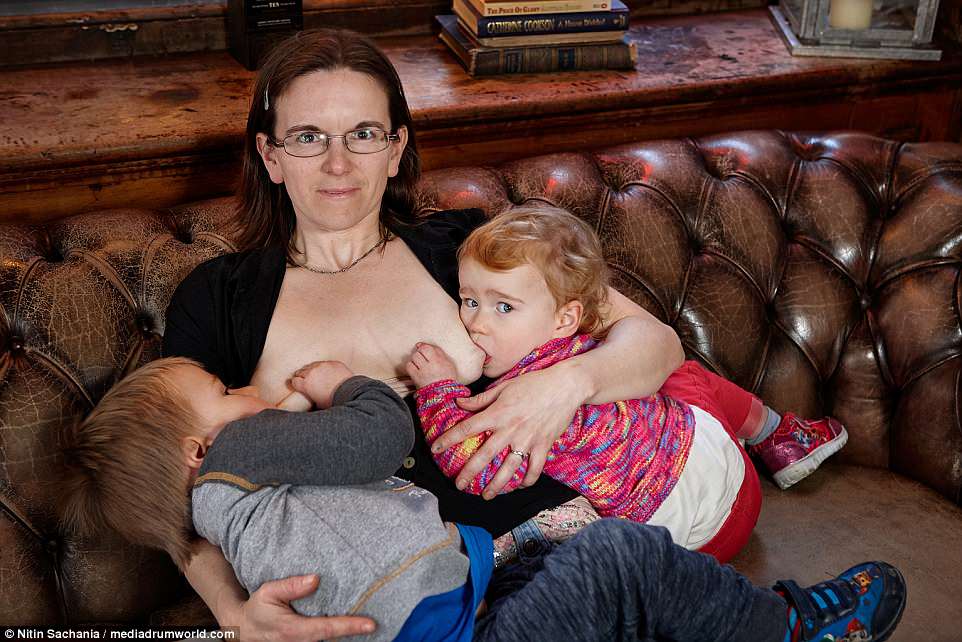 Speaking about his idea, he said: ‘I was thinking of ideas for a personal project I wanted to do and after speaking with my wife, she suggested that breastfeeding in public places could be something I could look into.

‘She had just given birth our second baby and the idea seemed like a good one.

‘After researching a bit more, I came to realise that breastfeeding in this country is at an all time low, especially in public.

‘I thought it would be awesome to photograph these women in a public place and ask them to tell me about their breastfeeding journey. 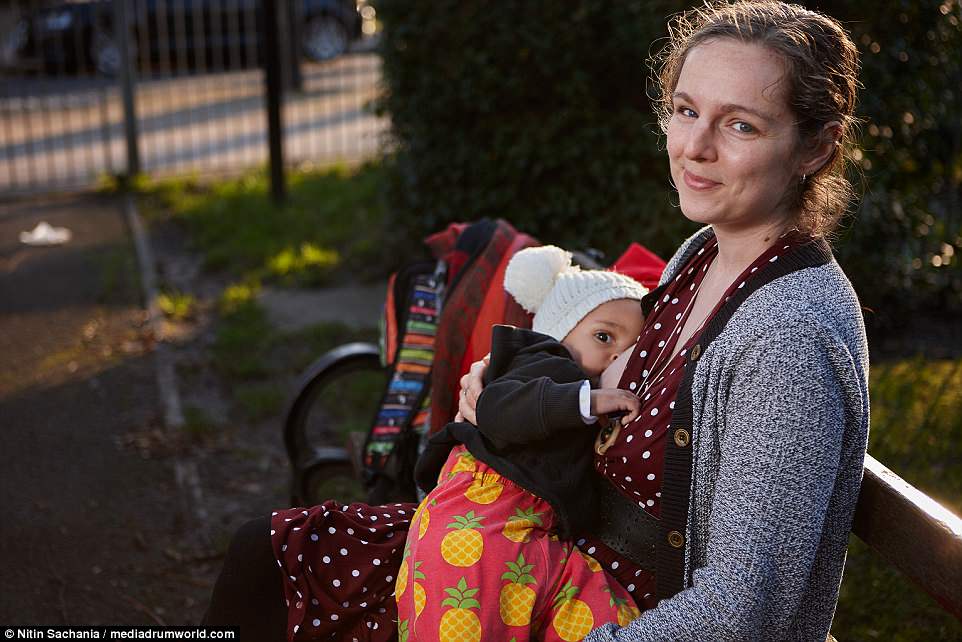 The stunning pictures show the women as they proudly feed their children in busy cafés and restaurants, at bus stops and in train stations across the capital city (Mikayla feeding her little one in the park) 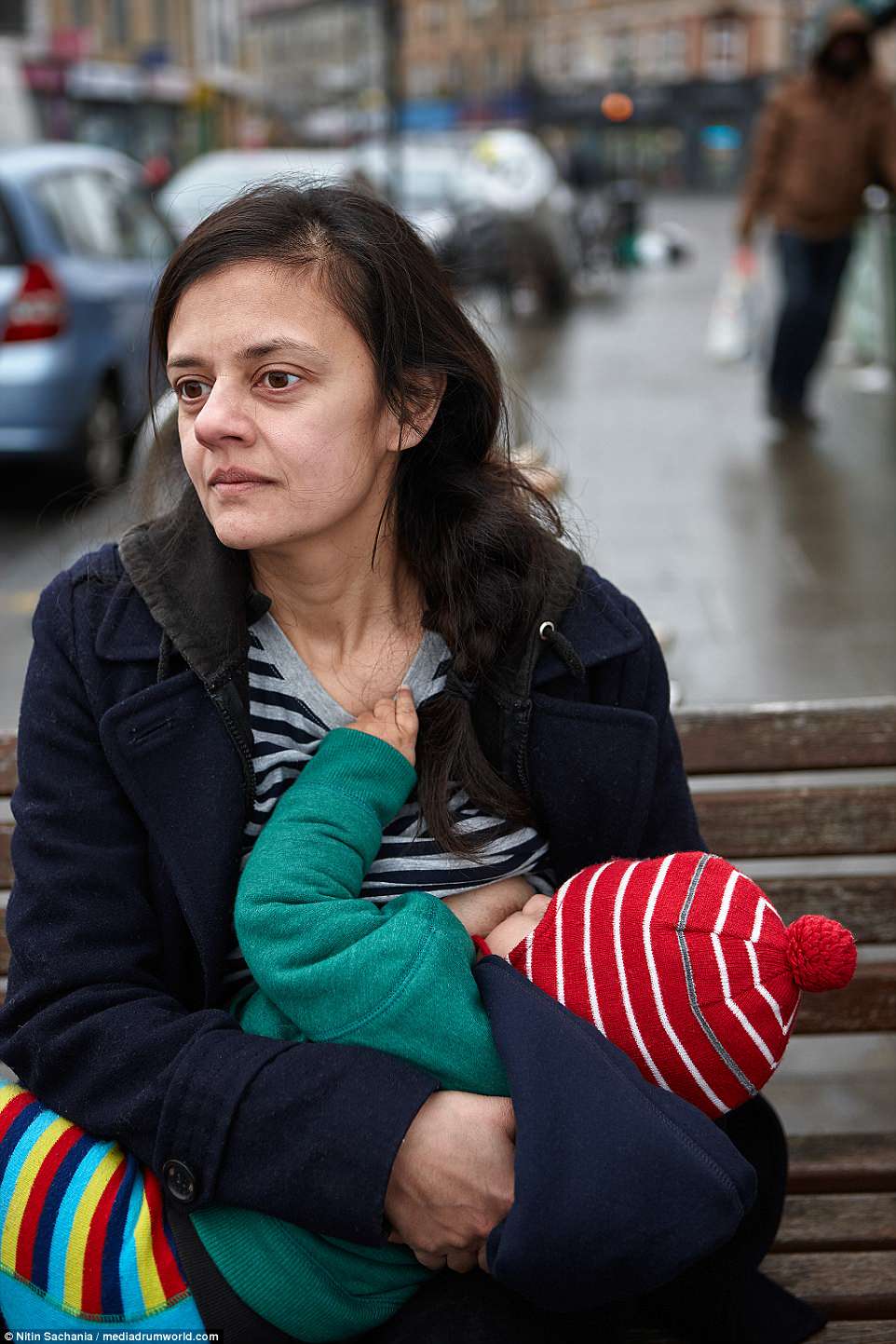 Nitin explained how special it felt to be involved in such a bonding moment for mother and child (Southall, seen feeding her baby on a bench) 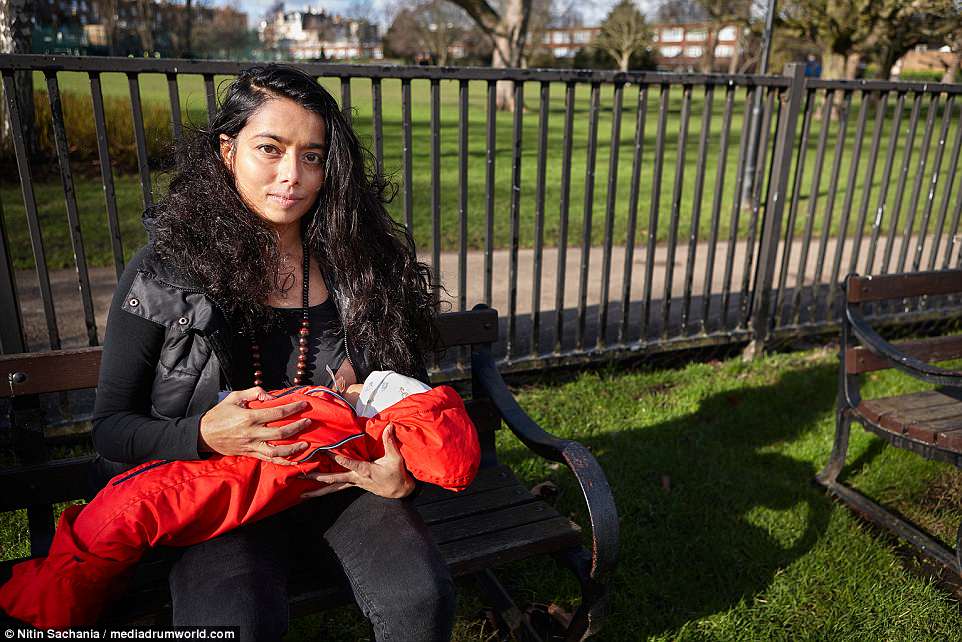 ‘I want to show them and strong women who are standing up for what they believe in and defying what society has set as being ‘not normal’,’ he added.

Nitin was joined by his wife on shoots who would help to put the women at ease and make sure they felt comfortable.

‘Breastfeeding is a beautiful act,’ he said. ‘If a woman wants to breastfeed in a public place, she should be able to do it without feeling uneasy and it is the most natural thing a mother can do.

‘A mother is feeding her child is not out of the ordinary and these women should be shown the utmost respect.’ 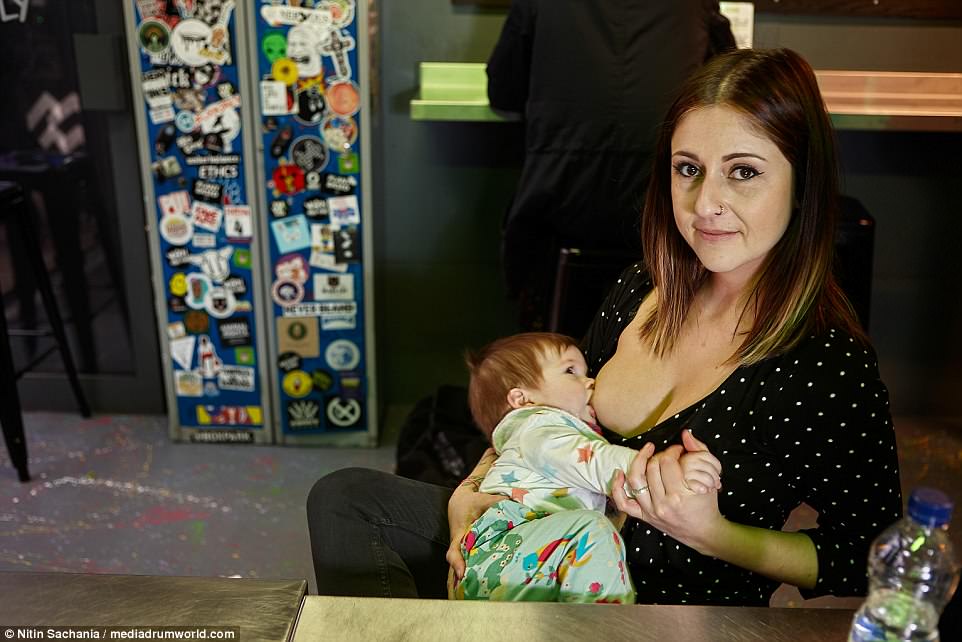 And Nitin admitted he was shocked to learn some mothers experience a backlash when breastfeeding in public.

‘Although it has not happened to my wife or to any of the women while I photographed them, I have read about times where women have been made to feel like they are doing a bad thing, even being told they should not feed in public,’ he added, keen to raise awareness of the issue.

He also explained how it felt to be involved in such a special bonding moment for mother and child and what he loved most about completing the project.

‘It felt amazing. As a father of two myself and having been through all the issues with my wife and helping her try and deal with it, it has made me appreciate what these women go through every day,’ he said.

‘I am in admiration of all these women, because this is something they have to do alone, yes partner can help in some ways, but to have that mind set and determination, it is all down to the mother. 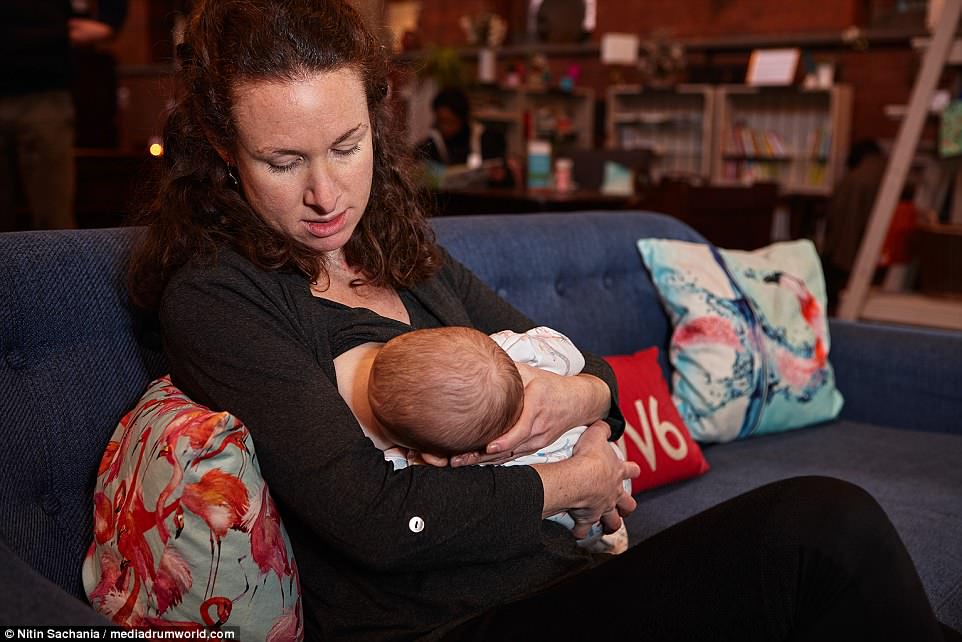 Alyson takes some time out to nurse her little one. The photographer was horrified to learn that some women receive backlash for feeding in public

‘To see the child feeding is such a natural thing, why would anyone think otherwise?’ he argued.

‘I get to interact with likeminded people, be it the mothers, sometimes their partners, who would come along for the shoot and moral support.

‘I would be able to get to know their thoughts and feelings on the subjects and would be pleasantly surprised they have similar ideas to what my wife and I have.’

‘All the women I have photographed are from the London area’, he added.

‘I am trying to photograph women of all race and religion, as I want to show that this should not matter when it comes to the welfare of your child.’ 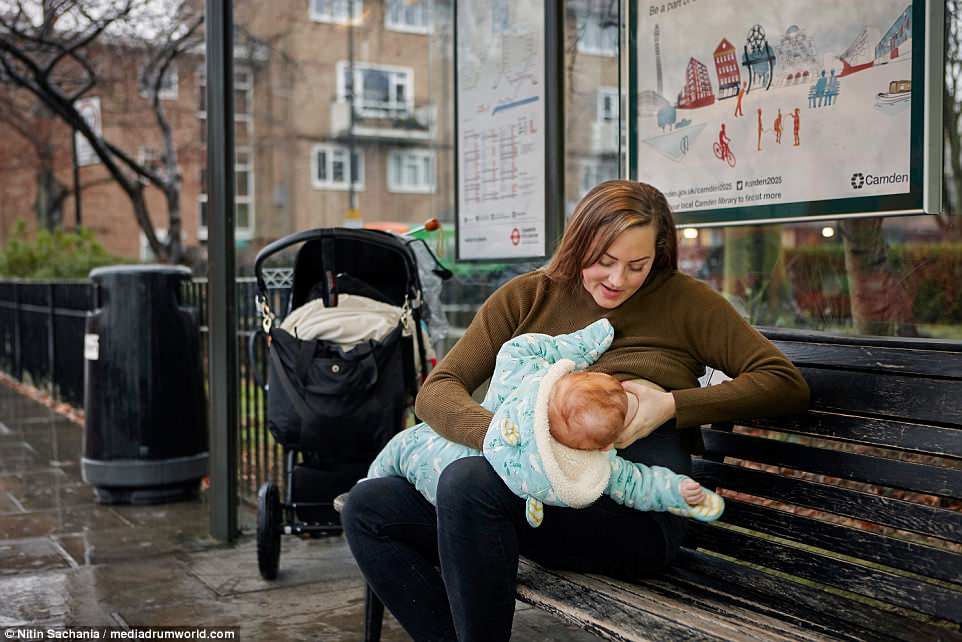 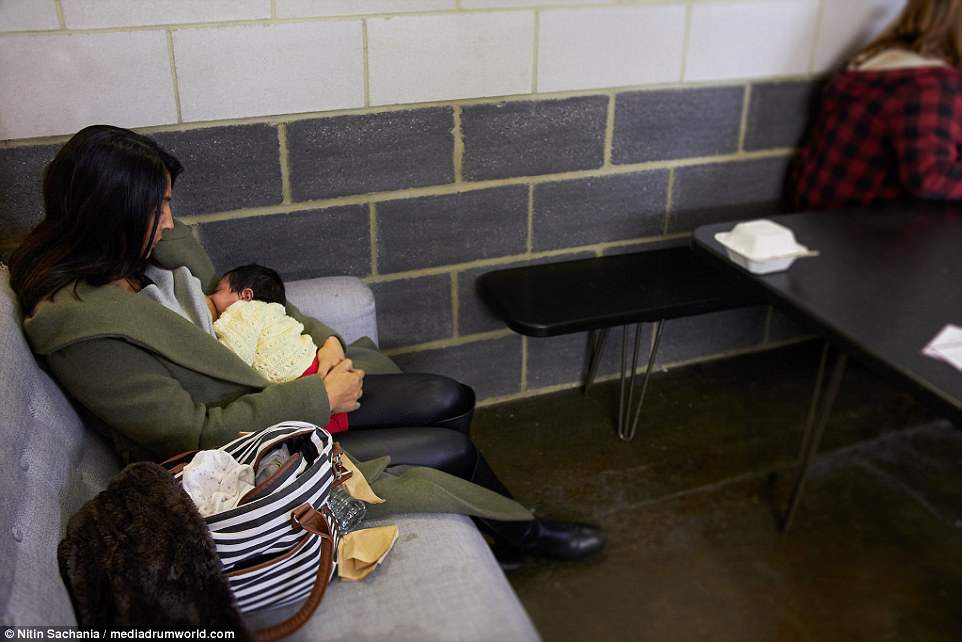 Nitin admitted he was shocked to learn some mothers experience a backlash when breastfeeding in public (Nikita, London, feeds her little one while out and about)