Home » Lifestyle » Picture this: Martha Cooper was way ahead of her time

Martha Cooper is a New York-based photographer who has been recording life and art on the streets of the world's big cities for about 50 years. She was there for the dawn of hip-hop and graffiti art and her pictures of the Bronx tell the story of New York's period of decay and disorder during the 1970s. 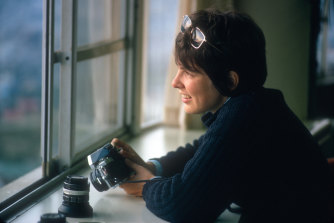 Photojournalist Martha Cooper at home in New York, sometime in the 1970s.

She's also very polite. At an advanced stage in her distinguished career a pompous Manhattan gallery director grudgingly grants her a show and she remains incredibly calm as he explains with po-faced disdain that New York's place as the centre of the world means that he has to reject any photograph that wasn't shot there. Nor does she explode when he flicks aside every image sullied by a smiling face. These are not serious, he says. Art and happiness occupy different realms.

In this thoroughly engaging documentary profile by Australian filmmaker Selina Miles we learn that Cooper acquired such stoicism over decades. When she arrived in New York at the age of 32, she realised a long-standing ambition and went to work at National Geographic only to discover that she and the magazine were not a good match. According to its editors, great photographs are "made, not taken". Cooper, in contrast, relished vitality and spontaneity; shooting what she found on the streets. She was drawn to the ingenuity of the slum kids, who shaped their playthings out of abandoned cars and discarded furniture, and she was charmed by the gardens planted by the immigrant families in Queens and the Bronx – tiny green oases amid expanses of cement grey. 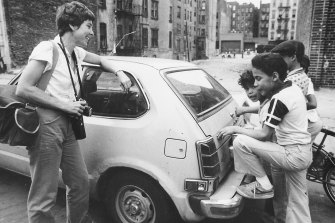 Cooper in action on the streets of Alphabet City, New York, in the 1970s.Credit:Dan Brinzac

She eventually found a home at the city's tabloid, the New York Post, becoming the paper's first female photographer. Like the gallery director, its editors didn't particularly want smiles but they did give her a chance to explore the city's rough edges. They sent her out to look for rioting youth gangs. Instead, she came back with pictures of the first breakdancers.

By 1980 she had won the trust of the young graffiti artists who went down into the subway at night to spray the trains with their elaborate patterns and symbols. In the late '70s she photographed New York graffiti artist Dondi over the two years it took him to complete Children of the Grave, a mural spread across three subway cars. And by 1984 she had enough for the first of the photographic books she's published over the years.

She's now an agile 76 year-old with a white pixie cut and an optimistic look in her eye and she's still taking pictures. She stopped for a while but was prompted to go back to it when she realised how many artists have used her photographs as the basis for works of their own. In so many ways she has been ahead of her time.

Two Missouri hairstylists may have exposed 147 people to coronavirus

‘The Young And The Restless’ Spoilers For Friday: Jack Demands An Explanation!

From Olympics to Comic-Con: How Coronavirus Is Affecting Hollywood