How a piece of STRING can tell you if you’re too fat: The nifty test that instantly indicates if there’s a ‘dangerous bulge’ around your middle

Experts have revealed a way to instantly tell if you are storing too much fat around your middle – using only a piece of string.

Dr Margaret Atwell demonstrates the simple test on the BBC show The Truth About Obesity, explaining how to start by cutting a piece of string to the length of your height.

Next, she said, fold that piece of string in half and wrap it around your middle.

If you’re struggling to make the two ends of the string meet, your visceral fat level is too high.

Too much visceral fat puts you at a higher risk of developing diabetes and heart disease – and can take up to a decade off your life expectancy.

But it’s not just the obviously overweight who are at risk, as even people with a so-called healthy weight can be at risk of health problems. 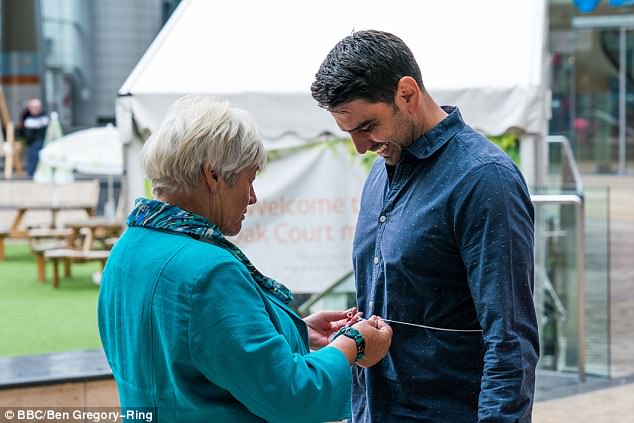 In BBC One’s The Truth About Obesity, experts measure people’s height and waist ratio to predict the levels of visceral fat

Visceral fat is the dangerous fat that wraps around your organs, like your pancreas and liver, raising your risk of major health problems.

HOW TO DO THE STRING TEST

And it’s not just the obviously overweight who are at risk, as people with a healthy body mass index (BMI) can still carry too much visceral fat..

By measuring your height to waist ratio, you can get a good indication of the level of visceral fat you are carrying.

According to Doctor Margaret Ashwell, this is a more accurate way of seeing how healthy you are than calculating your body mass index.

Speaking in the show, she says: ‘BMI doesn’t measure fat distribution. The best way of explaining it is think of a great hunky rugby player, they might have the same BMI as a chubby darts player. 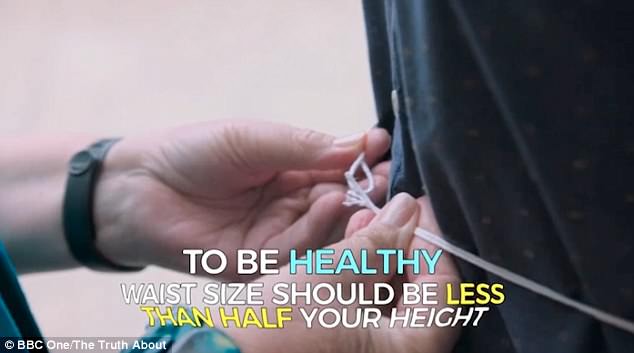 WHAT IS VISCERAL FAT?

Visceral fat is stored in your middle around your organs.

It is meant to ensure that there is some distance between each organ.

It is sometimes referred to as ‘active fat’ because research has shown that this type of fat affects how our hormones function.

Storing higher amounts of visceral fat is associated with a range of health problems, including diabetes, high blood pressure and a raised risk of heart disease.

‘The rugby player might have more muscle than fat, where as a dart player is going to have more fat than muscle.’

In fact people with healthy BMIs can also have high visceral fat levels, as 25% of people with a normal BMI score fail the string test.

The show’s presenter Chris Bavin, 38, tries out the string test on camera, and discovers the he cannot make the ends of the string meet around his middle.

Admitting that he has gained weight as he got older, and is finding it harder to lose, he says it’s ‘a wake-up call’.

Chris called the result a ‘wake up call’.

Dr Ashwell says getting rid of visceral fat is simply a case of exercising and eating well.

Losing just five per cent of body fat will cut the visceral fat down drastically.

The documentary explores why so many people in the UK are obese, and questions whether our eating habits or genetics are to blame.

Of 5,000 people surveyed for the show, it was revealed that those who live near takeaway restaurants are twice as likely to be obese – and there are 58,000 takeaways in England alone. 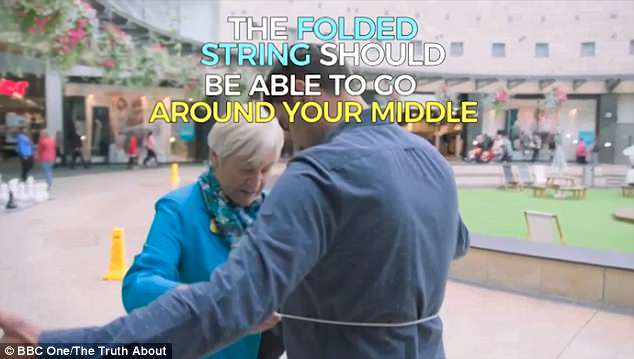 The show’s presenter Chris Bavin, 38, had the string test done and discovered that he cannot get the string around his middle

Takeaways are not good for maintaining a healthy diet and weight, as they typically have 60% more calories than home cooked meal.

But our genes also play a huge part in our weight – even if we have a healthy diet.

Sadaf Farooqi, a professor at the University of Cambridge, says on the show: ‘It is a lottery, we inherit these genes. They either contribute to a higher tendency to gain weight or they may protect your from gaining weight.

‘It’s not really about people’s fault, it’s actually about understanding there is a lottery, we can moderate some things in our environment, but actually understand there is a biological side to this is very important.’

What Would a Modern Day Beth Harmon Wear? Anya Taylor-Joy Shows Us

Everything We Know About Lori Harvey and Michael B. Jordan’s Relationship So Far