PLATELL’S PEOPLE: Why Kate needs a word with Meghan

Today we will witness a remarkable double act on Wimbledon’s Centre Court, as two duchesses watch the women’s final, performing their first public event together without their husbands.

Most of us haven’t a clue whether those sisters-in-law get on or how close they are. But their joint outing today to the royal box presents Kate, the Duchess of Cambridge, with a chance to have a quiet word with newcomer Megs, the Duchess of Sussex, on where she’s going wrong. Because, boy, she needs it.

Kate could start by telling Megs the royals do not, ever, interfere in politics. In the 56 days since her marriage, Meghan has declared herself a humanitarian, proud feminist and, in Ireland this week, a supporter of the liberalisation of abortion laws.

She needs to understand one does not flaunt one’s humanitarian credentials. Modelling yourself on Angelina Jolie may be fine for a soap star but not for a royal. 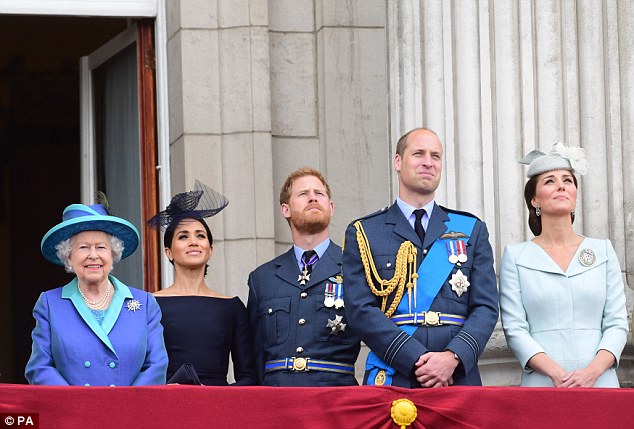 Today we will witness a remarkable double act on Wimbledon’s Centre Court, as Kate and Meghan Markle watch the women’s final, performing their first public event together without their husbands

But such solecisms pale into insignificance compared to the American’s shameless extravagance. During her 24-hour visit to Ireland, the thing that grabbed the headlines was that she changed into four different designer outfits with a total value of £28,000.

The £2,000 worth of shoes she wore on that trip is more than many British families have to live on for a month.

As the Mail reveals today, Megs has clad herself in around £155,000 worth of Givenchy, Dior, Chanel and Prada since her wedding. That’s infinitely more than Kate spent in the entire year after marrying William.

Yes, the former TV actress looks stylish, yes, she is lovely, but she has a lot to learn about this country.

Kate should quietly tell her we don’t like moral posturing and we certainly don’t like ostentatious displays of wealth. Indeed, Megs could do worse than look to Kate for an example of how to do it.

In the early days, Kate endeared herself to us by shopping in the High Street — and she’s still as happy wearing Reiss or Jigsaw as she is couture, even for special occasions. 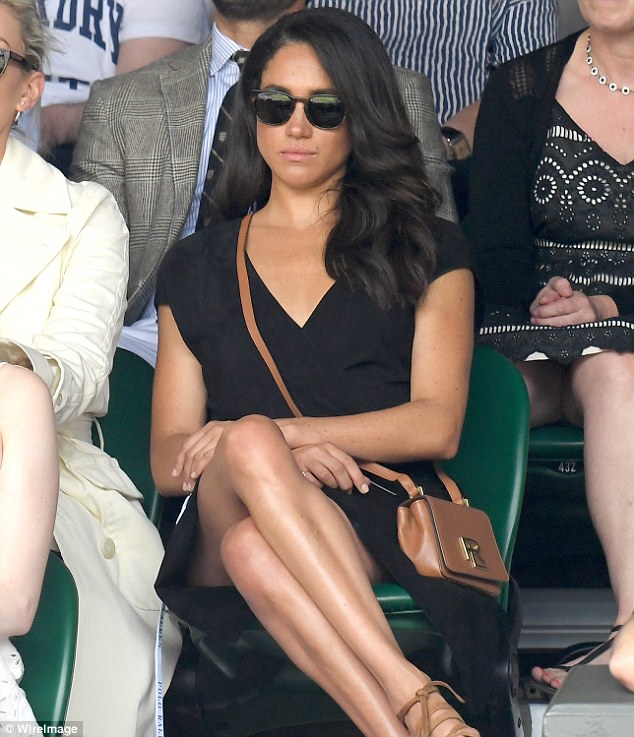 Kate could start by telling Meghan Markle (pictured here at Wimbledon in 2016) the royals do not, ever, interfere in politics

She recycles her clothes, too, just like the Queen and Princess Anne. She wore a four-year-old coat to Meghan’s wedding. But I have yet to see Megs in the same outfit twice.

Meghan needs to understand there’s a lot of respect and affection for how royalty is not just another branch of showbiz, where #MeToo values hold sway and the dress style is red-carpet, off-the-shoulder and always with a coquettish pout for the cameras.

One final piece of advice. Perhaps Meghan should book an appointment with Rigby & Peller, providers of lingerie to the royals — and get herself a proper-fitting bra.

The Tesla co-founder and ingenious entrepreneur Elon Musk says he finds it deeply ‘hurtful’ when people describe him as a billionaire. Most of us would kill to feel such pain.

Father of young twins George Clooney, 57, crashed his scooter and ended up in hospital with trauma injuries to his pelvis, knee and hip. He will take weeks to recover. Sadly, healing the injured vanity of a middle-aged man behaving like a teenager will take much longer. 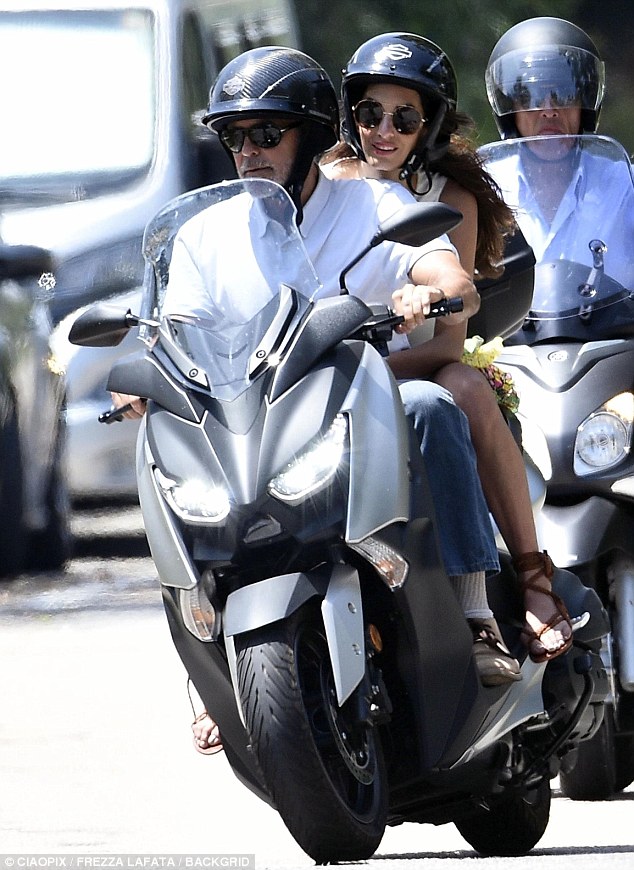 Father of young twins George Clooney, 57, crashed his scooter and ended up in hospital with trauma injuries to his pelvis, knee and hip

After the BBC released its latest list of top earners — with Gary Lineker on £1,750,000 — there were protests once more over the gender pay gap because so many were men.

Of course, BBC male ‘stars’ shouldn’t get stratospheric pay from the public purse when most wouldn’t earn a fraction of it in the private sector.

But Victoria Derbyshire taking home up to £219,000 for a four-day week when her show, according to the last figures I saw, has a mere 39,000 viewers?

Kylie Jenner is about to become the world’s youngest self-made billionaire — at 20. This junior member of the monstrous Kardashian clan has made her fortune selling make-up by posing half naked for social media and pouting with lips full of filler. She’s fooling young girls into thinking they can get her celebrity lifestyle just by buying lipstick. And they fall for it.

Can there be a more depressing example of how self-obsessed and vacuous so much of our world has become? 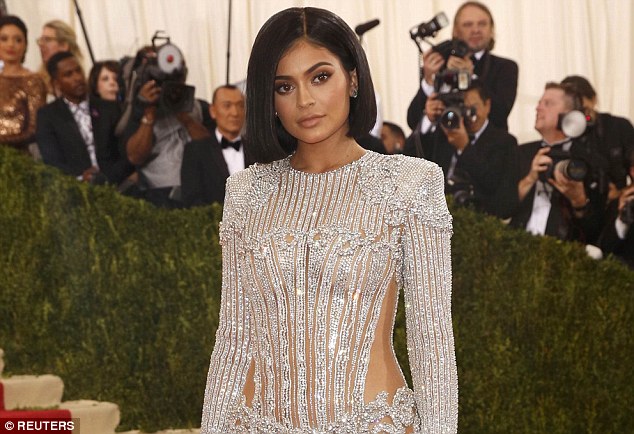 Nancy Dell’Olio says she brought stardust to the World Cup back in the day when she was Sven-Goran Eriksson’s squeeze. Since then, she’s been scoring with men half her age. ‘I just get younger and younger,’ says the brassy and brass-necked Italian. ‘I am the female Peter Pan.’ Perhaps she means the female Pinocchio.

As her parents await their divorce, Ewan McGregor’s 22-year-old daughter Clara describes her dad’s new squeeze Mary Elizabeth Winstead as ‘a piece of trash’. Which goes to show middle-aged men who dump their loyal wives for a younger model that, while their exes may eventually forgive them, their daughters never will.

Promoting her new movie Freak Show, Sting’s wife Trudie Styler says she drew inspiration for the script from her children, who were horribly bullied at school for being filthy rich and famous. My dad and my uncle used to get bullied because my gran made their school trousers from grandad’s old ones.

London Mayor Sadiq Khan defends his decision to allow a big orange baby balloon mocking Donald Trump to be flown over Westminster on the grounds of freedom of speech. He seems oblivious to the fact that it’s a freedom we would not now enjoy if the Americans hadn’t bailed Britain out in World War II.

Come to think of it, a Muslim Mayor of London wouldn’t even exist under the white supremacist Nazis. 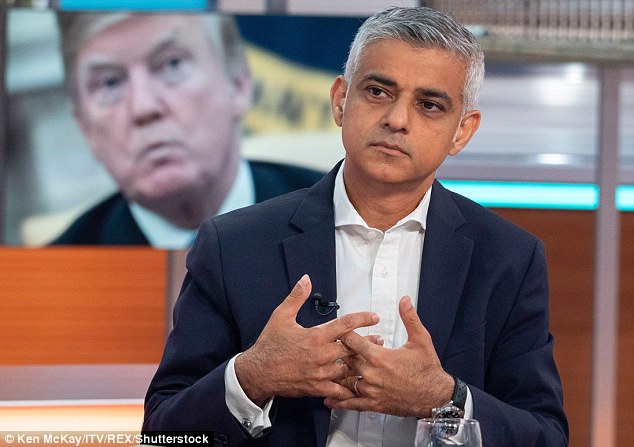 The normally sartorially splendid Melania Trump wore an ill-fitting Victoria Beckham striped frock on her day out with Theresa May’s husband Philip, presumably to fly the flag for Britain. Someone should have told her that no one buys VB, unless they want to look like a sunlounger.

Like everyone, I am delighted the 12 young Thai football players and their coach are safe. Yet am I the only one with niggling questions about this extraordinary episode?

Why were the lads in an underground cave during the monsoon season? How did they survive for nine days without food? Did meditation, led by their coach who’d trained as a monk, really save them? Why were they kept apart from their families afterwards? And why have the foreign volunteer rescuers been so reluctant to speak about the kids’ ordeal.

I’m sure, in time, it will all become clear — most likely in the movie, starring Tom Hanks as a slightly nutty, mystic, Thai footy manager.

As David Dimbleby approaches retirement from Question Time, brother Jonathan says: ‘He is someone with whom people want to spend time.’ Having been a panellist on QT for more years than I care to remember, David is the last man on the Earth I would want to spend time with. I found he’s one of those people who’s always looking over your shoulder to see if there’s anyone more important to talk to.