It’s a cliche, but it’s true. A week is a long time in politics. For Prime Minister Scott Morrison, the six weeks since former Liberal staffer Brittany Higgins aired her rape allegations must seem like an eternity. And yet, for all Mr Morrison’s impassioned responses to the barrage of disturbing revelations, he has never lost sight of his own survival, and that of his government.

The case of federal Liberal National Party MP Andrew Laming makes that clear. A member of Parliament for 17 years, Dr Laming is accused of online bullying and taking a photo of a woman’s bottom without her permission while her underwear was visible. In the vast majority of workplaces, that would be a sackable offence.

It seems not so for Dr Laming. 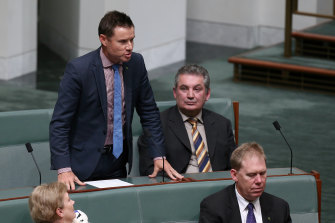 Instead, after being reprimanded by Mr Morrison on two occasions, he has taken medical leave while seeking clinical counselling. And while the behaviour was considered serious enough for Dr Laming to step down at the next election, there was no talk of the Prime Minister demanding his immediate resignation.

That is despite Dr Laming making light on Facebook of his first apology in Parliament, and then after his second apology on Sunday, in which he said he would “own those mistakes”, going  on ABC Radio the next day to say his online behaviour had been “re-invented into harassment” and that the “facts are on my side”.

For all the political theatrics swirling around Dr Laming, for the Morrison government this is about power and how to preserve it. The departure of Craig Kelly just over a month ago to the crossbench has already given the Coalition the thinnest of margins when passing legislation in the House of Representatives.

If Dr Laming were to be banished from the LNP and sent off to the crossbench – as he should be – then the Coalition would find itself without a majority in the lower house. Despite Mr Morrison’s newfound lament over the sordid behaviour of so many within the Canberra bubble, this was a line he was not willing to cross.

Instead, on Monday while unveiling his new cabinet, the Prime Minister played to type, steering clear of the tough calls and announcing a new taskforce on women’s equality, safety, economic security, health and wellbeing. Co-chaired by Mr Morrison and the Minister for Women, Marise Payne, it will include all women from the ministry as well as Treasurer Josh Frydenberg and Finance Minister Simon Birmingham.

This taskforce is in addition to a national summit to be convened within months to set new goals to prevent violence against women, an investigation into the workplace culture at Parliament House by Sex Discrimination Commissioner Kate Jenkins and a second inquiry by senior public servant Stephanie Foster examining how to build a new structure to handle complaints.

A favourable interpretation could deem all of these taskforces, inquiries and summits to be a reflection of the scale of the problem, and a good way to kick off change. But most Australians would be forgiven for being a little cynical.

This is a government rattled by how to lead the conversation, lurching from one announcement to the next. It is outrageous that Dr Laming gets to keep his job. It sends a message that for all of Mr Morrison’s fine words about listening and learning, he will not act decisively even when the transgressions are so obvious and when senior women from within his own party are calling for Dr Laming to be kicked out of the Coalition.

Mr Morrison, you know the right thing to do. It may make governing more difficult, but there is little chance of you leading on this issue until you realise that actions speak louder than announcements.

White House Farm – how many episodes are in the ITV drama? – The Sun

15 Empowering Issa Rae Quotes For When You Need Them Most