A former Liberal senator given a $500,000-a-year job on a key tribunal that reviews government decisions is being counselled for the second election in a row about displaying campaign signs for Josh Frydenberg.

Karen Synon, deputy president of the Administrative Appeals Tribunal’s social services division, has a large billboard backing Frydenberg in the front yard of her Kew home, The Age and The Sydney Morning Herald confirmed on Tuesday. 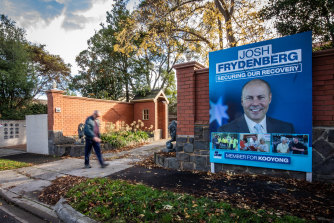 A large Josh Frydenberg campaign poster in the front yard of the home of AAT deputy president Karen Synon on Tuesday.Credit:Scott McNaughton

Frydenberg is in a tight competition against independent candidate Monique Ryan and the electorate of Kooyong has been plastered with signs for both candidates.

The AAT’s code of conduct says members must act impartially in their public and private conduct and avoid anything that could lead to an apprehension of bias.

“Members should avoid any activities, interests or associations which may undermine public confidence in the impartial performance of their Tribunal responsibilities,” the code of conduct states.

The Age and the Herald asked the tribunal whether displaying a campaign sign for Frydenberg would be considered a breach of the code of conduct.

“The AAT was unaware of the issues raised, which are now being discussed with Deputy President Synon,” a spokesperson said.

Synon said in a statement: “The placement of the campaign poster in question was authorised by Deputy President Synon’s husband.”

During the 2019 federal election, Synon posted a photo on social media of herself posing with a Frydenberg campaign poster.

Then-AAT registrar Sian Leathem revealed in Senate estimates last May that “as soon as we became aware of that, there was a discussion with then part-time member Synon”. She said the photo was subsequently taken down.

Leathem said the AAT president would believe being actively involved in an election campaign came into conflict with the code of conduct’s requirements for members to remain impartial.

Synon, who filled a casual vacancy in 1997 to become a Liberal senator until 1999, has been a part-time member of the AAT’s migration division and its precursors since 2001.

In December 2020, the government elevated her to the full-time senior role as deputy president of the social services section, for a three-year term that would have expired next year. Attorney-General Michaelia Cash renewed her appointment six days before the election was called, meaning Synon remains in the position until May 2027.

AAT officials refused to answer questions in Senate estimates about whether she had been through an interview process before being promoted to the deputy president role, which comes with a $496,560 annual salary, or whether the tribunal supported that elevation.

In later written answers, the AAT said it was in the public interest for any advice from its president to the attorney-general about its “appointment needs” to remain confidential.

This week, AAT member Michael Manetta made public allegations Synon shifted him out of a position reviewing social services cases because he overturned too many government decisions. He says he has been relegated to the “latrine duty” of the division, ordered by Synon to only hear child support percentage matters.

Synon has said she “categorically denies any implication or inference that she has acted in any manner that is not fair, impartial and just in the exercise of her statutory duties at the AAT”.

Political appointments to the AAT’s ranks have skyrocketed under the Coalition, The Age and the Herald revealed on Monday. Since it came to power in 2013, 32 per cent of appointees have political backgrounds, compared with just 6 per cent during the Howard era.

Cut through the noise of the federal election campaign with news, views and expert analysis from Jacqueline Maley. Sign up to our Australia Votes 2022 newsletter here.

What Is Robert Eggers’ 2022 Movie ‘The Northman’ Based On? It’s a Familiar Story From the Past