Four people have been charged with murdering the rapper Pop Smoke at a Los Angeles mansion.

Prosecutors say the 20-year-old was shot during a robbery at the Hollywood Hills home where he was staying in February.

Corey Walker, 19, and Keandre Rodgers, 18, are charged with robbery and murder.

Two males, aged 15 and 17, who can’t be named because of their age, face the same charges.

The two adults could face life in jail without the chance of being released if they are convicted.

Prosecutors said a decision about whether to seek the death penalty on conviction “would be made at a later date”. 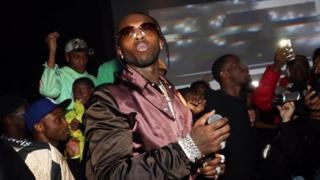 Last week, Los Angeles Police Department arrested three adults and two teenagers in connection with the shooting, which happened in the middle of the night.

The third adult has not been charged.

Pop Smoke, whose real name was Bashar Barakah Jackson, got his first US top 10 album in the week of his death.

He was a guest on DJ Target’s show on BBC Radio 1Xtra just days earlier.

The rapper had had a breakout hit with Welcome to the Party in 2019, which led to him being singled out as an artist to watch by 1Xtra on the station’s Hot For 2020 list.

The station said he “possessed the air and cadence of a rapper who has been in the game for a decade or two longer than his actual age”.

The track ended up being remixed by both Nicki Minaj and Skepta.

He had been co-signed by 50 Cent, who executive-produced his posthumous album Shoot For The Stars Aim For The Moon – which features a sample of the classic 50 Cent song Many Men, from 50’s debut album.

In the days before he died, Pop Smoke cancelled a concert, attributing it to New York Police concerns.

There have been multiple reports of homes rented by musicians targeted by burglaries in recent years in Los Angeles.

Cool Stuff: 'Guardians of the Galaxy' Print by Gabz Get a Shiny New Foil Variant

DEAL OF THE DAY: Amazon has slashed 45% off a 1L bottle of Baileys bringing it down to £12