The superannuation guarantee is currently legislated to increase to 12 per cent from 9.5 per cent by 2025. However, the federal government has said it will consider whether this should go ahead following research from the Reserve Bank and the Grattan Institute that showed it could come at the expense of wage growth during an economic crisis brought on by the coronavirus pandemic. 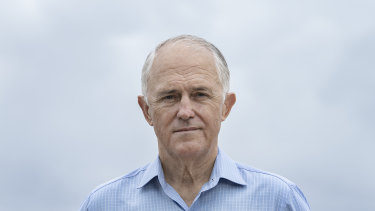 Labor, the unions, former Treasury secretary Ken Henry and former prime ministers Paul Keating and Kevin Rudd support keeping the increase, saying it will ensure an adequate retirement and there is no guarantee it will come at the cost of wage increases.

Mr Turnbull said on Monday it was his judgment that "we would be better off sticking to the legislated increase".

"This is a vexed issue because there are people who say the money is better in people's hands now than down the track. I think that is all a bit patronising to be honest," Mr Turnbull told ABC television.

A dozen Coalition MPs do not support the increase, saying people need the cash in their hands now rather than in the future.

Mr Turnbull was also scathing about the government's scheme allowing people to take up to $20,000 out of their superannucation during the pandemic.

"These are desperate times….but I think frankly, I think with the benefit of hindsight that will be seen to have been a poor quality decision," he said, adding young workers who cleaned out their superannuation due to the economic crisis would end up with "a lot less" when they retire.

He also backed former Mr Keating's view that it was mostly people on lower incomes who were raiding their retirement savings.

"The argument is people say 'I need the money right now' [but] I wonder whether it wouldn't have been better to provide more targeted support from government," Mr Turnbull said.

The former prime minister said he had "resisted efforts" to allow superannuation to be used for a home deposit when he was leading the government from 2015to 2018.

"There is a libertarian argument that says no-one should be obliged to put money into super – there are plenty of people in the Liberal Party that agree with that – I think it has been a great Australian achievement, and I think chipping away at it is unfortunate."

Mr Turnbull also said the appointment of his predecessor, Tony Abbott, as an unpaid advisor to UK Board of Trade could be "awkward to say the least" if he was representing another country.

But, Mr Turnbull said, the attention garnered by the promotion was "a bit of a beat up".

"He is one of a dozen advisers to the board of trade, and apparently is not going to be representing Britain anywhere."

Women are MORE likely to want an open relationship because they 'crave sex variety', expert claims