How long have you been in the commentary game?
I retired from professional tennis about three years ago, and I went straight into commentary. This’ll be my third year with Channel Nine. It’s been a really great transition from playing.

Three years in, how do you feel about the job?
What I love about commentating is educating the people sitting on the couch at home about tennis, and I love trying to make it feel like I’m sitting with them and explaining the game. I think that’s the way I go about my commentary: I love my sport, played it since I was a little girl and I remember getting up in the middle of the night to watch Wimbledon. So now to have the opportunity to commentate and let people listen to me educate them on the sport that I love is something that I really love doing. 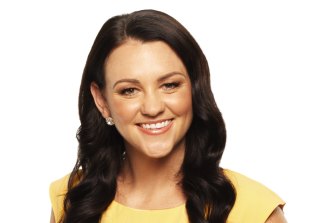 Was it a steep learning curve for you when you finished playing and stepped into the box?
Yeah, absolutely. I had a lot of mentors around me to give me tips of the trade. I’m fairly Australian in terms of the way that I speak and the way that I go about it, so I think just refining the way I get my message across has been one thing that I’ve had to learn. Then it’s definitely different when you’re in the commentary box as opposed to being out there on the court. But I think the benefit of having been a player is in being empathetic towards the player and how they’re feeling.You can hopefully draw on your experience and relay that to the public. So it’s been a really steep learning curve, but I always wanted to try the commentary route when I finished playing. The commentary I really enjoy: the on-court interviews have been something that’s maybe a bit more nerve-wracking – stepping out on the court and having the opportunity to interview Rafa and Roger and all the greats of the game.

Is it more nerve-wracking to step out on the court to interview someone than it was to step out on the court to play?
Yeah, it is, to be honest. I would much prefer to be on the other end of the microphone being asked the questions than being the one asking the athlete questions and getting the response out of them. I’ve really had to prepare my questions before I walk out on the court. Also listening is really important: when the athlete gives an answer, [one has] to really listen so you have a follow-up question. But now three years in I’m starting to find my feet and I think it’s been something that’s been, like any job, a learning experience.

When watching the game, do you ever get the urge to run back out there and play?
I think when I first finished I definitely did feel the adrenalin of being a competitor, and of being out there on the court, and particularly in Australia: when you’re an Australian there’s something about walking out on the court and feeling like you’ve got the whole country behind you. It’s a really nice feeling, and it really only happens during January because you’re away for the rest of the year. So I missed that, initially.

But you’re more at peace now?
Someone actually told me it takes about three years to feel like you’re fully retired from the game. I feel like I’m at that point now, I feel like I’ve kind of distanced myself from Casey the tennis player to my professional life. I feel like I’ve had my opportunities in tennis and now it’s about giving back to the sport that’s given me so much. I’m pretty content with watching matches and being able to go have a beer afterwards.

Do you think the public can be a bit too hard on players – particularly Australian players?
Yeah, I think there’s an expectation that the public wants Australian players to do well. When I’m watching Australian sport, what I like to see is our athletes just really give it their best, and do it with integrity and do it with grace. You can’t do much more than that, can you? I think that’s why in commentary I like to speak to attitude and body language and how they are out on the court. I think that’s the message I try to relay in tennis particularly: one person wins the tournament, so you’re guaranteed to get a lot of players who lose throughout. You have to put perspective on it for the general public, but in the same breath I think it’s important our athletes showcase their best performances, for themselves.