In the conference’s main hall, meanwhile? Tumbleweed time: sagging jaws, empty seats aplenty. The decay is as bad as in the Major era.

They will say he is an adulterer, a lazy joke. Some of them have personal gripes to settle. Perhaps he seduced their sisters. But the box office does not lie. Johnson rocks, as all those rank-and-file members made plain yesterday. 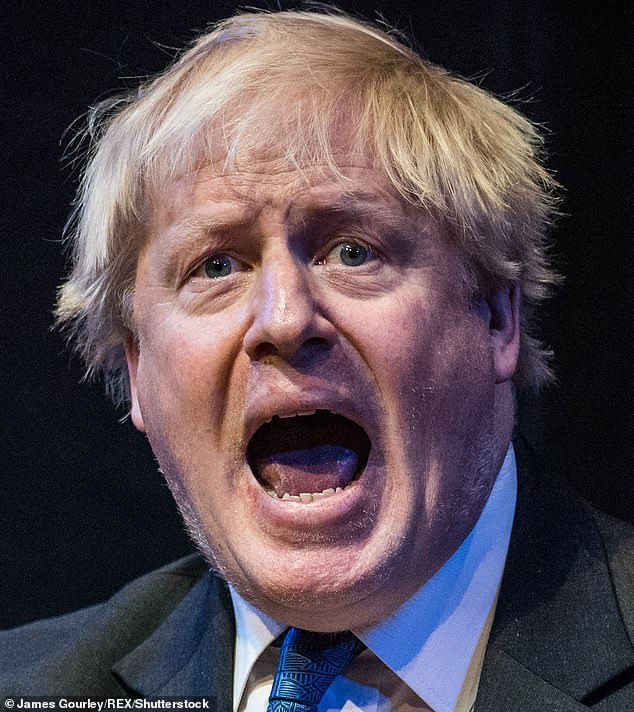 After a serious, sober build-up, delivered more in a tone of reluctant exasperation than glee, Boris shot out the words ‘chuck Chequers’. The 1,500-seater hall went nuts.

It was not just that they liked him (which they do, despite the bottom-pinching).

They liked what he was saying and they liked the solid, ungloating, respectful way he said it.

They liked his logic as he argued for lower taxes, home ownership and a greater self-confidence than we have seen from Downing Street on Brexit.

Oh, some will say, but he was so disloyal. Rot.

He praised Mrs May for her original Lancaster House position and he ended with a call to support the PM. ‘Back Theresa May in the best possible way by backing her original plan.’

The person who behaved disloyally, I’m afraid, was Mrs May, with her deceitful ambush of Boris and David Davis at Chequers. In the early passages of yesterday’s speech, Boris was pretty low key. He even sounded a bit weary. But there was a good line when he referred to Chancellor Hammond’s snipe that Boris would never become party leader. ‘That’s the first Treasury forecast for some time to have a distinct ring of truth,’ grunted a rueful Boris. 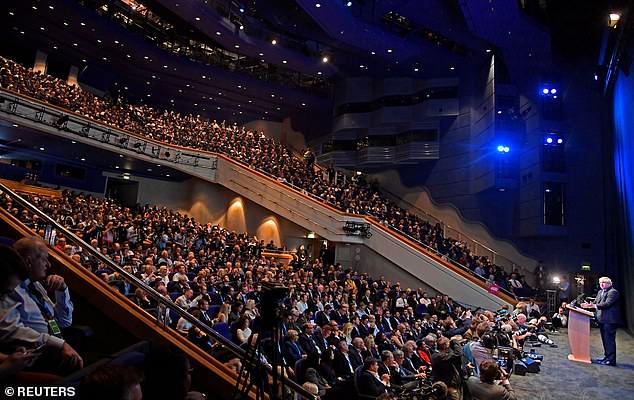 Johnson spoke to a packed out hall at the Birmingham International Convention Centre. He told the crowd to ‘chuck Chequers’ in a highly anticipated address

It was just a throwaway line but it was self-teasing and had bags of character. He really must drive dullard Hammond mad with envy. ‘Let’s say “no new tax increases”,’ he argued, reminding the audience of the inescapable truth that lower taxes bring increased yields (because they create greater growth).

Is it not astonishing that we have to resort to the conference fringe to hear such a basic Tory message? The activists perked up like the flowers in one of those Californian deserts which have just had their first rainfall for years. Finally, here were smiles among the poor, starved Tory yeomanry. At last, someone was reminding them of the reason they came to Birmingham and the reason they volunteer for the party. Without that sense of tribal purpose, how does Downing Street intend to run an election campaign?

Yesterday’s event, organised by the ConservativeHome website, was not part of the official conference. Having quit the Foreign Office, Boris is a non-person to the party hierarchy. We have reached the remarkable, depressing point where, for all the smears about Jeremy Corbyn being dictatorial, Labour conferences are much more democratic than Tory ones. You get real debate at Labour conferences. The Tory leadership still thinks it can ignore dissenting voices. King Canute could have told them what happens when you try to over-rule the tide. Boris stood there, crinkly eyed, ursine, and simply said what thousands here think: ‘Chequers is a cheat. If we cheat the electorate we will escalate the sense of mistrust.’

That, he said, would only make a Corbyn government more likely. ‘If we bottled Brexit the people of this country will find it hard to forgive.’

Volleys of applause interrupted his flow. They whooped and clapped their hands over their heads. They waved ‘Save Brexit’ placards and chanted ‘Boris! Boris!’ as he shuffled off the stage at the end, not milking the applause. He excited genuine philosophical fervour. Bang on.

Can YOU remember what was taught in school?

Coyotes are friends with badgers and this heartwarming video proves it