Halfway through the first episode of Back to the Rafters, the recently reunited Rafters family has dinner at their favourite local Chinese restaurant, Shanghai Express.

Shanghai Express is a place recognisable to many of us: lazy susans, cloudy fish tanks, food that glows with flavour. The Rafters argue about whether to get the Kung Pao chicken before each family member shares the highs and lows of their week. It is a Sunday night tradition that feels so real you can almost reach out and touch it. 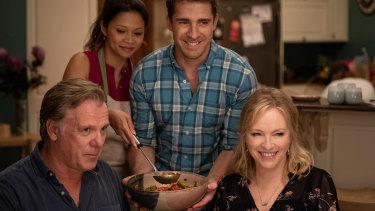 Erik Thomson and Rebecca Gibney return as Dave and Julie Rafter in Back to the Rafters.

“I get in and write what I think is true,” Bevan Lee, creator of Back to the Rafters and its predecessor Packed to the Rafters, says. “My shows have always dealt with tough topics in a, I don’t want to say wacky, but light and optimistic way.”

Lee’s light touch offers a stark contrast to the prestige dramas, including HBO’s latest Scenes from a Marriage, which often attract the most attention on streaming services. Lee says a more pared-back approach can also serve to reflect emotional truths on screen. 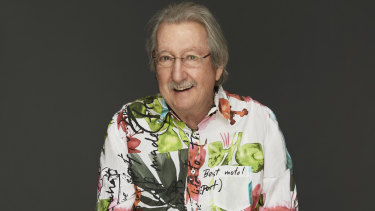 “I think there has been a certain snobbishness in Australia, and this fascination with prestige TV is just a manifestation of our own insecurities,” Lee says.

“I have a popularist way of writing, but that doesn’t make the material any worse or any better than anything else; that’s just who I am as a writer.”

The six-part series, released on Friday, begins with Julie and Dave Rafter happily ensconced in the country town Burradeena. Dave is settled into semi-retirement but Julie faces an identity crisis: Dave is enough for her but Burradeena isn’t. 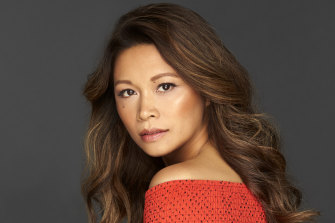 HaiHa Le stars as Cassie in Back to the Rafters.

She looks for answers in self-help books, or as Dave calls them, “those new agey things,” but ultimately realises that to move forward, she must go back, back to her family, back to the city. It’s a decision that eventually drives a wedge between her and Dave. Lee says it was a plot point grounded in personal experience.

“About two years before I wrote Back to the Rafters, my partner and I found ourselves at that same crossroads,” Lee says. “What happens when two people who are still in love get to a point where their views of the future are in opposite directions?”

Lee and his partner split up but the experience proved the re-entry point for Back to the Rafters. Relatable issues inform the major storylines in the show, including the deterioration of Julie’s father Ted (Michael Caton). In the final season of Packed to the Rafters that aired on Channel Seven in 2013, Ted was diagnosed with dementia and six years down the track, his condition has worsened.

“Ted has gone deeper into his health problems; he is on a big dipper ride,” Caton, who earlier this year revealed to Australian Story he was experiencing memory loss, said.

“My mum lived until 103, and I saw that gradual deterioration in the people around her, how you just kind of drift away and that proved to be an education for me.”

Caton, the star of the Australian classic The Castle, says the series never takes itself too seriously and kept its finger on the pulse.

“You can’t underestimate the power of the audience being able to see themselves,” Caton says.

The proof is in the Kung Pao. “Exactly, who doesn’t like Kung Pao chicken?”

With such a pointed focus on family life, the return of Rafters is well-timed. Lockdown has kept loved ones apart this year, and most are counting down the days until they can argue over Kung Pao chicken at their favourite Chinese restaurant.

“Rafters provides a dose of what we’ve all been missing, that love and connection,” Le says. “Families aren’t always easy; they can be frustrating and challenging, there are so many dynamics at play, but you still crave that; you crave the good and the bad.”

Reporter spotted chugging her coffee is hero of impeachment hearings

16 Cozy, Comfy Sweaters You'll Wear Constantly This Fall — All Under $50