Home » Lifestyle » Remy Ma & Papoose Reveal Their Plans For Baby No. 2 & Why They Had To Delay The IVF Process

Remy Ma and Papoose have their hands full with their ‘golden child,’ 2-year-old Reminisce Mackenzie — but, they’re excited to give her a sibling very soon! The rap duo revealed their exciting family plans to us!

Remy Ma and Papoose set the record straight about whether or not they’re expecting a second child while on the HollywoodLife Podcast! The rap couple, who are already parents to daughter Reminisce Mackenzie, 2, welcomed their first child together in December of 2018, after getting pregnant through IVF. Following a “tough labor,” Remy gave birth to their “golden child.” Now, the couple is making moves to begin the IVF process, in hopes of getting pregnant with their second child.

“With the golden child, we did IVF. So, in the process, they have to take eggs from me and sperm from him, they put it together and they see how many embryos they can get,” Remy, 40, recalled while discussing the couple’s new VH1 special, Love & Hip Hop: It’s a Love Thing, which airs on February 1 at 8 PM ET. “We did it twice and we got one [embryo] the first time and then we got [another embryo] the second time. So when we went, I told them, ‘Whichever was the first one — that’s the one that I want you guys to implant in.’ I didn’t want to know if it was a girl or boy or anything. And, that’s when we had my daughter,” she explained.

“But, the doctor did tell me, ‘They’re opposite sex, one is a girl one is a boy. So now, I kind of know that the one other [embryo] that we have is a boy,’” Remy revealed. Sometime in late 2019 or 2020, “I started the [IVF] process, and him here told the whole world that we were expecting already, but we weren’t. We weren’t,” Remy said, recalling the time when Papoose said that the couple was expecting “real soon” during a joint appearance on Fox Soul’s Out Loud with Claudia Jordan in July of 2020.

“We weren’t. We were going to the doctor and getting started with the process,” Remy clarified, confirming once again that she wasn’t pregnant at the time Pap had spilled the beans about baby No. 2. “[The embryo] wasn’t inside yet and that’s when you’re actually pregnant. He was just so excited,” she admitted.

The couple continued on with the IVF process until Remy had to get a “minor surgery” to remove “some scar tissue from when I was pregnant with the baby [Reminisce],” she said. Once she recovered and they were ready to get back to the IVF process, things were halted again because Remy was still breastfeeding their daughter.

“You have to be completely stop for at least a month, and that’s when we put everything on hold. She’s two, but I’ve been trying to completely ween her off of it,” Remy said, which will allow the pair to finally work towards expanding their family. “Every time she starts crying, she’s like, ‘Milk, mama milk,’ and it’s just so sad.’” 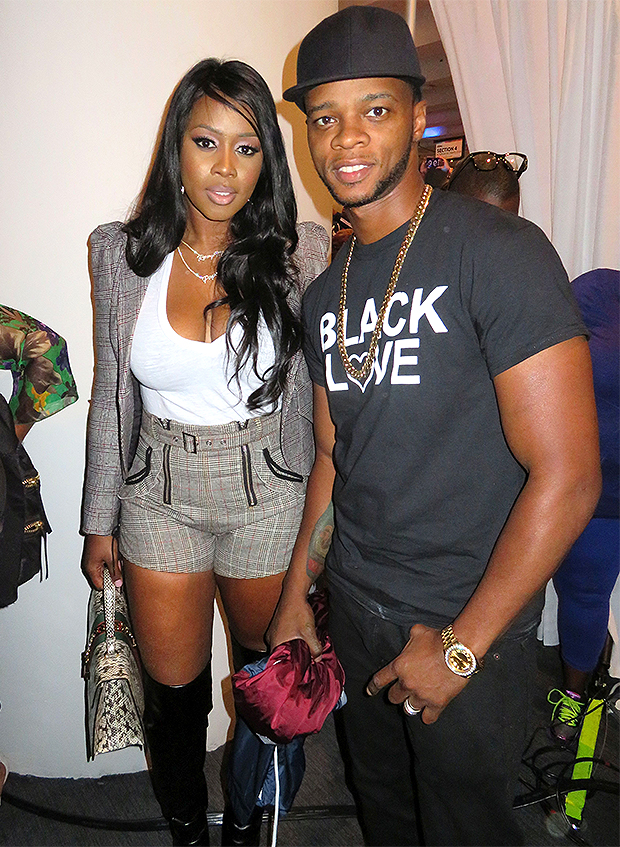 Remy went on to gush that bringing their daughter into the world has brought the couple even closer. “There’s nothing more satisfying than when you’re in a relationship with someone that’s really one of your closest friends. He’s my best friend,” she said, explaining, “I think that when you add a new life into it, it takes it to somewhere totally different, because we were both so invested in making sure that we had the best relationship possible, and now, we want to make sure that we’re the best parents possible that we’re instilling our great qualities her.”

As for Pap — who also revealed he’s retiring spitting bars after 2021 — the “Brave Thinker” rapper, 42, said he’s “gained a whole new respect” for his wife after seeing her raise their daughter. “Just breastfeeding around the clock, changing diapers, being an excellent wife and great cook, she wears so many many hats and I’ve gained a whole new respect,” he said. “I always thought that she was impatient, but she showed me that she has patience.”

Remy added, “We’ve been married this year makes 13 years and I’m still learning things about him. I feel like we literally grow closer and better each year, and I’m looking forward to more years.”

HollywoodLife caught up with Remy and Papoose ahead of their new VH1 special, Love & Hip Hop: It’s a Love Thing — where they’ll join other popular reality couples from the franchise to reminisce about some of their favorite moments from the hit show, as well as look back on their respective romances!

“It was so fun and so refreshing to film with other couples — some, I think we’re in Atlanta,  LA and we were the only ones in the Tri-state area and there was a snowstorm,” Remy recalled about the day they filmed the VH1 special. “We play all these fun games about our relationship and we got to interact with other couples. I don’t think there’s anything more fun then when you get to double date with other couples and you hear everything that they’re going through and the way that their lives interact is definitely therapeutic for other couples — like, ‘Oh okay, your husband leaves crumbs in the bed at four in the morning too?’,” Remy joked, adding, “What I liked about it the most was, we got to look back at our wedding. — That was the best thing!”

Andrea McLean husband: How did Andrea and husband Nick meet?