The retirement of veteran Nationals MP Damian Drum has triggered hopes within the federal Liberals they can win back the northern Victorian seat at the next election.

Mr Drum, a former coach of AFL club Fremantle who switched from state to federal politics in 2016, announced on Friday he would depart the seat of Nicholls at the next poll, having won its back for his party after 20 years in Liberal hands. 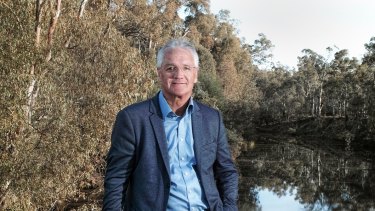 Damian Drum is retiring from federal politics, leaving his seat of Nicholls up for grabs.Credit:Simon Greig

Sam Birrell, the former chief executive of the Committee for Shepparton, Paralympian Michael Dobbie and Strathbogie Shire mayor Amanda McClaren are expected to contest preselection to be the next Nationals candidate.

Formerly known as Murray, the seat was held by National Party giant Sir John McEwen from its inception in 1949 until he retired in 1971, which included his short stint as prime minister. Former Nationals deputy leader Bruce Lloyd then held it until his retirement in 1996.

The Liberals snatched the seat through Sharman Stone at the 1996 election and held it, along with neighbouring electorate Indi, for the next two decades. The party’s rural representation in the lower house is now restricted to two seats – Wannon in the south-west and Monash in West Gippsland.

Nicholls includes the towns of Shepparton, Echuca, Yarrawonga, Seymour and Broadford. It is the centre of the state’s food manufacturing sector, including dairy processing and fruit canneries.

In a statement on Friday morning, Mr Drum, who recently undertook a taxpayer-funded trip to the Glasgow climate summit, said it was the “right time to pass the baton”.

“I am very aware that this is a job where anything less than 110 per cent is doing a disservice to the people who have put their faith in you to represent them,” he said.

He said he had made the decision following numerous conversations with his “nearest and dearest” in recent weeks.

Mr Drum was sports and veterans’ affairs minister in former Victorian premier Denis Napthine’s government and had a short-lived stint as assistant minister for the deputy prime minister under Barnaby Joyce.

He played 63 games for Geelong from 1982 to 1989 and coached Fremantle from 1999 to 2001. Perhaps his most significant contribution to the game was as assistant coach to the Sydney Swans under Ron Barassi where he was influential in rebuilding the club’s list and setting it up for decades of success.

His is the 10th retirement from within the federal Coalition ranks and follows those of fellow Queensland Nationals Ken O’Dowd and George Christensen.

Greater Shepparton deputy mayor Rob Priestly in October announced he would contest the seat amid frustrations about federal climate policy. The state seat of Shepparton is held by independent Suzanna Sheed, who won following the retirement of a long-time Nationals incumbent in 2014 by making water policy a major issue.

But Mr Drum, himself a long-time critic of the Murray-Darling Basin Plan, issued a parting warning about electing an independent.

The federal Nationals had approached Victorian deputy leader Stephanie Ryan to consider contesting the seat, but she has told officials her focus is on returning the Coalition to power at Spring Street.

The Victorian division of the Liberals is expected to open preselection within days, with potential candidates include businesswoman and long-time community advocate Cheryl Hammer, who contested the state seat for the party at the last state election, and Stephen Brooks, who has previously contested preselection in Indi.

“Drummy is very much a team player. He revels in being the Whip, but does have a tendency for mission creep to any other role he believes he is suitably qualified,” Mr Joyce said. “He is very well liked by his colleagues and beyond being a Whip, he also moonlights as a National Party corner store operator. After a long career, it is sad but makes sense that he wants to spend more time with his wife and family.”

Two in three young men prosecuted for rape are cleared

DOMINIC LAWSON: The more money you make, the happier you will feel