Things got extra tense during the March 28 episode of ‘RHOA’, when Porsha finally talked through her issues with Marlo.

The Real Housewives of Atlanta‘s Porsha Williams and Marlo Hampton went toe-to-toe during the March 28 episode, when the former revealed that she still isn’t over the latter’s newfound friendship with Kenya Moore.

“Well, since this seems like a nice, healing space, I feel like we should talk,” Porsha told Marlo after pulling her aside, following the group’s dancing class in New Orleans. “I feel like your movement has changed being a friend to me.”

“It’s been like an elephant in the room and I feel it’s different because of Kenya,” Marlo shared, to which Porsha replied, “This whole thing with Kenya if you want to bring it up. You had your showroom, I didn’t know when the showroom was opening. I knew that you were having it because you had told me about it.”

“I didn’t invite anyone to it,” Marlo then said before explaining why Kenya went. “She called and asked could she come.”

“I would love to support my friends, but that opportunity wasn’t there,” Porsha replied. “And then now you’ve been here this whole weekend, you have not called my phone, nothing.”

The ladies traveled to New Orleans this week, and Porsha wasn’t happy with the way Marlo was ignoring her but giving Kenya special attention.

But Marlo didn’t see it that way, as she told Porsha, “I am a friend to you and I feel like you don’t trust me being friends with someone who you do not f*** with. Let’s keep it one hundred. I wasn’t here for Kenya at all when y’all was doing playdates.” 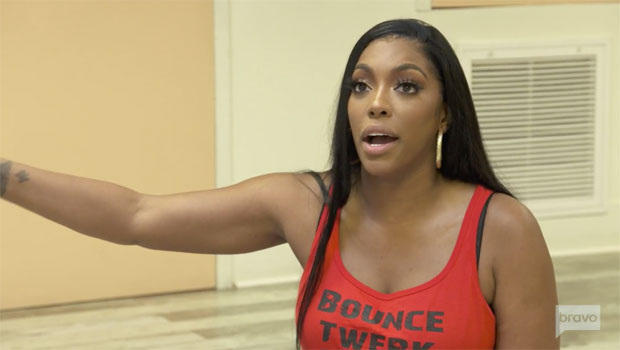 Then, a flashback showed a scene from last year, when Porsha and Kenya were on good terms and having baby playdates before their falling out over “strippergate” this season.

After Marlo tried to explain why she chose to make up with Kenya earlier this season, Porsha said, “And as soon as ya’ll met up, that’s when your energy changed.”

“I feel like that’s when you changed,” Marlo clapped back.

But what truly irked Porsha was when Marlo asked her whether or not the rumor about the stripper was true. Porsha said no one, who is truly her friend, has had to ask that yet, which made her question Marlo’s loyalty to her even more. Porsha obviously denied the rumor that she had sex with the stripper at Cynthia Bailey’s bachelorette party, and their conversation didn’t really end well.

And when both of the ladies rejoined everyone on the bus, Marlo said she didn’t want to talk because she was exhausted from the conversation she had with Porsha. Kenya tried finding out what happened, but Marlo wouldn’t divulge very much.

Earlier in the episode, Drew Sidora confronted LaToya Ali over her decision to not drink while in New Orleans. And LaToya was so irked by it that she called Drew a “bitch”. Kenya also upgraded her hotel room after Drew gave her the worst one of the bunch. And we’re sure she’ll be paying a hefty fine when she leaves because baby Brooklyn took a crayon and drew on everything in sight.

China releases app to alert citizens at risk of coronavirus

Tiger Woods Sets His Sights on Another Win: What to Know About the Upcoming Ryder Cup