Home » Lifestyle » Saddling up to meet the audience challenge

Opera Australia has unveiled a broad-ranging 2020 program that includes two musicals, as part of its constant push to attract audiences to works beyond evergreens such as Aida and La Traviata.

Fiddler on the Roof, performed in Yiddish, and Tony-winning The Light on the Piazza, starring Renee Fleming, will sit alongside productions that include Verdi’s Attila, Fromental Halevy’s La Juive as well as crowd-pleasers such as Don Giovanni and La Boheme.

"For me it's actually trying to find this bridge between opera and what I think contemporary opera needs to be,” said artistic director Lyndon Terracini. 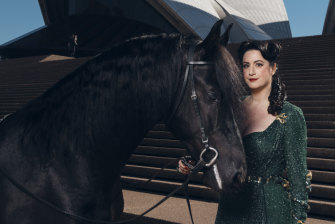 Armenian-Australian Soprano Natalie Aroyan will share the stage with a horse in Attila.Credit:James Brickwood

“It’s no secret, despite protestations from some in the composition community that audiences don’t like going to contemporary operas. We’ve got to solve that, otherwise what’s going to happen? You can’t just continue to do all the pieces we love to do and not try and find a solution for the future.”

“Indirectly, everyone who pays tax in Australia is contributing to Opera Australia,” he said. “If we are going to accept that money it is our obligation and duty to play to as many people as we possibly can.”

Despite it being written in English, Terracini said hearing Fiddler On the Roof performed in Yiddish adds a fresh dimension to the musical.

“It’s a very different proposition from doing it in English and frankly I'm not that interested in just doing Fiddler in English again.

Opera-goers can expect to see more fully digital productions next year, including a Davide Livermore directed production of Donizetti’s Roberto Devereux and a return of this year’s Aida.

“Digital productions are well past being an experiment now,” said Terracini. “But it’s still a work in progress. Some shows have worked better than others. But we get better at doing it each time. We’ve given people the chance to see what is possible rather than just whacking an image on screen.”

And in another innovative move – albeit one that ignores WC Fields’ famous warning on working with children and animals – March’s production of Attila, a co-production with Milan’s La Scala, will feature a live horse.

“Attila comes in on a horse. A big black horse. It’s fantastic,” said Terracini. "La Scala opened their season with it last year and it was a huge success. It’s a phenomenal piece."

Lea Seydoux praises James Bond and hails him as a 'feminist'