Proof most best-before dates should be binned: From six-year-old chicken soup to two-year-old pesto, SARAH RAINEY sent a selection of her store cupboard antiques for analysis. The results will amaze you

What’s lurking in your fridge and at the back of your kitchen cupboards? A tin of tuna you’ve had for, gulp, years, or an old block of cheese, plus other sundries well beyond their best before dates?

Your instinct is probably to throw them away and so add to the UK’s growing problem with food waste.

A recent report found that the nation’s biggest supermarkets throw away 190 million perfectly edible meals a year. The UN says that every year, a fifth of household food ends up in the rubbish.

Why? Often because the foods destined for the bin were approaching their ‘best before’ or ‘use by’ dates, which many of us take as a sign they are going off. But that’s not necessarily the case. 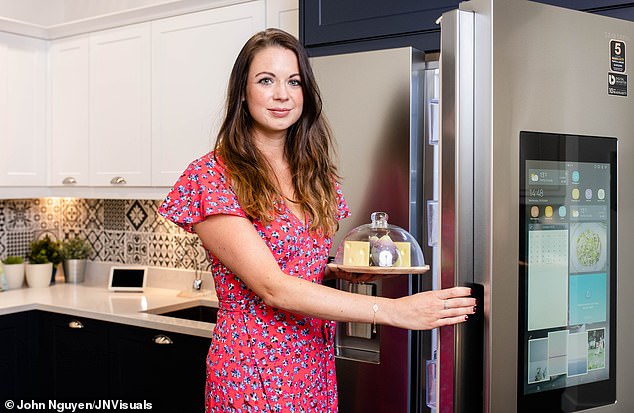 Sarah Rainey (pictured) sent her long-expired food to NationWide Laboratories, in Lancashire, to find out how edible food actually is past its best-before date

While ‘use by’ dates (found on meat, dairy and other fresh foods) are about safety, meaning food shouldn’t be eaten once this date has passed, ‘best before’ (found on tins and packets) signifies quality, meaning the food is usually fine to eat but may not be at its best.

So how edible is food past its best-before date? SARAH RAINEY rummaged in her cupboards for packets, tins and boxes with long-expired dates and sent them to leading microbiology centre NationWide Laboratories, in Lancashire, to find out… 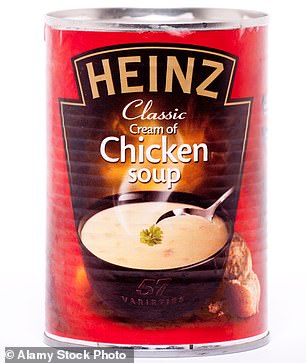 WHAT IS IT? An unopened tin of Heinz chicken soup from 2014. Though a little dusty, it looks in perfectly good condition.

APPEARANCE: The soup inside looks identical to the contents of a newly bought tin. 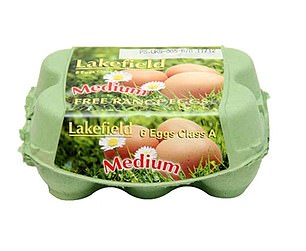 Eight days out of date

WHAT IS IT? A box of six medium free-range eggs from a corner shop.

Eggs are one of the few products to have a ‘best before’ date; they are generally considered safe to eat up to three weeks after that if kept in the fridge.

Any longer and you risk salmonella bacteria multiplying inside the shell.

APPEARANCE: Once cracked, the eggs look normal: the whites are clear and runny; the yolks intact.

SMELL: Rotten eggs have a very distinctive sulphurous odour; these don’t smell of anything.

BACTERIA COUNT: Low. The tests detect 20 ‘colony-forming units’ (CFU) of bacteria per gram, so they are just starting to go off but still safe to eat. No salmonella present. 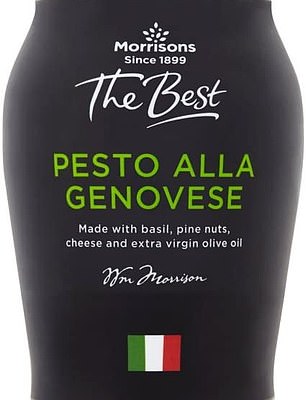 Two years and four months out of date

WHAT IS IT? A 190g jar of Morrisons ‘The Best’ pesto, made with basil, pine nuts, pecorino cheese and extra virgin olive oil.

APPEARANCE: A little oily on top but otherwise normal in texture. Still a vibrant green.

SMELL: Having been unopened for so long, the smell of herbs and garlic is quite strong but it’s not unappetising or sour.

BACTERIA COUNT: Zero. The oil has preserved the contents perfectly. 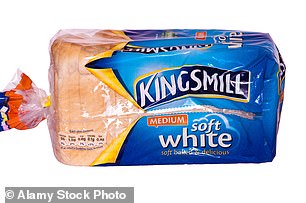 Five days out of date

WHAT IS IT? A loaf of unopened white Kingsmill bread, sliced medium thick.

APPEARANCE: Condensation is starting to form inside the packet and the bread is a little less ‘squeezably soft’ than the slogan suggests.

But it’s far from stale and there is no evidence of mould.

SMELL: Unpleasantly sweet and yeasty. Once the bread has had a minute or two to ‘breathe’ it smells more edible.

BACTERIA COUNT: Zero. Despite the slight changes in appearance and smell, this bread is still good. 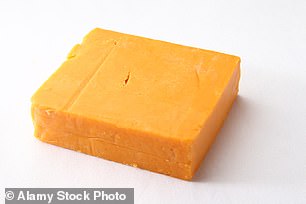 A month-old block of Red Leicester cheese was technically edible, but Sarah said she wouldn’t eat it due to the ‘old sock’ smell

One month out of date

WHAT IS IT? A block of Red Leicester, bought from a corner shop. It is more stable than milk or yoghurt and so has a ‘best before’ date. Only fresh cheeses such as ricotta are given ‘use by’ dates.

APPEARANCE: Bright orange and mould-free but starting to go a bit squidgy at the edges.

SMELL: Not great. It has that nasty ‘old sock’ odour of gone-off cheese.

BACTERIA COUNT: Extremely high. The tests detect 200,000 CFU per gram of cheese — but the scientists say this is no cause for concern.

As cheese is made by putting bacteria into pasteurised milk, there is no unacceptable bacteria count. What is detected could also be lactic acid-forming bacteria, which are a by-product of the ripening process but don’t count as a pathogen (‘bad bacteria’).

EDIBLE? Technically, but due to the smell I wouldn’t personally eat it. 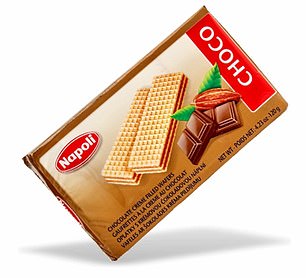 Five months out of date

WHAT IS IT? A packet of 79p wafer biscuits, filled with a chocolate-flavoured cream.

APPEARANCE: Completely normal. Surprisingly, these are still crisp and the cream inside is gooey.

BACTERIA COUNT: Medium. The tests uncover 100 CFU per gram, which is the third-highest of the lot.

It isn’t dangerous but it shows biscuits can go off, not just become stale, and shouldn’t be left unopened for months. 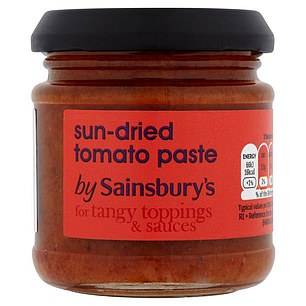 A three-year-old jar of Sainsbury’s sun-dried tomato paste was technically edible, but its smell and taste was past its best

WHAT IS IT? Sainsbury’s sun-dried tomato paste, made from tomatoes, garlic, sugar, salt, herbs and sunflower oil. The instructions say to keep it unopened in a cool, dry place.

APPEARANCE: This is grainy in texture and starting to turn a dull brown colour. There is a layer of gloopy oil on top.

SMELL: Musty and sour, with a pungent, lingering aroma that doesn’t smell at all right.

EDIBLE? Technically yes; you wouldn’t get food poisoning. But it’s clearly past its best in terms of smell and taste. 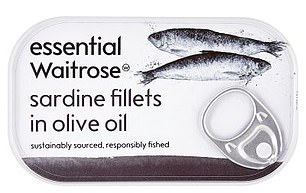 One year and nine months out of date

WHAT IS IT? Waitrose Essential sardine fillets in oil. Fresh fish and meat have ‘use by’ dates, but tinned alternatives are so well-sealed they have ‘best before’ dates.

APPEARANCE: Still in one piece and with some grey-blue colour.

BACTERIA COUNT: Zero. The tests find no bacteria or pathogens. 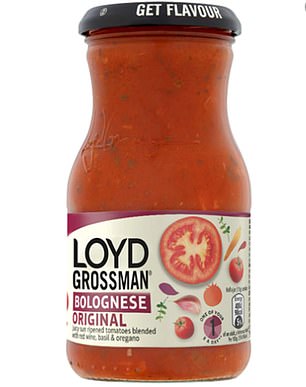 Seven months out of date

WHAT IS IT? Loyd Grossman original Bolognese sauce, made with sun-ripened tomatoes, red wine, basil and oregano. The storage instructions say that the 350g jar should be kept in a cool, dry place.

APPEARANCE: The contents have separated a little but otherwise it’s normal.

SMELL: As appetising as the day it was bought.

BACTERIA COUNT: Low. The lab found 20 CFU per gram of sauce, which is well within the legal limits; and no trace of other harmful pathogens like e-coli. 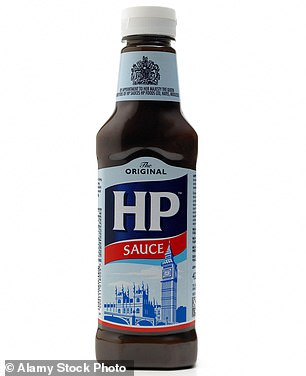 Three years and five months out of date

WHAT IS IT? A large, dusty, unopened bottle of the nation’s second-favourite condiment.

BACTERIA COUNT: Zero. Sauces such as ketchup, brown sauce and mustard are well-preserved with plenty of sugar and salt, and sealed with foil under the plastic cap, so they take a long time to go off. 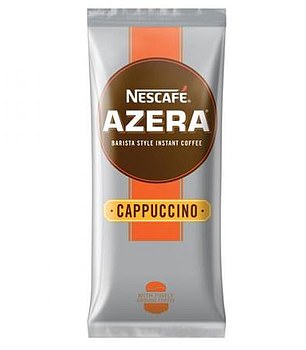 Six years and five months out of date

WHAT IS IT? Six Nescafe Azera sachets of barista-style instant coffee. Powdered and designed to be mixed with boiling water, they are made from skimmed milk powder, coffee and sugar.

APPEARANCE: Each sachet is filled with brown powder that looks normal and clump-free.

SMELL: Very bland and sweet. Barely a whiff of coffee, so this would make a far-from-fragrant cup and be low on taste.

BACTERIA COUNT: Medium. Tests uncovered 120 CFU per gram, making it the second-highest of the lot. But this, the experts say, is still in the safe range and there was no trace of listeria, etc. 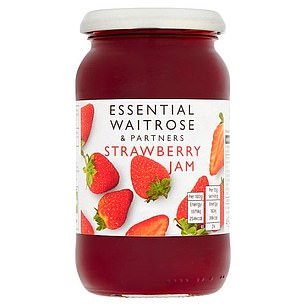 Six months out of date

WHAT IS IT? Waitrose Essential strawberry jam. This has been stored in the fridge, which may have slowed its decline even further.

SMELL: Sweet. It’s not very fragrant but that isn’t down to decay. Keeping it chilled may just have dulled its appeal. 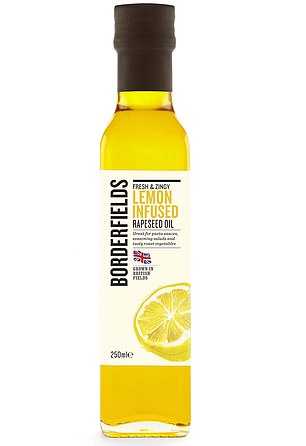 Lemon-infused rapeseed oil was stored for four years, but was only 18 days out of date

Four years, 18 days out of date

WHAT IS IT? An unopened bottle of gourmet lemon-infused rapeseed oil, bought from a farm shop six years ago.

Keep oil too long (or expose it to too much light or heat) and the fat molecules break down, making it rancid.

APPEARANCE: I don’t remember it being this orange and the oil is slightly cloudy, but there is no sign of rot or mould.

SMELL: Artificial; the freshness seems to have faded over time.

Who won a Bafta Award in 2018, where was it held and who hosted?

Is Storm Callum heading to the UK, when will it hit us and what is the latest forecast?

Cleaning: How to properly clean and sanitise your reusable face mask