Contrived, gushy – but I loved every second… cheese and all! SARAH VINE’s verdict as Adele marks her new album with a celebrity TV special

We are huge Adele fans in my house. My daughter in particular, who is 18 and idolises her, while I’ve followed her progress ever since she released her first album, 19, in 2008.

The mixture of power and vulnerability in her voice makes her irresistible. It’s a quality she shares with all the greats, from Judy Garland to Dusty Springfield. Her lyrics are raw, honest, poetic – she is an expert wordsmith as well as a great singer.

When she speaks, the contrast between her sublime singing voice and that no-frills Queen Vic accent never fails to raise a smile. And it’s a reminder of why we love her so much: She’s authentic, a real person who has got where she is today through hard work and talent, a peerless performer, a once-in-a-generation gem. 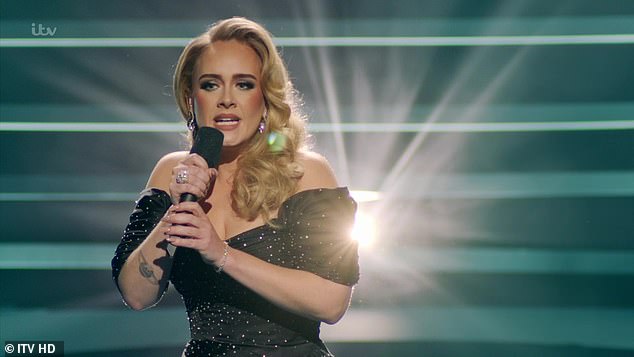 It’s hardly surprising then that when she releases a new album, the excitement is off the scale. This album – 30 – has been no different.

It has been trailed for weeks, and Adele herself has promoted it heavily. She’s had it up in lights in Paris and Rome, she’s done Vogue and Oprah, she’s been all over social media.

And she’s talked a lot about herself: Her life, her divorce, her weight loss, her father, her son. All fascinating – she is a very interesting young woman in so many ways. But the net result is that the music itself has felt slightly second fiddle and the hype – dare I say it – has raised expectations sky high. Maybe too high.

Because the awful truth is that, for a lot of fans, the grand reveal (the album was released on Friday) has felt slightly anticlimactic. It’s a good album, and by the standards of any other artist a great one, but there’s no Rolling In The Deep, no Set Fire To The Rain. Perhaps that’s just because songs like that have become old, familiar friends – maybe it will take a while to get to know these new ones. 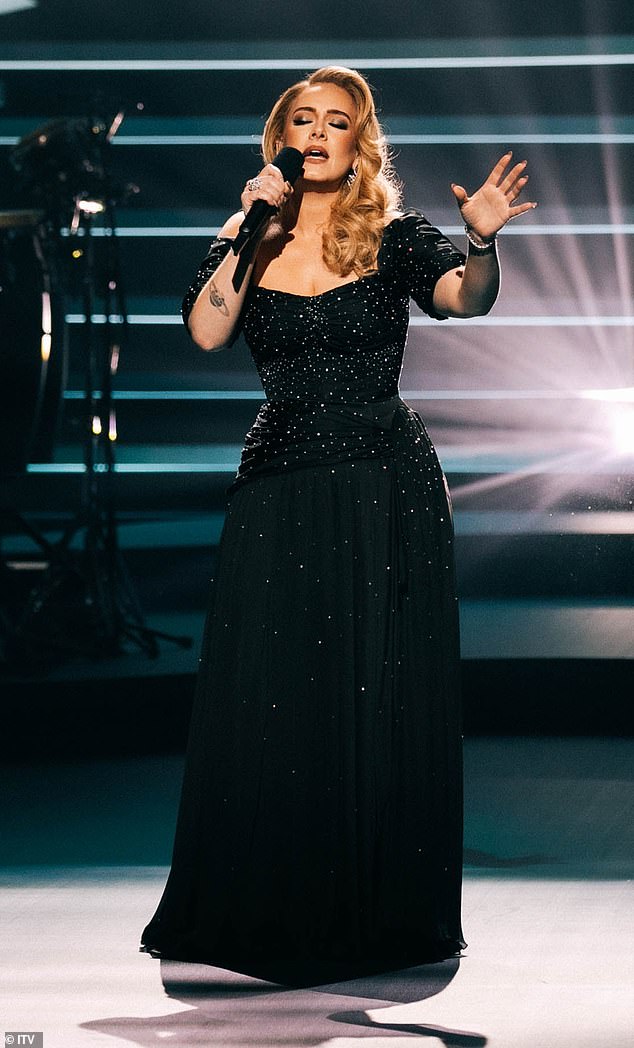 The second she walked on stage, in a full length shimmering black gown, perfectly accentuating her new hourglass figure, I was captivated writes SARAH VINE 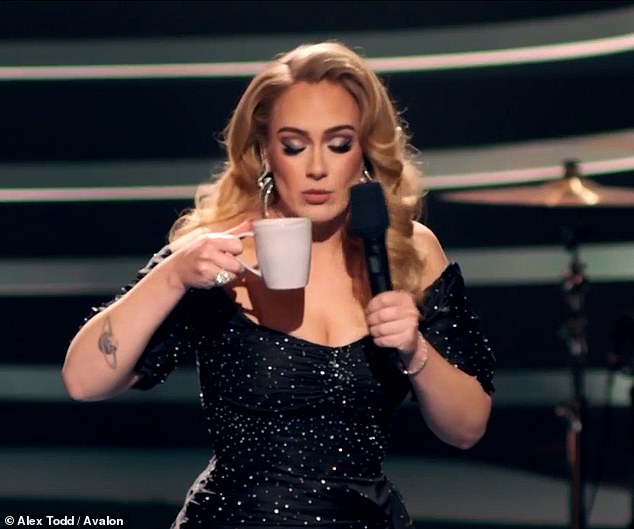 A quick swig from a very ordinary-looking mug of tea to remind everyone that, though she’s been living in LA for the past five years, she’s still just an English girl at heart 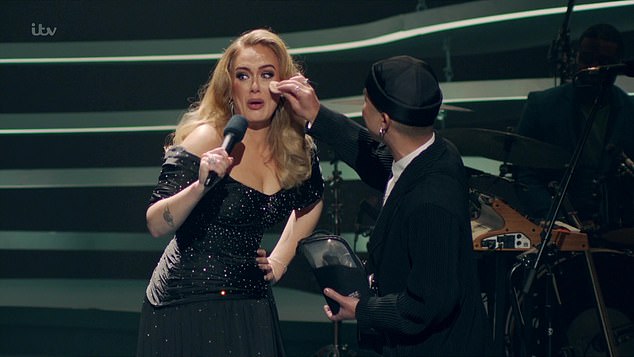 So it was with some trepidation that I tuned into last night’s ITV special, An Audience With Adele at the Palladium. But the second she walked on stage, in a full length shimmering black gown, perfectly accentuating her new hourglass figure, her Saturn Return tattoo clearly visible on her arm, I was captivated.

She launched in with Hometown Glory – old-school Adele, sentimental, romantic, evocative. Then it was the turn of Hello, another familiar, signature ballad, executed to perfection.

A quick swig from a very ordinary-looking mug of tea – perhaps a slightly affected touch, as if to remind everyone that, though she’s been living in LA for the past five years, she’s still just an English girl at heart – and then it was straight to the ‘audience’ bit of the show.

‘Haiii! ’Ello! I got really emotional when I come round the bend up there’, she began, pushing up the London accent perhaps just a little too much. First up, Dawn French, sporting her very funky new blonde crop, with a slightly uneventful question about relationships. 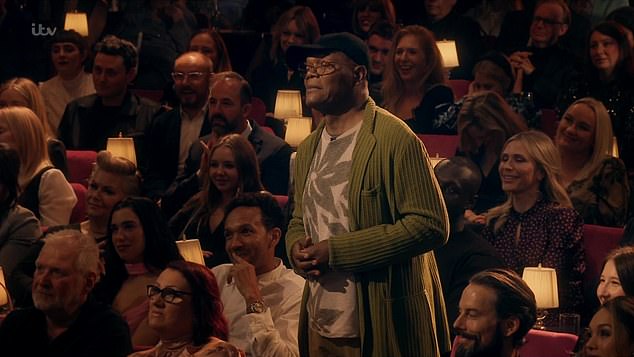 Samuel L Jackson: ‘Have you ever used your “Adelity” to get out of trouble?’ 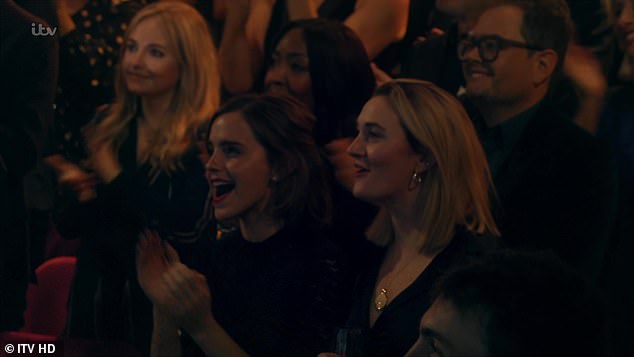 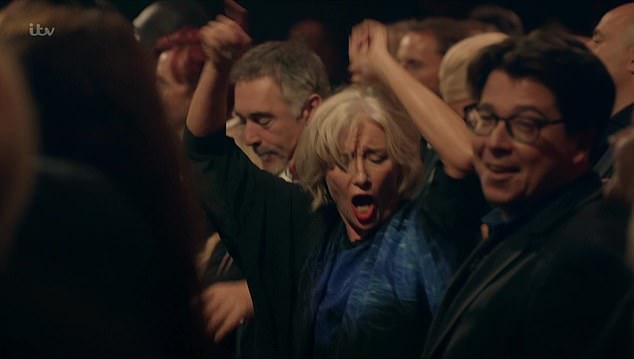 Next Samuel L Jackson: ‘Have you ever used your “Adelity” to get out of trouble?’ An anecdote about a star-struck LA traffic cop, then back to the music: The up-tempo Send My Love, which had the audience of celebrities – Emma Watson, Dua Lipa, Jonathan Ross, Piers Morgan, a very uninhibited Emma Thompson – breaking out into a bit of collective dad dancing.

Then it was the turn of the new single Easy On Me. She launched into it, then stopped, overcome –and started from scratch. A bit contrived, perhaps – but why not? It sounded so much better live than on the recording. And on it went. More songs, more questions, more self-deprecating jokes. From Idris Elba: What is she most proud of? Answer: Headlining Glastonbury. Alan Carr asked a mischievous question about her exes, and then a barnstorming rendition of Rolling In the Deep segued seamlessly into a heartbreaking performance of Hold On, one of the most brutally reflective songs from the new album. 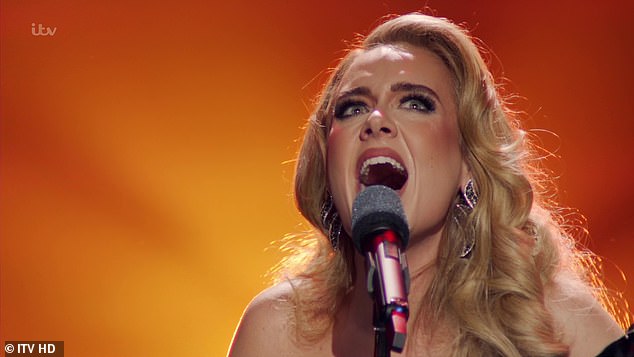 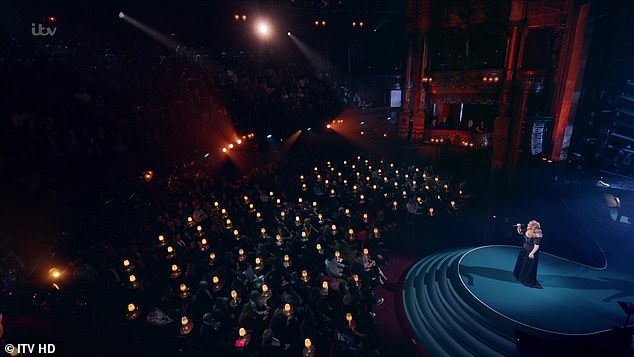 She performed for the likes of Emma Thompson, Andrew Lloyd Webber and Emma Watson 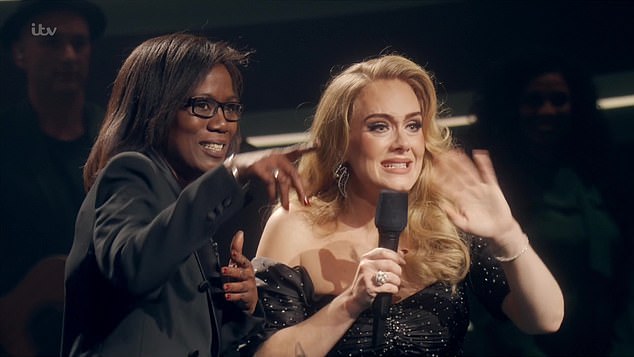 The climax was a tearful reunion with an old English teacher Miss McDonald – once again, a reminder of her ordinary London roots – and the sight of Stormzy, some say an old flame, singing along to Someone Like You, still one of her strongest pieces of writing.

To finish, Love Is A Game, another track from the new album – all soaring, quivering Hollywood strings, echoes of Otis Redding and Etta James.

What can I say? Well, I loved every second, cheese and all. Sure, it was all a bit showbiz gushy; true, it was very contrived in parts. But then that’s the nature of these things.

What cannot be denied is the calibre of her talent. Because that is what this woman is really about. Not the clothes, not the weight loss, not the exes – but her music, her voice, her artistry that she seems to inhabit so effortlessly.

After this performance, I can forgive her her LA excess. Adele has proven, once again, that she is the real deal, a diva deserving of every success – and her undisputed status as Queen of everything.

Amazon Echo update: Everything new you should be asking Alexa right now

Cardi B Steals the Spotlight at the 2018 Met Gala