ISTANBUL — Secretary of State Mike Pompeo said Tuesday the Trump administration is revoking visas of Saudi officials who have been implicated in the death of journalist Jamal Khashoggi. President Trump on Tuesday sharply criticized Saudi Arabia.

“They had a bad original concept and the cover-up was one of the worst in the history of cover-ups,” he said.

But, once again, he stressed the importance of the U.S.-Saudi relationship.

Mr. Trump was responding to Turkish President Recep Tayyip Erdogan, who contradicted Saudi Arabia’s story that Khashoggi was killed in a fight, calling it instead a “savage murder” and demanding the 18 suspects arrested by Saudi Arabia be brought to Turkey and put on trial.

What Erdogan did not talk about is the widely reported audio recording that Turkish officials allegedly possess of Khashoggi being tortured and killed inside the Saudi consulate in Istanbul. We still do not know whether that recording actually exists.

Another unanswered question is where Khashoggi’s body ended up. On Tuesday, Turkish police searched a car abandoned in an underground parking lot that’s registered to the Saudi consulate. Turkish media claim they found personal possessions which they swabbed for DNA.

Meanwhile, Saudi Arabia is scrambling to control the damage. In the Saudi capital of Riyadh, the king and Crown Prince Mohammad bin Salman delivered their personal condolences to Khashoggi’s grieving son and brother. 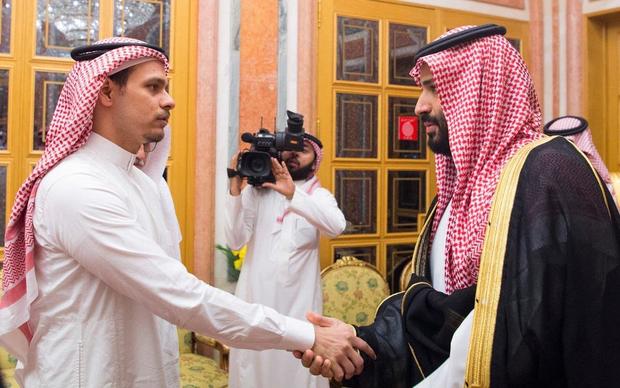 But many suspect the crown prince was more involved in Khashoggi’s killing than Saudi Arabia will admit. Nevertheless, he was applauded Tuesday at an international investment conference in a glitzy Saudi hotel.

At least two dozen business and political leaders pulled out in disgust over Khashoggi’s slaying. But companies including Pepsi and Six Flags have sent representatives. On Tuesday alone, deals worth around $50 billion were signed.