Following in their footsteps? Saturday Night Live has facilitated many romances between celebrity hosts and show cast members through the years, and so, Selena Gomez is keeping her eyes peeled for The One.

Selena Gomez Through the Years

While the former child star used the 28-year-old King of Staten Island star’s tight bromance with the 32-year-old “Bloody Valentine” crooner as an example of SNL-based relationships, Davidson also sparked romance with several past and current flames on the set. The Staten Island native met both ex-fiancée Ariana Grande and current girlfriend Kim Kardashian in March 2016 and October 2021, respectively, during their hosting debuts.

“Since I don’t want to try the dating apps, I just want to put it out in the universe that I’m manifesting love,” Gomez teased on Saturday. “And I would like to say that I’m looking for my soulmate, but, at this point, I will take anyone.” 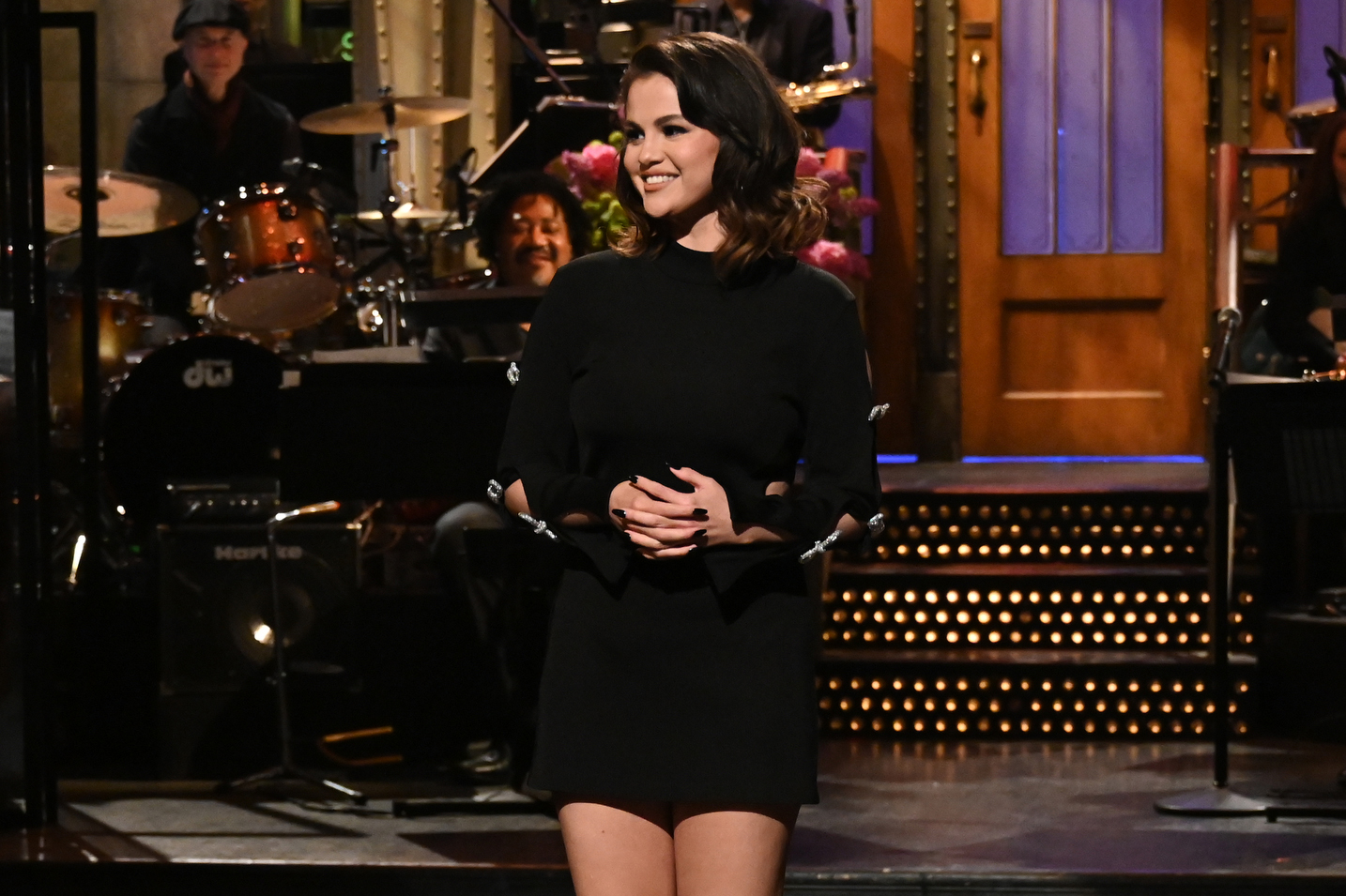 The Wizards of Waverly Place alum’s monologue soon became a version of The Dating Game when cast members Kyle Mooney, James Austin Johnson and Punkie Johnson all volunteered to be her romantic partner.

After the Texas native shot down both Mooney and James Austin’s offers since they were already married, she jokingly noted that she felt “kind of a vibe” with Punkie, 37. “Let’s see how the afterparty goes [first],” Gomez quipped.

Elsewhere in her monologue, the Spring Breakers star recalled the hosting advice she received from her past and present costars, including Miley Cyrus, Steve Martin, Martin Short and Barney the Dinosaur. Gomez even led the studio audience in a round of the Barney & Friends theme song.

Stars Get Real About Their ‘Saturday Night Live’ Hosting Debuts

The sketch series announced earlier this month that the Only Murders in the Building star would join the ranks of SNL hosts.

After her sweet callout, the Disney Channel alum’s mom, Mandy Teefey, shared her own excitement. Teefey, 46, replied via Instagram comment: “You are going to own this!!! You have beyond made it, love!! XO.”

As the Rare Beauty mogul began her rehearsals earlier this week, she was ready to bring out her comedic side. “Can’t I do all 40 sketches,” Gomez jokingly captioned a Wednesday, May 11, Instagram Story photo reading through an array of scripts. 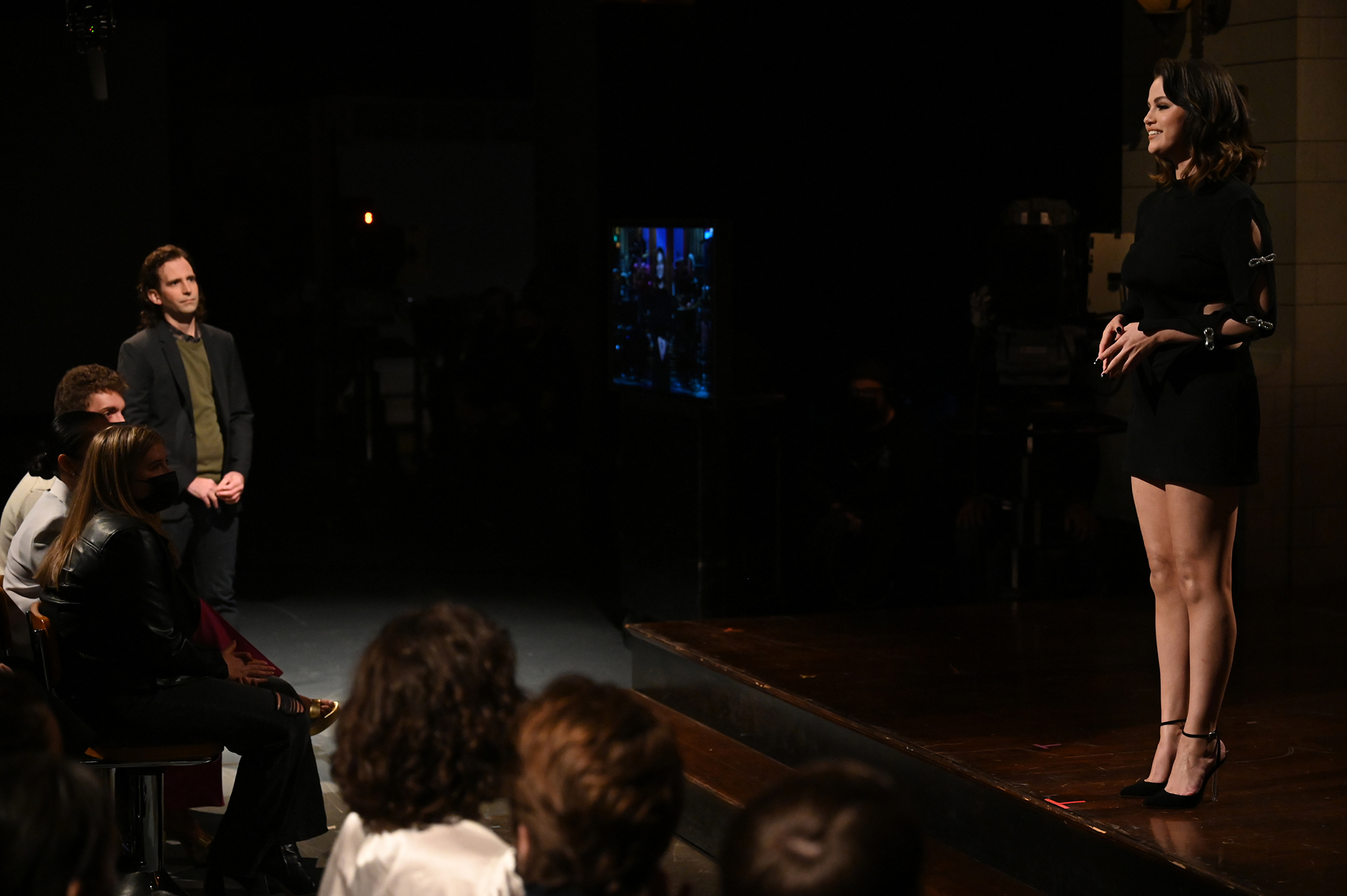 Ahead of her Saturday gig with musical guest Post Malone, Gomez previously rocked the Studio 8H stage in January 2016. The Grammy nominee belted out a medley of “Good for You” and “Same Old Love” before singing a sultry rendition of “Hands to Myself.” Gomez also made a brief cameo in a The Bachelor-inspired skit titled “Bland Man,” where seven contestants — including host Ronda Rousey — vied for the affections of an ordinary man, played by Taran Killam. The Wondermind cofounder portrayed herself, which instantly won Killam’s character’s heart.

Most Memorable ‘Saturday Night Live’ Hosts Over the Years

After working as a child star across Disney Channel programming, Gomez has gone on to show off her comedic talents on Hulu’s Only Murders in the Building opposite former SNL cast members Martin, 76, and Short, 72. (Season 2 is slated to premiere on Tuesday, June 28.)

The Cheaper By the Dozen actor even joined his Hulu costar for a pretaped sketch on Saturday. Martin portrayed the fictional inventor of the whoopee cushion, Archie Gizmo, who detailed how a woman (played by Aidy Bryant) inspired his prank design.

For more, watch the clip above!

Magistrates with criminal records to boost diversity and end shortage

Teddi Mellencamp Fires Back at Comments About Her Neck Lift

Gran, 82, dances with joy as she shares glimpse of ‘Christmas between the sheets’ with toyboy husband, 36

'The Kardashians' Episode 2: 'Did Somebody Tape That?' Recap