Home » Lifestyle » Should a man remove expensive shoes before proposing?

I SHOE! Snaps of boyfriends taking off their trainers before proposing to avoid ugly creases spark debate – with critics saying it shoes they care MORE about their looks than their partner

A woman who was unimpressed after spotting a trend for men removing their expensive trainers during marriage proposals, has sparked a heated debate on if men should be blasted for the action.

Hannah Legg who is believed to be from the UK, posted a selection of snaps of men protecting their shoes while proposing on the Facebook group That’s It, I’m Proposal Shaming.

She explained that although she understands the desire to look good, during a proposal the focus should be on the lady that you love rather than protecting your expensive trainers.

The post divided the group’s almost 81,000 members, with some arguing that if a man cares about his belongings, he will ‘also care about his wife’.

But many said men shouldn’t ‘be so materialistic’ and that they would cringe, if their partner removed his shoe before getting down on one knee. 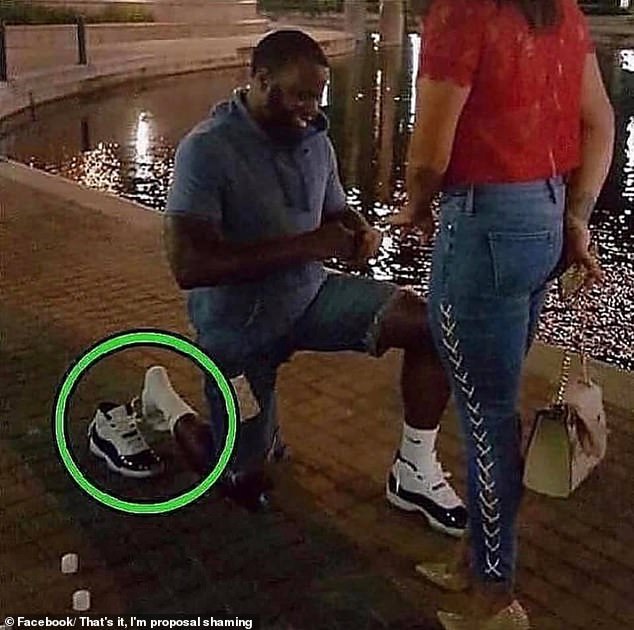 Hannah Legg who is believed to be from the UK, posted snaps of men removing their shoes during marriage proposals (pictured) on the Facebook group That’s It, I’m Proposal Shaming 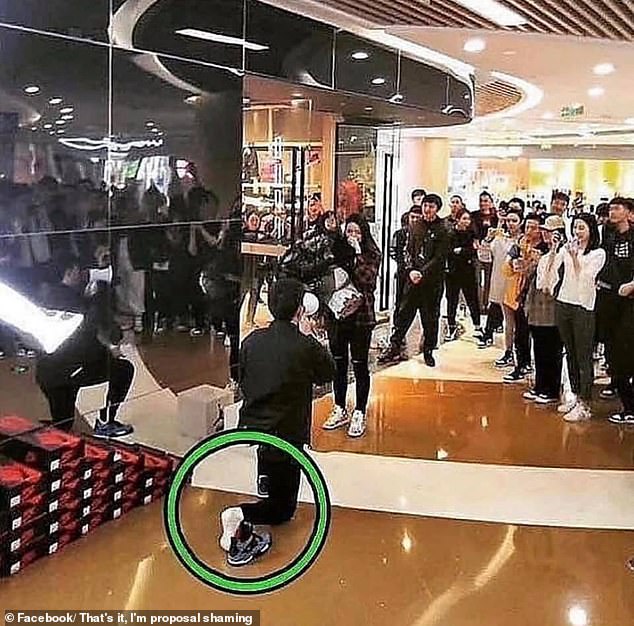 Posting the viral photos, Hannah wrote: ‘A meme page on Instagram posted these. Do men really do this? I mean, I understand ‘respecting the drip’ and not creasing your shoes but if you love your lady that much, shouldn’t you not care?’

Over 900 people commented on the post, with many responses arguing a man not wanting to ruin their belongings doesn’t mean they love their woman any less.

One person wrote: ‘I mean they are expensive shoes and to many people, their shoes are important to them. It wouldn’t bother me personally. I have nice things that I wouldn’t want to ruin.’

Amused, a third added: ‘When the trainers mean more to him than his chick. Jokes aside, I like the level of commitment.

‘It shows that these men take pride in themselves, for some (me included) that’s an attractive feature.’ 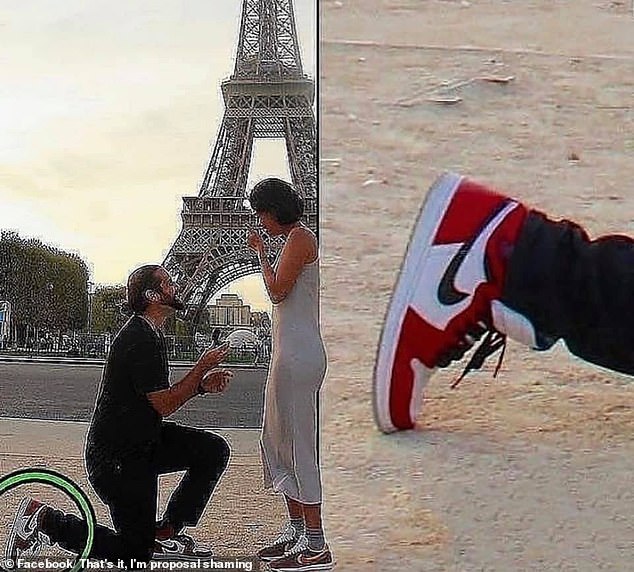 Others agreed with Hannah, as some admitted they wouldn’t accept a proposal from a man who is protective of creasing his trainers.

One person said: ‘I’ve bought shoes just as expensive as them trainers but if you’re not going to use them like there were made for, then put them in a glass case and just look at them. I like to wear my stuff, that’s a no for me here.’

‘I don’t understand how bending the sneaker for two minutes ‘ruins’ it anyway. It’s not like you’re going to resell them, so what does it matter,’ another said.

A third wrote: ‘I’d say no. Just wear a different pair of shoes. Those pics look ridiculous because of you.’

Another added: ‘I’m just not a fan of the materialism that’s connected to this – I get some people are like that – and that’s sound, do whatever makes you happy. But personally the thought of spending hundreds on a pair of shoes makes me cringe.’

How Instagram is cracking down on illegal drug sales

Jennifer Lopez and Alex Rodriguez: What Breakup?!? Look at This Revenue-Generating Selfie!