Snowflake Mountain contestant, 26, who thought the show would be a ‘Geordie Shore party’ only to be dumped at a tough wilderness retreat says EVERYONE should do it because she got such a reality check

A contestant from controversial reality show Snowflake Mountain says everyone should go through the experience – despite it being so gruelling.

Rae Hume, 26, and Liam Brown, 21, appeared on This Morning today to discuss their time on the Netflix programme.

They discussed how they applied for the show thinking it would be similar to Geordie Shore, and perhaps set in a villa, but their families knew the pampered contestants would be facing a tougher challenge.

However, instead they were dumped in the wilds of the Lake District, and had most of their luggage blown up, left with just a small bag of essentials, and given a series of tough tasks.

But despite this, Rae told This Morning hosts Alison Hammond and Dermot O’Leary that she ‘loved every second’. 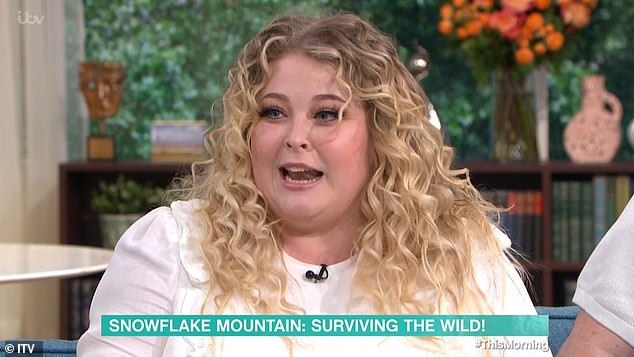 Rae Hume, 26, is one of the contestant on controversial Netflix reality show Snowflake Mountain. Despite how tough the show was, she said she loved every minute 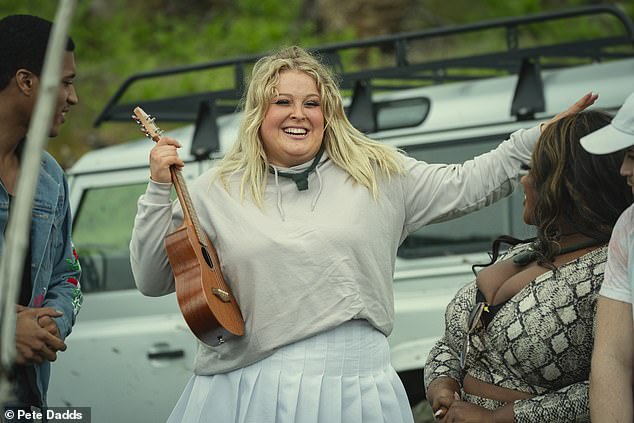 The positive 26-year-old enthusiastically embraced the experience, saying she wished it was something everyone could do

She added: ‘It was just one of those things I wish everyone could get the opportunity to go on, because we actually did such honest searching.

‘We thought we were going to a party Island, going to a villa, and we turned up, and we had to face reality instead of escaping it.’

Chipping in about his experience on the show, fellow contestant Liam Brown, 21 , added: ‘So I think we applied for what we thought would be a bit more like Geordie Shore-style party.’

He was given a form to fill out – which he admitted he had never done before – to share his guardian’s details. But unbeknownst to him, his close family already knew what he was in for.

In fact, all of the show’s ten 20-somethings contestants were involved because their own parents consider them ‘snowflakes’ — work-shy, over-sensitive, lacking in discipline, overly-dependent on their parents, unable to find the sink to wash a plate, never mind look after themselves.

And this was something Liam later discovered, laughingly telling the programme:  ‘[The show makers] had actually like organised it with [his guardian] behind the scenes, and it turns out that she agreed to sign me up to this horrific experience.’

He added: ‘When we first got there, we were all traumatised. You know, you look at yourself [thinking] “why am I here?”. 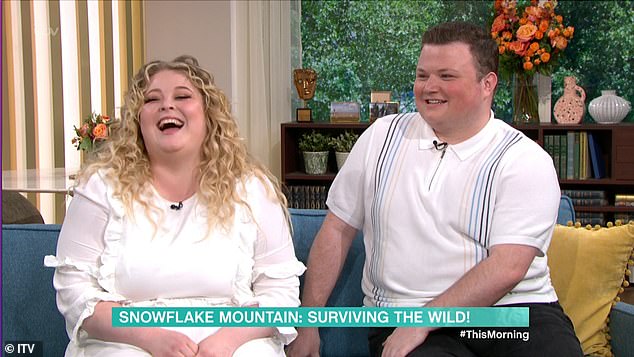 Rae Hume, 26, and Liam Brown, 21, appeared on This Morning today to discuss reality show Snowflake Mountain, which they both took part in 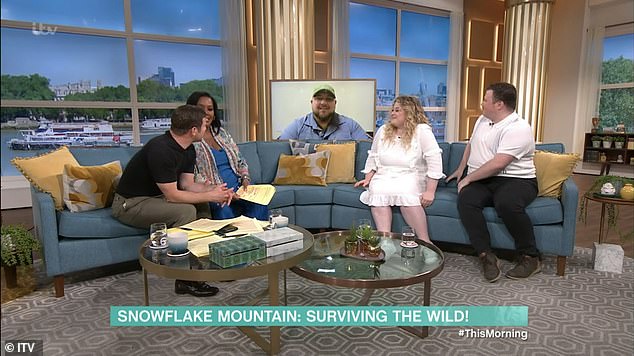 ‘And then you have a breakdown. It’s like a midlife crisis. And you realise why you’re there and then you just get on with it.’

During the segment, the hosts also spoke to Matt Tate, a military survival expert who guided the participants through their challenges.

He told Alison and Dermot that the programme was an ‘interesting’ experience, and while it had been tough to initially get the participants motivated, it ended well.

Speaking about Rae and Liam, he said: ‘From the beginning they were really strong characters.’ 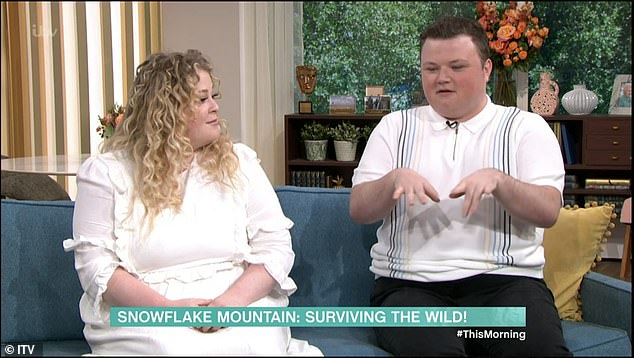 Rae Hume, 26, and Liam Brown, 21 both felt they learnt a lot from the experience, which they said forced them to stand on their own two feet

He added that Rae is very positive and Liam has a great sense of humour.

‘So they brought a lot of energy to the camp that was good,’ Matt said.

Speaking about what made the pair ‘snowflakes’ before the experience, he said: ‘Their outlook on life…their lack of willingness to go out and do things on their own.’

Liam added that the show had helped him to stand on his own two feet, saying: ‘I very heavily rely on like my parents or my Nana…And now [on the show] you’ve got no WiFi, no phones.

‘You’ve only got yourself to like fall back on. You’ve got no one you don’t know the people that you’re with.

Snowflake Mountain is available to watch on Netflix now.

The estranged husband of comic Louise Reay is suing her for £30,000

Toni Collette is superb in mother-daughter thriller Pieces of Her