Home » Lifestyle » So much for packing light! Leeds festival-goers arrive with huge bags

So much for packing light! Leeds festival-goers drag enormous bags through the fields as they arrive for the first day of the Bank Holiday festivities

The long journey from car park to campsite was not enough to put off revellers who arrived at Leeds Festival laden with enormous rucksacks and wheel-along cases.

Early birds were seen struggling as they dragged sleds piled high with camping essentials – and plenty of wardrobe choices – across the fields before pitching their tents on Thursday.

Performances at the twinned Reading and Leeds Festivals kick off tomorrow but hundreds have already descended on the sites to kickstart the Bank Holiday weekend antics in advance.

Short shorts and strappy tops were the order of the day for many, despite weather warnings that rain and cold temperatures are set to bring a crashing end to the hot and humid weather across Britain this weekend. 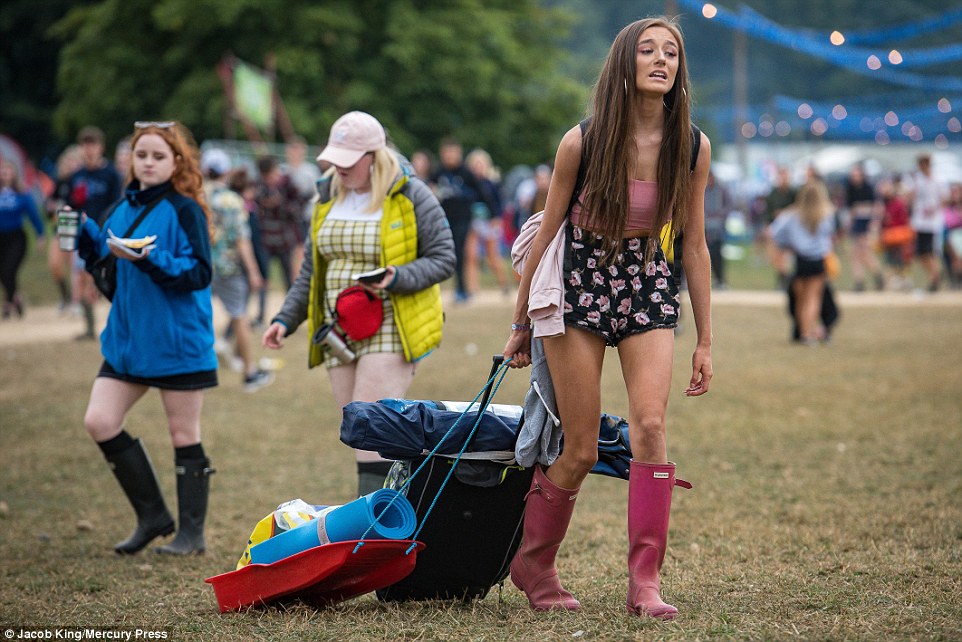 Need a hand? One festival-goer appeared to be struggling with her large bag as she arrived at Leeds Festival on Thursday Thinking ahead: Many revellers were seen dragging sleds piled high with essentials as they kicked off the fun in Leeds 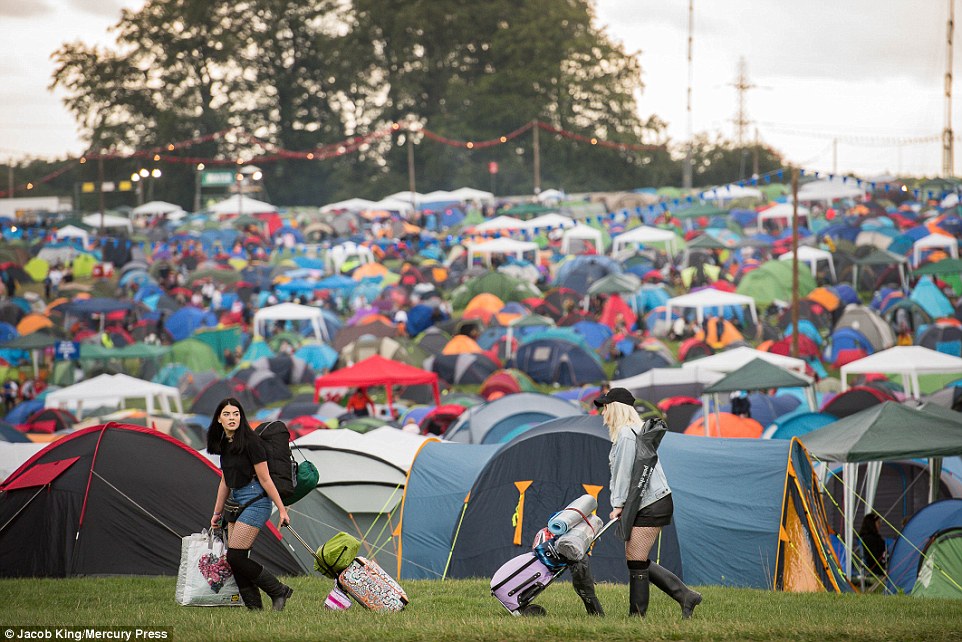 Ready to party: Hundreds of early birds have already set up camp in Leeds as they make the most of the Bank Holiday Bank Holiday fun: The main acts start tomorrow but food stalls and entertainment are already in full-swing at Leeds

Revellers at Reading festival may need to wear don their wellies as showers are forecast throughout the day, while Leeds ticket holders arrived under ominous grey clouds.

Hopefully festival-goers found room to pack a jacket as temperatures are set to dip below 50F on both sites tonight.

Suitcases on wheels proved a popular choice for many of the early arrivals as people looked to minimise the hassle of traipsing across the fields.

Photos from Leeds show hundreds of tents already set up after the first festival-goers arrived on site yesterday.

Fall Out Boy, Travis Scott, Kendrick Lamar and Panic! At The Disco are among the acts who will take to the stages this weekend. 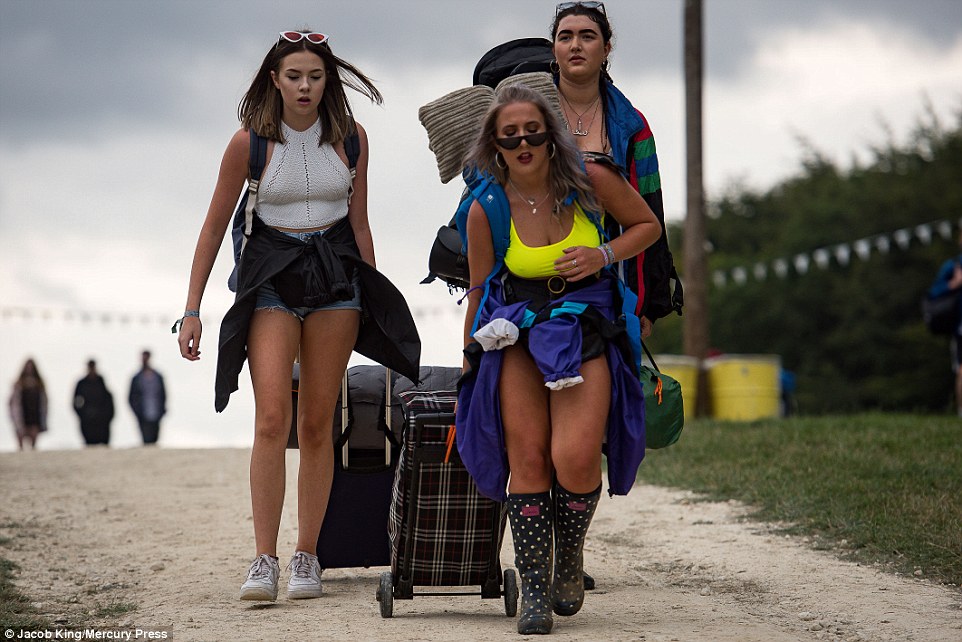 Girl gang: These women came prepared with raincoats tied around their waists as they dragged their suitcases in Leeds 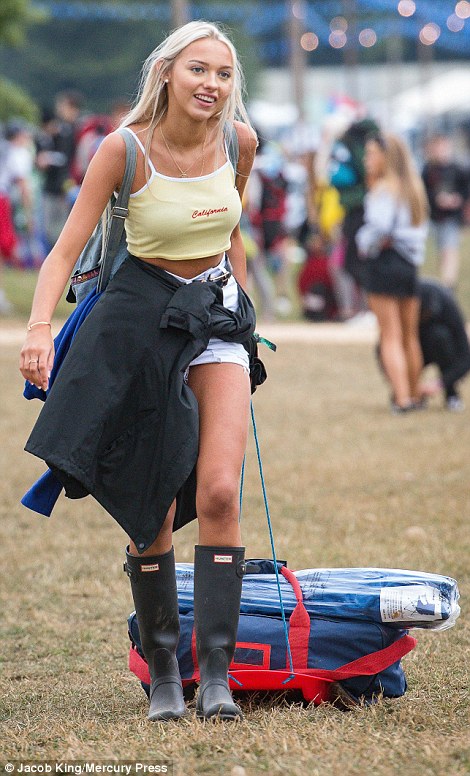 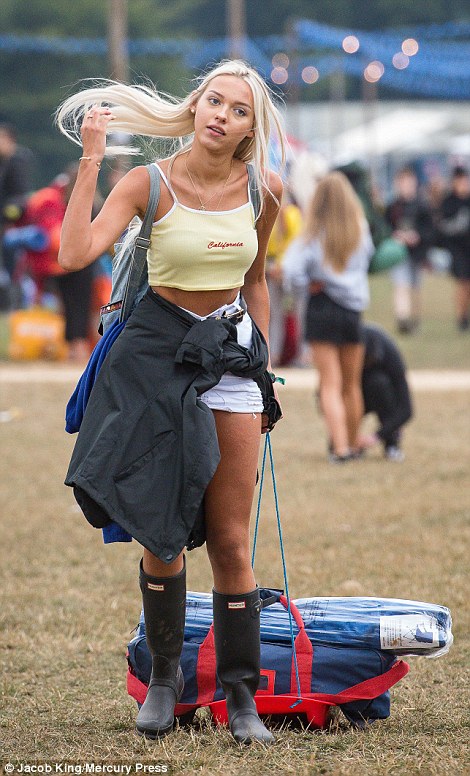 Keeping cool: This festival-goer flicked her hair out of the way as she dragged a new camping chair towards the Leeds site 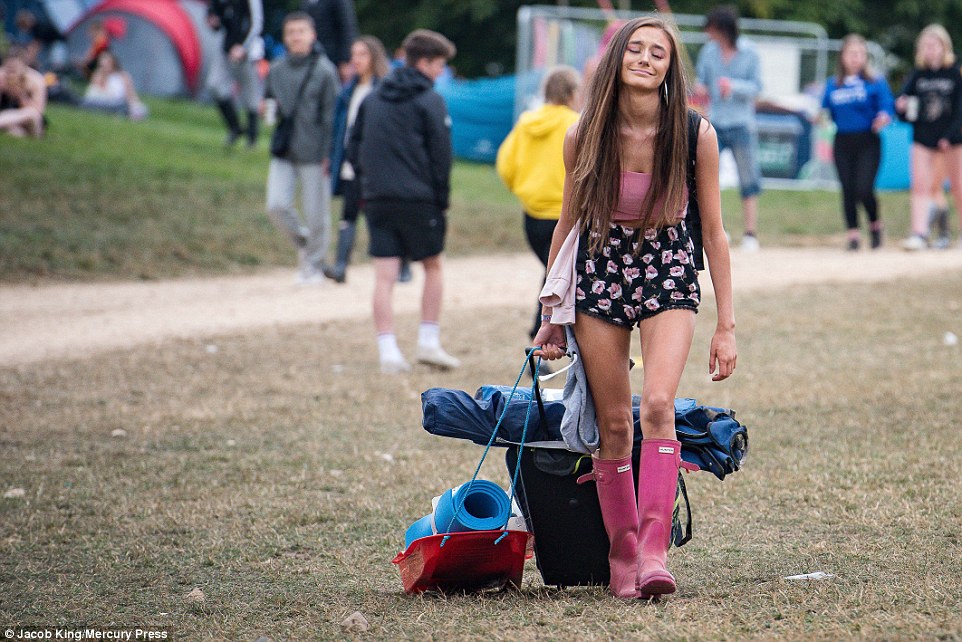 Help! This music fan looked utterly exhausted after pulling her packed suitcase and sled across the large fields at Leeds

One of the biggest music festivals, Reading & Leeds has seen the likes of Eminem, Rolling Stones, Blur, Nirvana, Oasis and Radiohead play their main stages.

Reading Festival has the honour of being the oldest popular music festival still in existence, having first started back in 1961 as the National Jazz Festival.

Over time the festival expanded to include a Leeds site, all the while moving away from its jazz roots to embrace Rock, featuring stars such as Pink Floyd, Black Sabbath and Thin Lizzy.

The festival has become a highlight of the August Bank Holiday weekend, taking place from Friday 23 August to Sunday 25 August. 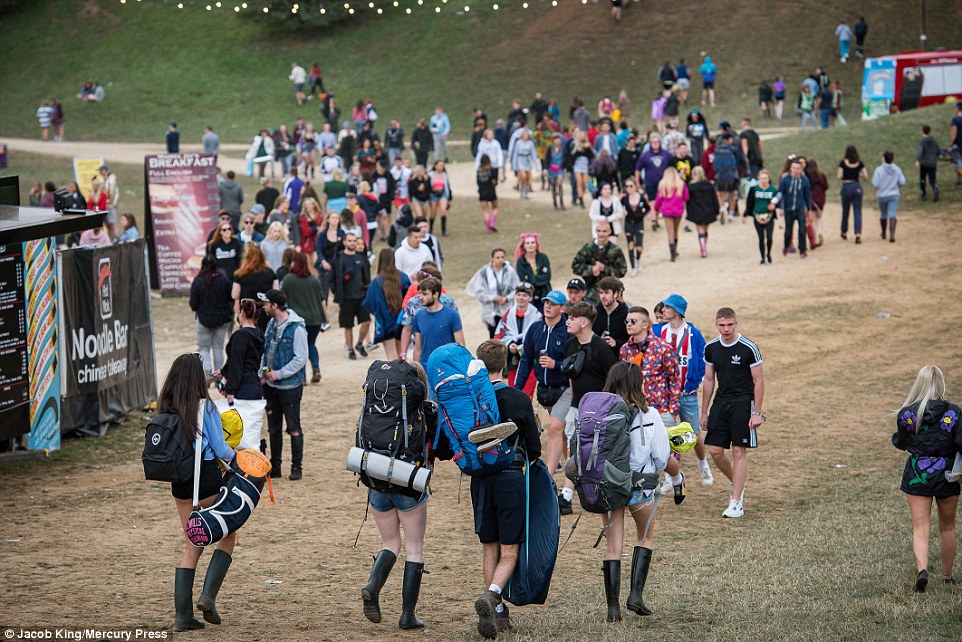 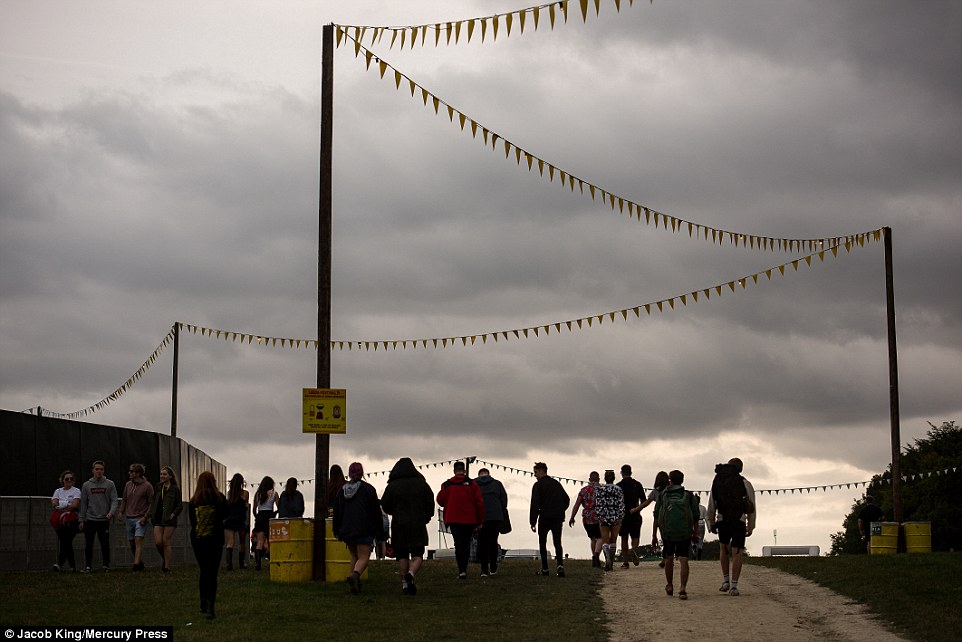 Rain on the way: Showers are forecast to hit the site on Sunday. Pictured, festival-goers at Leeds on Thursday morning Roll up, roll up! A big top towers over festival-goers making their way to the campsites at Leeds festival on Thursday

The Bank Holiday weekend’s best weather is expected to be on Saturday, when sunny spells will break out across the country but temperatures will remain roughly the same as Friday.

But the Met Office warns the weather will still be hit-and-miss, with showers expected to interrupt the brief sunny spots.

And in the evening heading into Sunday frost is expected form on grass throughout Great Britain as Leeds Festival experiences its coldest night. 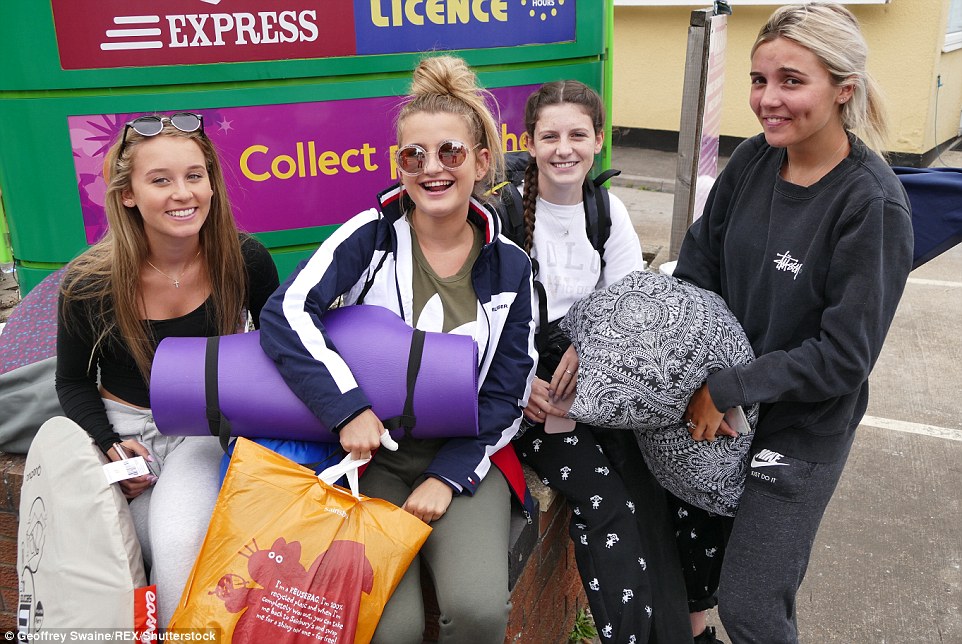 Twinned festival-goers: A group of friends arrived at Reading Festival on Wednesday as they made the most of the weekend 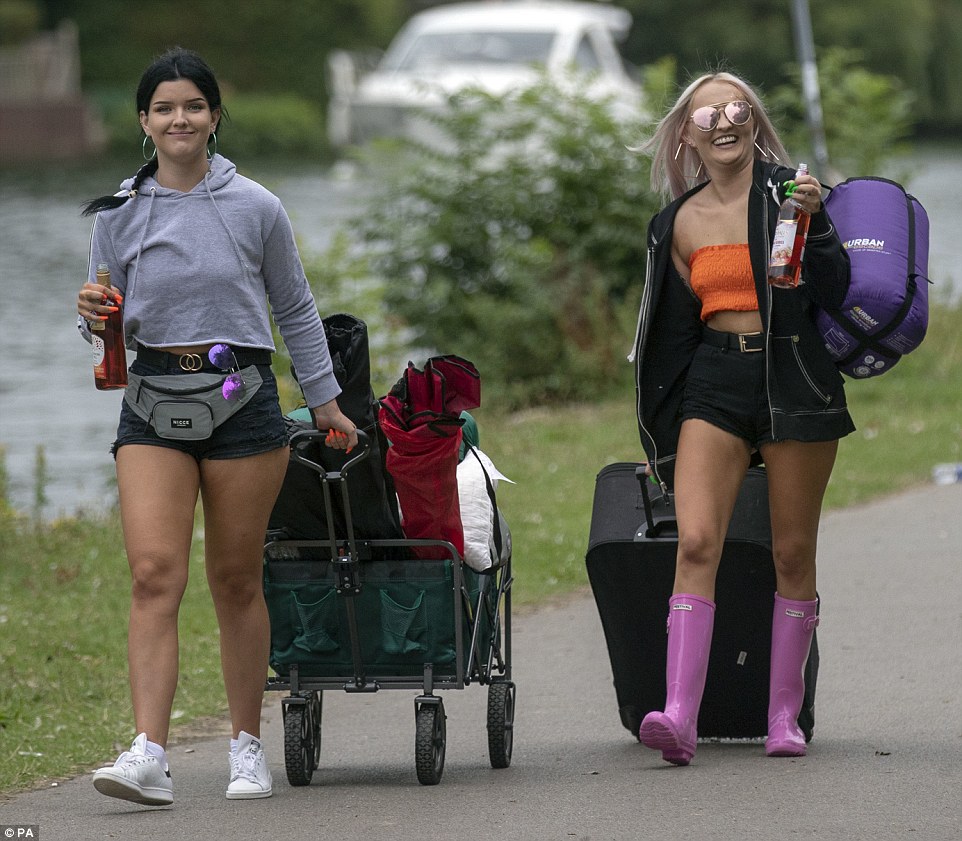 Carefully planned: Bottles of win in hand, two women make their way along the towpath towards Reading Festival yesterday 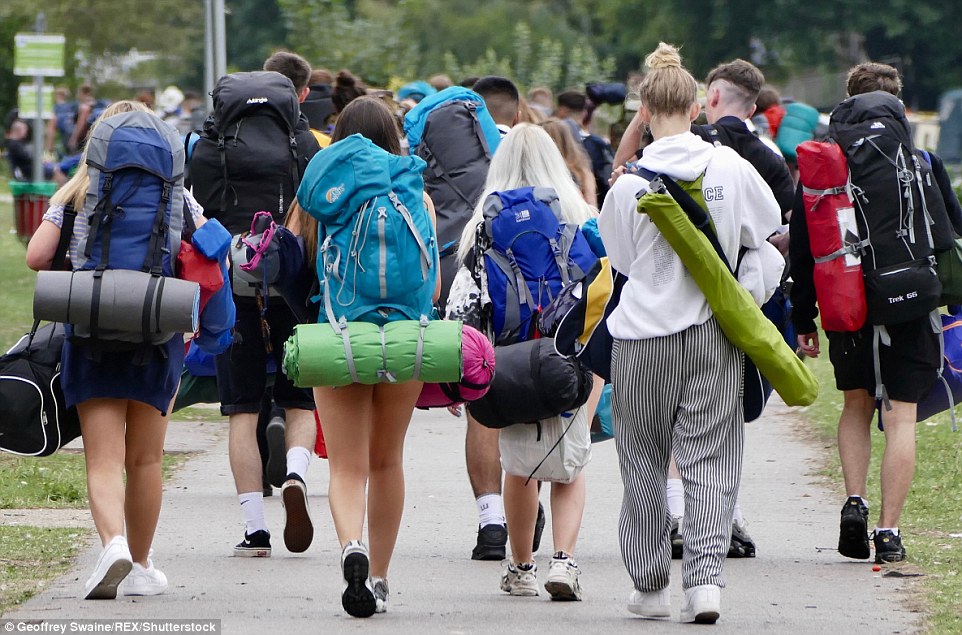 EU to pursue web tax plan alone if no global accord: Gentiloni