A lesson in style! Sophie Wessex is fabulous in florals as she attends Royal Agricultural Society Show’s Education Day in Cowes

After her visit to the Chelsea Flower show in London yesterday, Sophie Wessex was obviously inspired to continue to floral them as she visited Cowes this morning.

The Countess, 57, joined Prince Edward, 58, on the Isle of Wight for the Royal Agricultural Society Show’s ‘Education Day, which is organised yearly for local schoolchildren.

The mother-of-two was greeted by pupils from the local school who presented her with flowers when she arrived.

For her day in Cowes, Sophie donned a tiered blue floral skirt with a white blazer and a top.

Sophie Wessex, 57, was met by crowds of schoolchildren as she visited Cowes on the Isle of Wight for the Royal Agricultural Society Show’s ‘Education Day today

She paired it with a double-breasted white blazer with off-white buttons over a white t-shirt.

She picked a sensible pair of white espadrilles, and completed the look with a leather clutch bag.

Her blonde locks were styled in a neat do, with romantic curls cascading down her shoulders and the rest of her hair swooped to the back of her head with a tie. 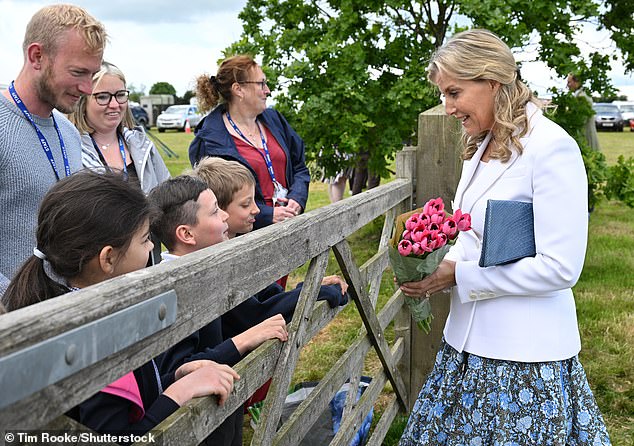 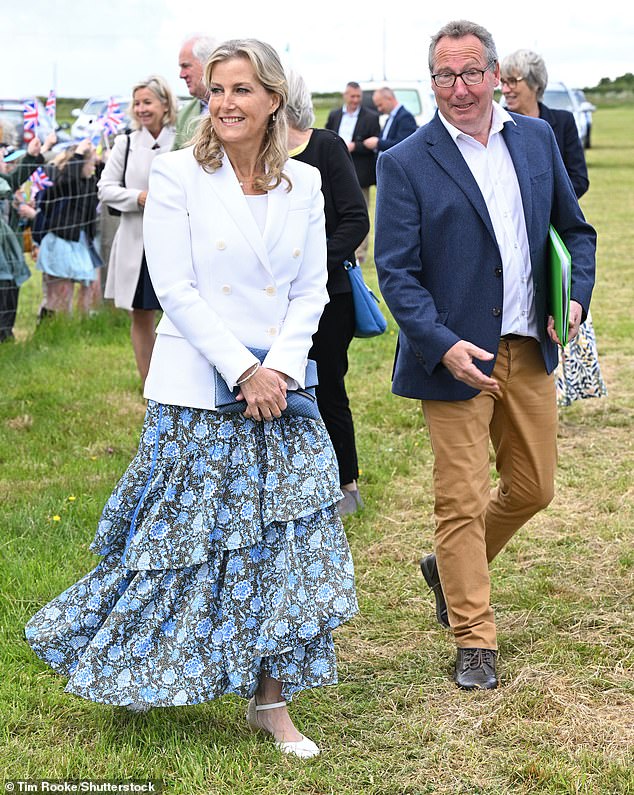 Sophie, wearing a floral skirt and a white blazer, picked sensible heels to tour the grounds of the Royal Agricultural Society Show

She accessorised with a discreet gold necklace with a diamond pendant, diamond earrings and white and gold bracelets.

Sophie sported a natural makeup today, with a dash of mascara and eyeliner and a pink lip.

She was greeted by a group of young fans who offered her a bunch of pink tulips that she graciously accepted, before moving on to the rest of the visit. 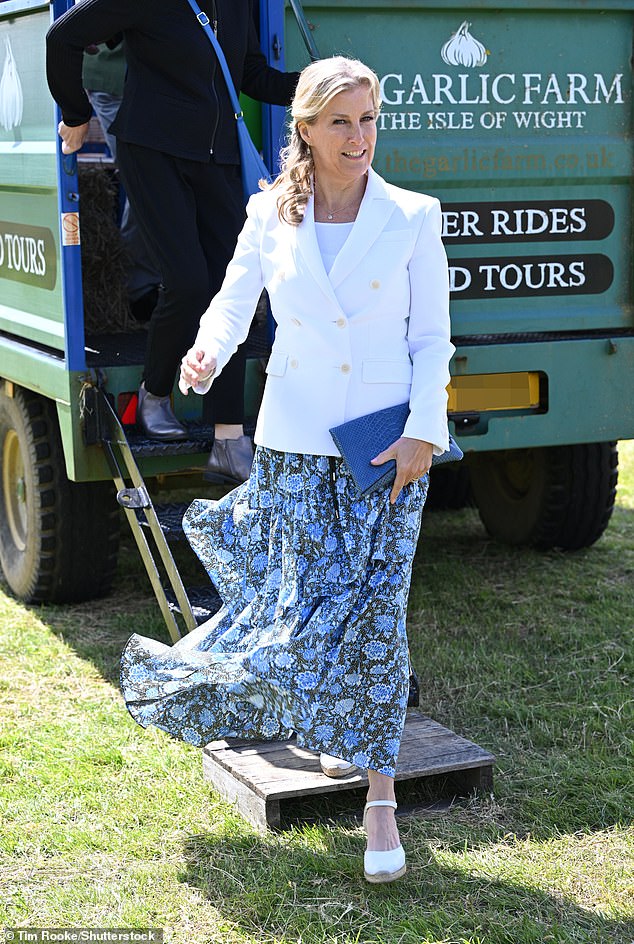 The Countess looked very stylish in the blue floral skirt and white blazer, which she paired with a leather clutch 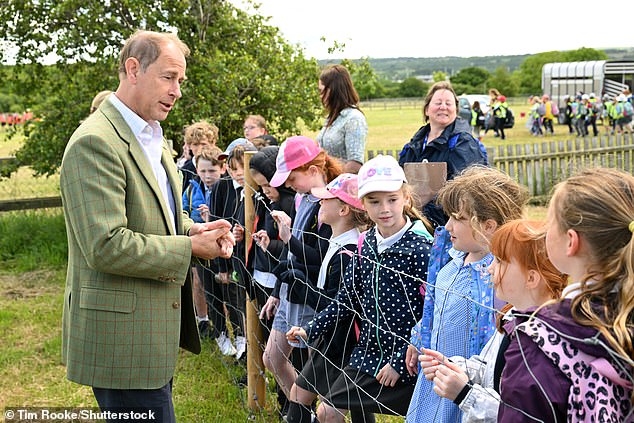 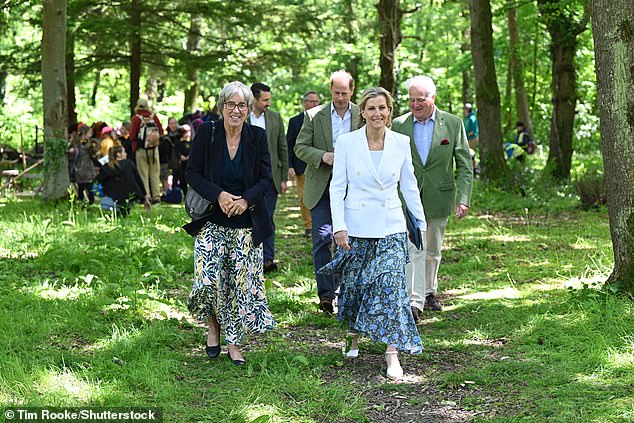 During her visit today, Sophie will join Prince Edward, 58, for a series of engagements.

The couple will visit the Pan Estate in Newport, as well as its Community Centre and the Barnados Family Centre, alongside Barton Primary School.

They are also set to visit the Independent Arts and South West Area Youth, before ending the day by helping with preparations to celebrate The Queen’s Platinum Jubilee in at Columbus House in Shanklin.

Sophie and Edward’s week is off to a busy start. Yesterday, they toured the Chelsea Flower Show in London with the Queen, 96. 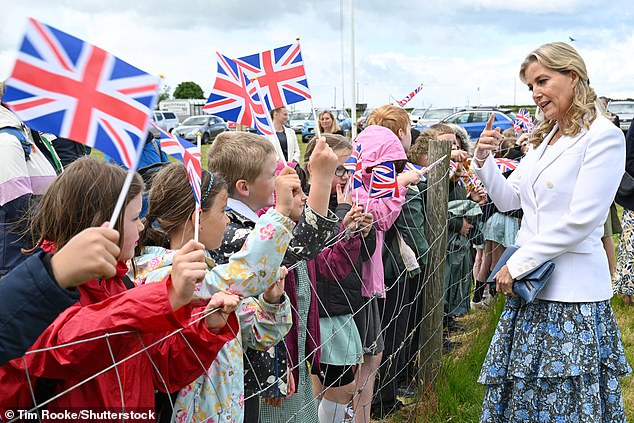 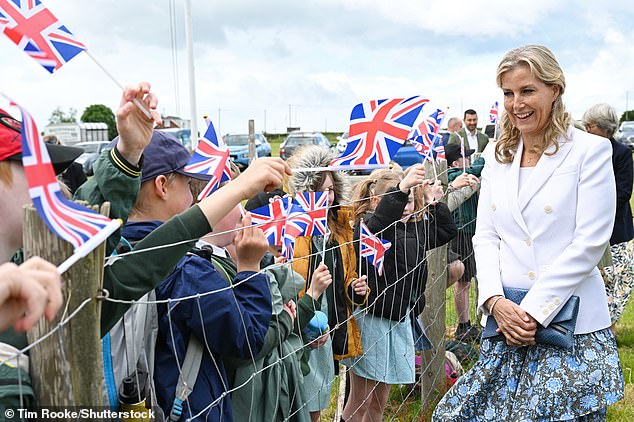 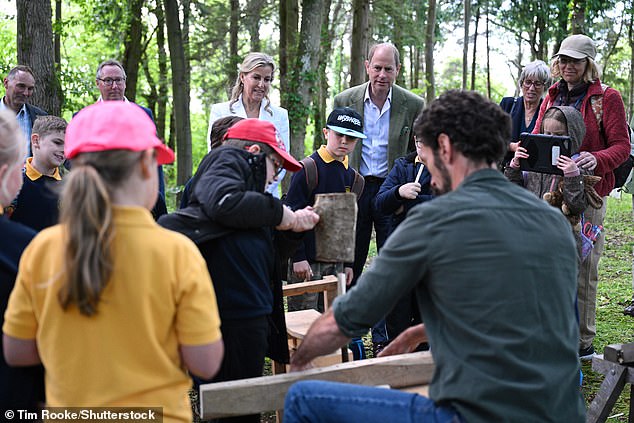 Sophie sported a pale pastel trouser suit as she visited the event, pairing her ensemble with brown wedges and a matching handbag.

The mother-of-two and the Earl were taken on a tour and introduced to artists and designers at the annual event in the Royal Hospital Chelsea, which showcases the best garden creations and is this year focusing on the theme of calm and mindfulness.

Both were photographed crouching down to get a closer look at ‘The Cirrus Garden’ by designer Jason Williams.

They also appeared to be sharing a joke as they laughed together while looking at one of the designs, grinning from ear to ear.

And they were snapped listening intently during their visit to the flower show.

It comes as the Queen, who is Patron of the Royal Horticultural Society, made a visit  to see the displays which celebrate her Platinum Jubilee. 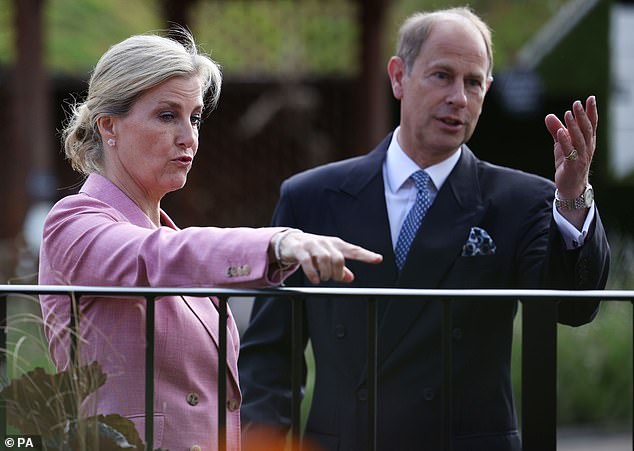 The mother-of-two and her husband, pictured,  were animated as they looked at one of the exhibitions during their visit to the flower show today

Where Is the Cast of Parks and Recreation Now?