Home » Lifestyle » Sorry, but the president has breakup hair 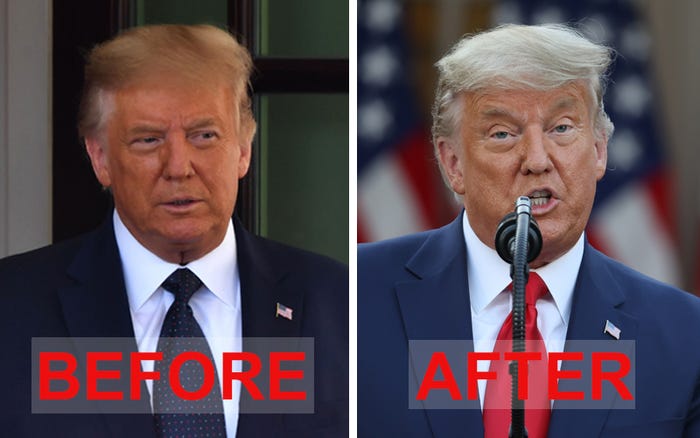 Breaking up is hard to do, and perhaps nobody knows that better than Donald Trump. For nearly two weeks, as it's become clearer and clearer he's lost the presidential election, Trump's been circling stage one in the Kübler-Ross model of grief: Denial.

Elizabeth Kübler-Ross developed her five-stage grief model while writing "On Death and Dying," arguing that grieving will take you through denial, anger, bargaining, and depression before allowing you to finally accept the loss. Kübler-Ross originally developed the model with the death of a loved one in mind. But it's not hard to see how Trump's been applying it to the end of his presidency.

His denial has manifested in nearly two dozen court cases challenging the election (almost all of which he's lost), in all-caps tweets reminding people that he "concedes NOTHING," and with poorly planned press conferences at Four Seasons Total Landscaping.

But Trump's hair tells us a different story. Since the election, his reddish-blonde mane has faded into a cloud of wispy whiteness. Trump is giving us breakup hair.

As anyone who's gone through an embarrassing, heart-wrenching breakup will tell you, it is not unlike losing the presidency (probably).  Changing your haircut or color is a way of taking back ownership over yourself and your feelings. It's a physical demarcation between Old You and New You.

Trump, at 74, has managed to hold on to his hair color — and his hair — much longer than most men his age. His hair itself is something of an engineering feat and its staying power (and frankly, attachment to his head) has been a longtime mystery. In 2016, Gawker published a 3,500 word exposé on its machinations, claiming that a hair clinic housed in Trump Tower was responsible for his locks. In 2018, author Michael Wolff claimed Trump's pate was a combination of a draconian skin stretching procedure called a "scalp rotation" and over the counter hair dye (Just for Men, if you're wondering).

The creamsicle-shaded hair is as synonymous with Trump as "Build the Wall" and "You're fired" and "Sad!" And while other presidents, like Obama and Clinton, also went gray at the end of their terms, this change seems more sudden and specific. According to Wolff's book, the particular shade of orange Trump sports is dependent on how long he can stand to keep the dye on his head — which is why his hair sometimes fluctuated between flesh-toned and forest fire.

Trump has never been known as a patient guy, so perhaps it's no surprise that in the midst of a contentious post-election legal battle and flailing pandemic response, and facing a series of post-presidency lawsuits, hair care has fallen off his to-do list. Trump is a famously vain man — he reportedly had the White House replace its energy-saving bulbs with incandescent lights because he thought his hair looked better under it. Trump took $70,000 in legally questionable hair care-related tax deductions while starring on "The Apprentice."

And yet, what if Trump's breakup hair is actually telling us he's ready to move on? Despite continuing to hold rallies for his supporters and publicly claiming the election was stolen, his follicles may be quietly whispering what the man himself cannot say:

7 Movies You Totally Forgot Rihanna Was In

Are Prince George and Princess Charlotte Still Homeschooling During Their School Break?

Alex Salmond lashes out at Nicola Sturgeon for 'astonishing' attacks