A tense international stalemate in the world of chess could end with the first American world champion since Bobby Fischer in 1972. Fabiano Caruana, who was born in Miami and raised in Brooklyn, is taking on Magnus Carlsen of Norway – a man who has dominated the game and been the undisputed, untouchable world champion for five years. The match is tied after 12 games and is headed for a winner-take-all playoff.

Only then can the current world champ, 27-year-old Norwegian Magnus Carlsen, enter the field of play. He’s followed by the challenger, 26-year-old Fabiano Caruana, who could be the first American to win a world title since the days when chess was less a sport and more a proxy-war between superpowers, when Brooklyn’s Bobby Fischer – considered brilliant, if famously eccentric – challenged and beat the Kremlin’s darling, Boris Spassky, in 1972. 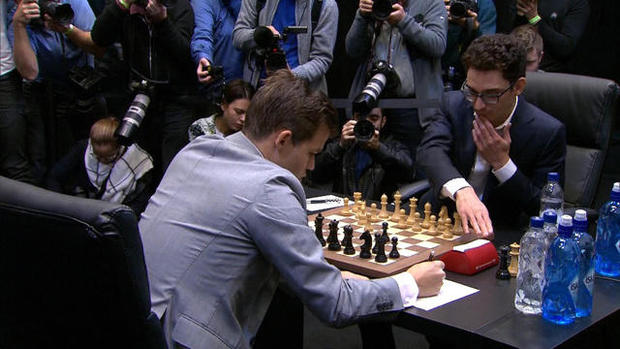 There’s less saber-rattling this time, according to two of Caruana’s pals who’ve come over to support him.

“Fischer-Spassky, it was so easy for this to be like, ‘Oh, look, this is an allegory for the Cold War.’ It’s like, it’s – who has the smartest people, who has the biggest bombs?” friend Josh Abady said. “Magnus is just a nice Norwegian guy. … I mean, who really has problems with Norway?”

Caruana has a problem with Norway, that’s who. The American challenger has managed to tie Carlsen through 12 games, but not beat him. This match may not be about Cold War politics, but in at this level of competition, world chess is more than just a game, especially if you win.

Caruana’s success has even produced a Fabby Fan club.

“Chess is cool with nerds. It’s a great game, and apparently being a nerd is cool,” Caruana’s friend, Josh Bass, said.

Being a winning nerd would be even cooler. The match now goes to the equivalent of sudden-death overtime for you sports fans. A series of speed chess games – just a few seconds for each move. One way or another we’ll have a new champion, or the same old champion, Wednesday.

Middle East on the brink: US’ ‘act of terrorism’ was ‘rogue adventurism’ – Iran to Trump

Amazon's Warehouse Changes Could Mean Delayed Orders For Some Shoppers

Alex Jones: The One Show host apologises to co-star after awkward moment ‘I feel bad now’