Employees are unlikely to strike over coronavirus health concerns despite demands rising from unions and business groups for the federal government to provide free rapid tests amid a workforce crisis as one million Australians isolate.

After an emergency meeting of 30 unions on Monday, Australian Council of Trade Unions secretary Sally McManus has denied there are any plans for workers to walk off the job in protest as the Omicron outbreak surges and supply chain issues leave businesses struggling. 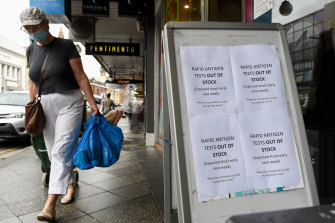 Ensuring workers can be tested is a growing headache for employers.Credit:Bianca De Marchi

Instead, she said the vast majority of businesses were doing the right thing and were aligned with their staff on the need for more testing and a review of workplace safety. Legal experts warn widespread strike action could be considered unlawful.

“We’re not wanting [strikes]. We’re just telling people what their rights are,” Ms McManus said. “It’s simply the fact that workers have a right to cease work if there’s imminent danger to their health.”

The Australian Council of Trade Unions, Ai Group, Australian Chamber of Commerce and Industry and Council of Small Business Organisations of Australia want the federal government to make rapid antigen tests free of charge for businesses and their workers. However, it is not clear who is legally responsible to pay for rapid antigen tests – currently in short supply – as the nation moves towards living with COVID-19.

The ACTU has requested businesses undertake a new risk assessment due to the Omicron variant and to pay for and provide RATs to employees when they become available.

Ms McManus said she was “focused absolutely on people working” and it was a “very small percentage” of businesses doing the wrong thing.

“Half of some workforces are sick at the moment, it’s a total crisis. We want people to be at work absolutely, we also want to keep people safe and businesses open,” she said.

“So we’re actually working towards keeping the economy going … we’re simply saying to employers you can’t just go on like you were prior to Christmas because Omicron is here and it’s different.”

Commonwealth Bank analysts estimate one million people across the country are isolating due to either contracting COVID-19 or being a close contact. CommSec senior economist Ryan Felsman said it was having a huge impact on the nation’s economy, labour force and supply chains.

“A lack of workers has strained supply chains, particularly in the food sector, with shelves threadbare in some supermarkets,” he said. “Of course, infected workers have little choice but to stay at home.”

“It seems they would rather that they stay at home indefinitely,” she said.

She said the government was working with all stakeholders including the unions to ensure people can return to work safely and criticised the unions for playing “politics with health policy”.

“This shameless attempt by union leaders to pretend they have not had the chance to work with the federal government is a charade,” she said.

Ms McManus said it was “disappointing” the government was trying to score political points during the crisis, particularly when businesses and the unions are aligned on the need for free and accessible rapid tests.

Ai Group chief executive Innes Willox said governments were changing the requirements “almost daily” for rapid testing of staff and the government should provide support to businesses to purchase the tests.

“The lack of availability of the rapid tests and high costs currently involved will potentially see greater numbers again turning to more expensive but freely provided PCR tests which makes no sense given the prolonged disruption they cause waiting for results,” he said.

Australian Chamber of Commerce and Industry chief executive Andrew McKellar also said his organisation had been calling for free and widely available tests since September.

“Rapid antigen testing is an important tool as part of a broader arsenal … in ensuring employees can safely return to the workplace,” he said.

“It’s not too late for national cabinet to change its mind and provide free and accessible rapid antigen testing for small businesses across all states,” he said.

Business Council of Australia president Tim Reed said when rapid testing was required by governments there needed to be a proper supply and potentially better tax treatment of the tests or targeted government support. He previously said he was supportive of national cabinet’s decision not to make them totally free.

“Rapid tests are a critical tool but they aren’t a silver bullet, that’s why businesses are putting in place COVID safe plans, innovative team models and best practice procedures to keep workers, suppliers and customers safe,” he said.

University of Adelaide law professor Andrew Stewart said employers had an obligation to do everything reasonably practicable to provide a safe workplace, but this didn’t automatically mean the provision of masks and rapid tests was their responsibility.

Without enough tests available, he said employers could not reasonably be expected to provide them.

“The argument could be made that if tests aren’t available, even though that’s not the fault of employers, they may need … to shut down workplaces until tests are available,” he said.

However, he said any organised walk out from work was likely to be unlawful unless there is an “immediate threat” to each specific worker’s health.

Leading industrial law barrister Ian Neil SC said the debate about who should provide the tests was entirely theoretical until enough supply was available.

“There’s a very strong argument … that they’re the very type of thing the government should provide free of charge to everyone free of charge, not just employers or employees.”

New iPhone 13 is here! This Apple offer lets you use one for FREE

Danniella Westbrook's new toyboy, 29, revealed as 'love rat who boasted about bedding hundreds of women' and he vows to MARRY her