Survivor is back and longtime host Jeff Probst is giving Us Weekly the goods on what fans can expect from season 37, dubbed “David vs. Goliath.”

In addition to the interesting choice for tribe division, the CBS series is introducing a game-changing new twist when it comes to idols — an idol nullifier — which played effectively, can completely cancel out someone’s strategic idol play at tribal council.

Check out more of what Probst told Us:

Us Weekly: How long have you been kicking around the idea of David v. Goliath? Why go with it now?

Jeff Probst: We hadn’t ever officially kicked it around, although as a fan of Malcolm Gladwell it was definitely in the Rolodex of ideas. The idea came during casting as our casting director, Lynne Spillman, started showing us people. It wasn’t by design, but we saw a bunch of successful, attractive, physically fit, well-educated people and they all had one thing in common – they came from some sort of advantage and they were used to winning. In fact, they expected to win. Then we noticed we had another group of people, that due to their early beginnings, had been forced to battle for everything and despite the success they had achieved, they saw themselves as the underdogs. Once we saw a clear division it was a pretty fast decision.

Us: These tribes are not divided based on the mentally strong versus the physically strong. How did the idea evolve into what we see on each tribe, which is rather diverse groups? Did this affect how you planned out the challenges?

JP: The biggest commitment was being true to the division of the tribes and not get stuck trying to balance the tribes in terms of strength or weakness. It’s very clear in episode 1 that we loaded the Goliaths with the clear physical advantage. But what keeps Survivor interesting is the unknown. You don’t know what the advantage is until you know the situation. So you never know what skills will come in handy. Sometimes being big and strong is an advantage, sometimes it’s not. That’s the experiment this season. Which group will be best at capitalizing on every advantage? 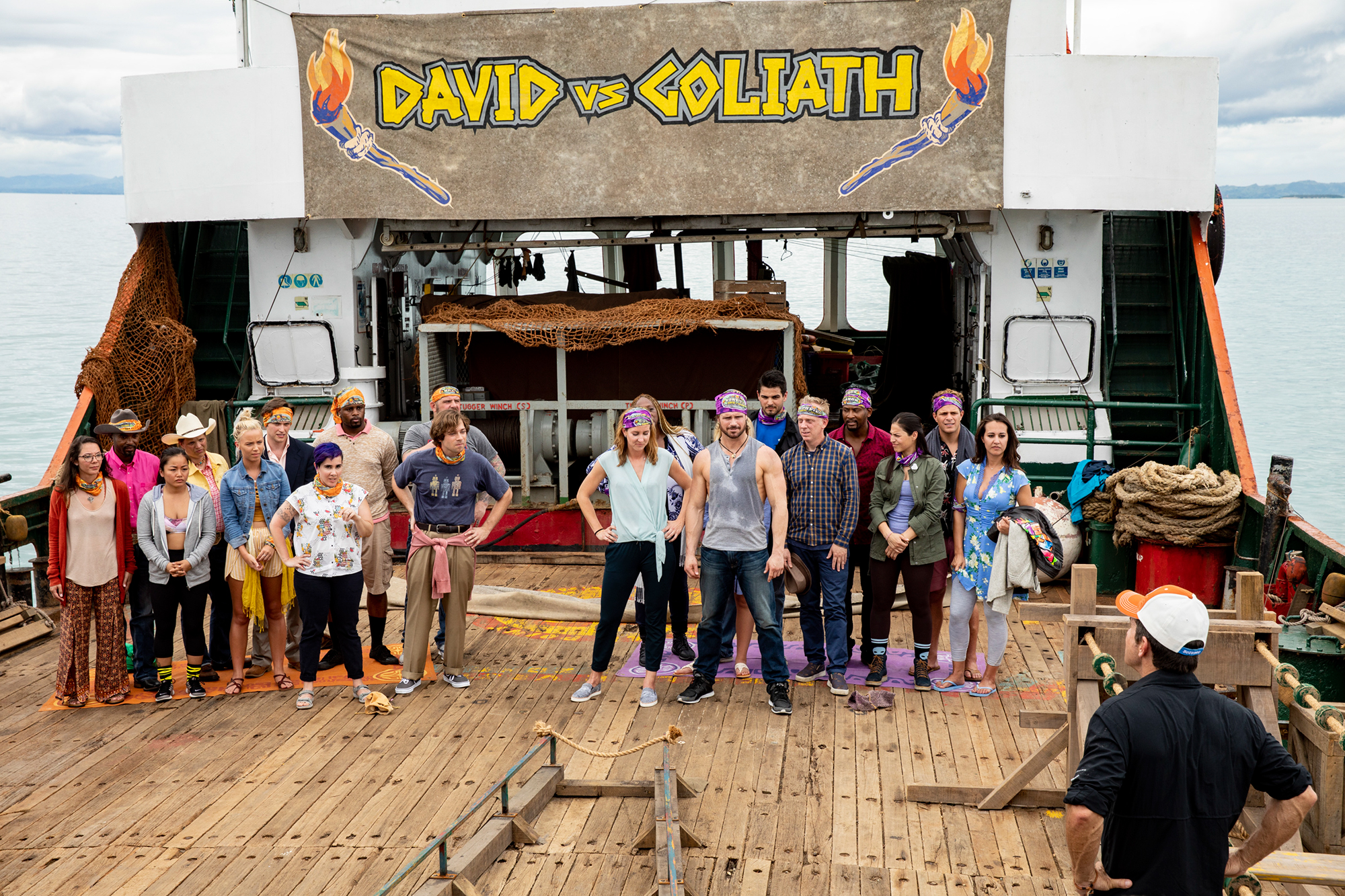 Us: How long has actor/director Mike White been trying to get on the show? Did you see his two appearances on The Amazing Race prior to casting him? Was there anything about him that surprised you?

JP: I’ve known Mike for a few years and whenever we would run into each other he would bring up Survivor and talk about how he wanted to play. I never really took him seriously and honestly, as I told him, I worried it would be more than he bargained for, and given his success in life, once he saw how difficult it was, he would find a way to get himself voted out. But I saw him a few months before this season and something was different. He had a focus that I had never seen before. We brought him in to meet CBS and it was clear he was ready to sacrifice whatever was required to get a shot at this adventure, so we took a shot on him. I’m really glad we did. He showed up ready to play and he gives 100 percent every day he’s there, which is all you can ever ask of someone.

Us: We see players have to battle the extreme elements again. Do you prepare the players any differently now knowing it’s always cyclone season while filming in Fiji?

JP: I can’t go into the specifics. Well, I could but that would spoil the fun! Yes, we had another season of very tough weather, especially early on. It is one of the most invigorating and nerve-racking parts of producing the show. We worry constantly about their well-being, but we never want to rob them of the full experience. It’s a tight rope that we walk with a lot of consideration. There isn’t anything you can do to prepare someone for being on a beach and being absolutely pummeled by a storm. There is nowhere to hide. It’s just you and your constitution. But at this point in our history, players should know that the show is real, the adventure is not pretend. Weather does hit and when it does it can be brutal. That’s part of the show as it forces you to keep your wits even during very difficult circumstances.

Us: Tell us about the new advantage: the idol nullifier. How does it work and why introduce it at this point in the Survivor run?

JP: The idol nullifier is something we’ve considered putting into the show for a few years and this just seemed like the right time. The idol nullifier has the power to block an immunity idol. But you must make your decision about who to play the nullifier against before anyone actually plays an idol. So information is key, because you need to be certain an idol is being played and for whom. But if you guess right, it’s a devastating blow that can flip the game on its head.

Us: Anything else you can tease about this season?

JP: I wish I had a very specific moment I was comfortable sharing, but at the risk of sounding generic, I really think we have assembled another amazing group of players. Lynne Spillman, our casting director, found 20 absolutely entertaining people and I think our fans are really going to enjoy this season.

For the latest TV news and interviews, subscribe to our new podcast “Watch With Us” below!

Three-bedroom house in Leeds on sale for just £125,000 but the previous owner is BURIED in the back garden