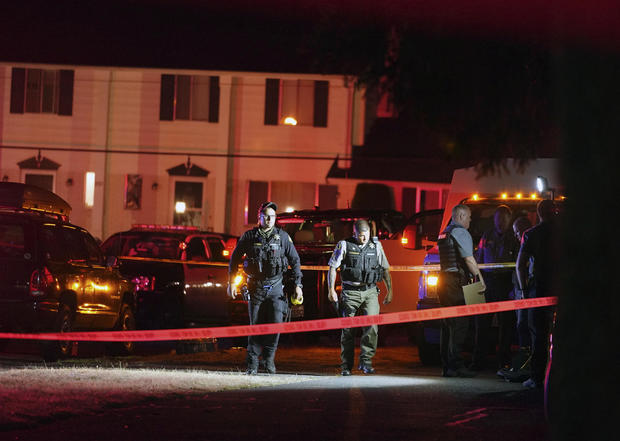 A man suspected of fatally shooting a supporter of a right-wing group in Portland, Oregon, last week was killed Thursday as investigators moved in to arrest him, the U.S. Marshals Service has confirmed. Michael Forest Reinoehl, 48, was killed as a federal task force attempted to apprehend him in the area of Olympia, Washington.

A statement from the Marshals Service confirmed that Reinoehl was wanted as a prime suspect in the killing of 39-year-old Aaron “Jay” Danielson, who was shot in the chest Saturday night, and was the subject of an arrest warrant issued by Portland police.

Federal agents from the FBI and the Marshals Service located Reinoehl on Thursday after the warrant was issued.

During the encounter, Reinoehl was shot by a law enforcement officer working on the federal task force, but the officer who opened fire was not a federal agent, one official told CBS News’ Clare Hymes. It was not immediately clear which law enforcement agency the task force member who shot Reinoehl came from.

“The fugitive task force located Reinoehl in Olympia and attempted to peacefully arrest him,” the U.S. Marshals Service said. “Initial reports indicate the suspect produced a firearm, threatening the lives of law enforcement officers. Task force members responded to the threat and struck the suspect who was pronounced dead at the scene.”

The statement said no law enforcement officers were injured during the incident.

Reinoehl had described himself in a social media post as “100% ANTIFA,” suggested the tactics of counter-protesters amounted to “warfare,” and had been shot at one protest and cited for having a gun at another.

He had been a regular presence at anti-racism demonstrations in Portland, which continued late into Thursday evening for a 99th consecutive day. 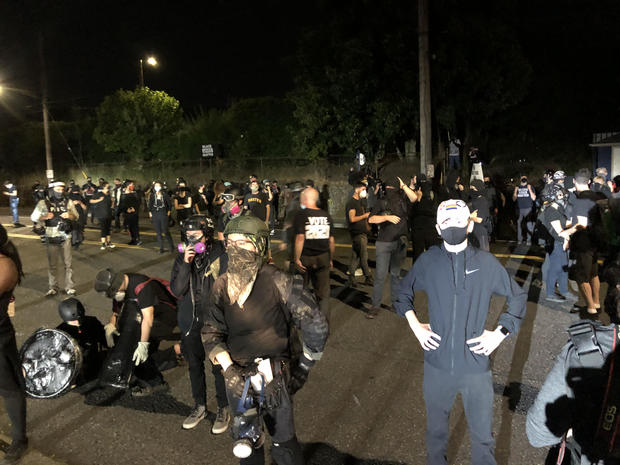 CBS News producer T. Sean Herbert said that after word of Reinoehl’s death spread among the demonstrators, a group of about 150 marched from Laurelhurst Park to a former police precinct building east of central Portland on Thursday night. The demonstration remained peaceful as police officers took positions away from the protesters to defend the building’s entrances.

In a tweet late Thursday night, President Donald Trump demanded to know, “why aren’t the Portland Police ARRESTING the cold blooded killer of Aaron ‘Jay’ Danielson? Do your job, and do it fast. Everybody knows who this thug is. No wonder Portland is going to hell!”

Why aren’t the Portland Police ARRESTING the cold blooded killer of Aaron “Jay” Danielson. Do your job, and do it fast. Everybody knows who this thug is. No wonder Portland is going to hell! @TheJusticeDept @FBI

It was unclear whether Mr. Trump was aware of the operation that took place in Lacey to apprehend Reinoehl. His suggestion that Portland was “going to hell” due to a lack of law enforcement action came two days after he ordered the Office of Budget Management and U.S. Attorney General William Barr to identify “anarchist” cities and cut their federal funding.

Portland was among several cities singled out by Mr. Trump, where he said “weak” Democratic leaders were allowing “anarchists” to “harm people, burn buildings, and ruin lives and businesses.” Mr. Trump has portrayed people attending the wave of protests across the nation, who have demanded social justice and fair treatment of minorities by law enforcement, as “thugs” and criminals as he campaigns for re-election on a tough “law and order” platform.

The shooting on Saturday that left Danielson dead occurred near clashes between supporters of President Trump and counter-protesters after a “Trump 2020 Cruise Rally” that happened earlier in the day. Joey Gibson, the founder of the right-wing group Patriot Prayer, told the Associated Press that the person killed was a member of his group. 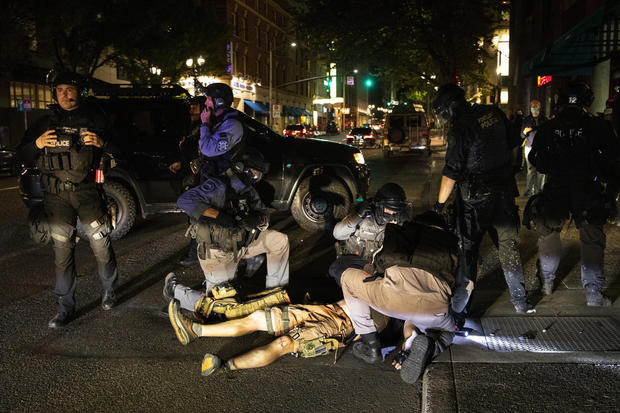 Mr. Trump shared a video on Twitter of a caravan of his supporters driving through Portland and lauded them as “GREAT PATRIOTS!”

In the wake of the shooting, Portland Mayor Ted Wheeler pleaded on Sunday for an end to violence. He appealed directly to people who posted messages on social media threatening to come to Portland to avenge the protester’s death, saying he was aware the shooting could become a potential “flashpoint.”

Reinoehl had had recent run-ins with the police prior to Saturday’s shooting. On July 5, officers cited him on allegations of possessing a loaded gun in a public place, resisting arrest and interfering with police. On July 26, Reinoehl was shot near his elbow after he got involved in a scuffle between an armed white man and a group of young people of color.

The man who was carrying the gun, Aaron Scott Collins, told The Oregonian/OregonLive that he and a friend had just left a bar when they saw the group harassing an older Black man. His friend began filming them with a phone, and the group confronted them, calling them Nazis, he said.

Reinoehl later that day spoke to an AP videographer. His arm was wrapped in a bloody bandage; he said he was on his way to meet protest medics so they could change it.

He said he didn’t know what had started the altercation between Collins and the group, but that several people had decided to intervene when they saw Collins fighting with minors.

“As soon as the adults jumped in, he pulled out a gun,” Reinoehl said. “I jumped in there and pulled the gun away from people’s heads, avoided being shot in the stomach and I got shot in the arm.”

Reinoehl also was wanted on a warrant out of Baker County in Eastern Oregon, where court records show he skipped a hearing related to a June case in which he has been charged with driving under the influence of controlled substances, reckless driving, reckless endangerment and unlawful possession of a firearm.

Police said he drove on an interstate at up to 111 mph, with his daughter in the car, while racing his 17-year-old son, who was in a different vehicle.

Mega Millions jackpot jumps to $970M ahead of Friday’s drawing

BBC'S Big Night In: Dawn French RETURNS as the Vicar of Dibley

Who is Thomas Skinner? Celebrity MasterChef and The Apprentice star – The Sun