There are numerous scenes in The Cave, an extraordinary documentary film about an overwhelmed hospital operating under military siege during the civil war in Syria, that are harrowing to watch. A row of bandaged toddlers sitting in shocked silence; bloodied victims of a missile strike rushed in on stretchers; the deadly aftermath of a chemical attack carried out by a government on its own people. The horror being unleashed is systematic.

But if it's difficult to view what happens at the frontline of atrocities against a civilian population, consider what it took to try and treat these desperate patients day in and day out for years. That's the burden carried by Dr Amani Ballour, the young female paediatrician whose resolute care for the hundreds of thousands of civilians trapped in the Al-Ghouta district on the edge of Damascus shapes the film's story. 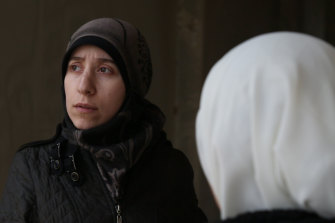 "I wanted to be a doctor to help people," says Ballour. "Of course I wanted to stay with them. This is my goal in the life, to help other people when they need. There were few doctors, and people need doctors. Too many doctors decided to flee, unfortunately. And I feel that people need me and I have to stay, of course. And after the siege, it was not our choice to leave."

Ballour was speaking via satellite at a Los Angeles press conference in January, where it was announced that having won numerous film festival awards and been nominated for Best Documentary Feature at the Academy Awards, The Cave would be broadcast around the world by National Geographic channel. While Feras Fayyad's film has raised awareness of the plight facing Syria's population, Ballour is one of five million Syrians displaced by the conflict, and is currently applying for asylum in Canada after two years living in Turkey.

Ballour spent four years at the hospital, which was known as the Cave because following bombardment of the area by the Assad regime and air attacks by their Russian allies it relocated operations beneath the facility, expanding the building's foundations to a series of tunnels to shelter staff and patients. The move protected against direct attack, but it couldn't alleviate the lack of medical supplies and the growing malnutrition amongst young patients.

"Let's keep smiling for the children," Ballour reminds a colleague as they descend to an underground clinic. "That's the least we can do." Worn to an edge, the doctor's resilience is remarkable. Calming children and reassuring parents, she has to deal with the pleas to flee Al-Ghouta sent by her father, the ever-present risk of the hospital being bombed, and – despite the life and death circumstances – men who object to a woman being elected to manage the hospital by her colleagues. 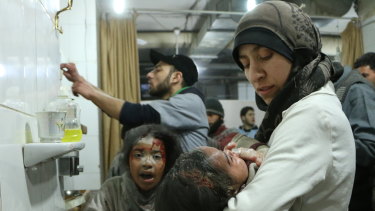 "It's very frustrating and I want extremely to change this situation because it's not true. I believe that there's no difference between man and woman," Ballour says. "We have to get our lives, we have to live, and we have to get our same opportunities like men. That's why I wanted strongly to stay and continue in my job and prove what women can do."

The commercial free premiere of The Cave on National Geographic in Australia occurs on Sunday 8 March, which is International Women's Day. The film was produced by Danish Documentary Productions, an all-female production house that worked closely with Feras Fayyad, a filmmaker who was himself tortured by the Assad regime and would go on to make in exile 2017's acclaimed Last Men in Aleppo, another documentary about the humanitarian crisis in Syria that was also nominated for an Academy Award.

From the opening shot, a still cityscape rocked by a pummelling succession of explosions, Fayyad's technique mixes the grim reality of the siege with moments of private contemplation and necessary levity.

Some of the situations the doctors and support staff face are nightmarish, but what sinks in is the difficulty of maintaining hope and the distortion of reality. People reflexively whisper, children have no sense of the outside world, and ruins extends for kilometres in every direction.

"My first goal of this movie when people see it, is that we can support Syrians. This is our testimony about what's really happening in Syria. This is my reality," Ballour says. "I want people to know the truth about what's happened."