A Tamil asylum seeker family detained on Christmas Island have won a legal battle in the Federal Court, finding their two-year-old daughter was not afforded procedural fairness.

A series of court orders have stopped the government from deporting parents Priya and Nadesalingam and their Australian-born daughters Kopika, 4, and Tharunicaa, 2, to Sri Lanka since they were moved to Christmas Island in August.

The family's future has rested on Tharunicaa's case, on whether she has a right to apply for a protection visa.

Federal Court Justice Mark Moshinsky found that Immigration Minister David Coleman had taken a procedural step to consider using ministerial powers to allow Tharunicaa to apply for a visa, which now needs to be finalised. 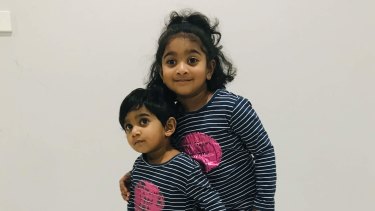 Tharunicaa, left, is pictured with her four-year-old sister Kopika.Credit:AAP

The decision does not require the government to grant her such a visa.

Justice Moshinsky did not substantiate her barrister's first ground, that Tharunicaa had made a valid visa application in September 2019.

Both parties have seven days to prepare agreed orders.

Justice Moshinsky delivered his judgement on the phone on Friday morning, to keep crowds from congregating during the coronavirus lockdown restrictions.

Family supporters would normally crowd outside court, calling for them to be returned to their regional Queensland home in Biloela.

Tharunicaa is considered an 'unauthorised maritime arrival', despite being born in Australia, meaning she would normally have no right to apply for a visa. 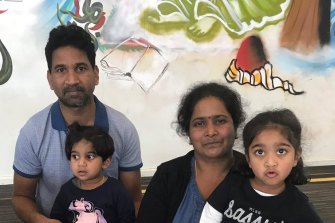 Priya and Nadesalingam and their Australian-born daughters Kopika and Tharunicaa. Credit:Twitter/@HometoBilo

The family was first detained in March 2018 when police raided their Biloela home after Priya's bridging visa expired.

The parents came to Australia separately by boat in 2012 and 2013 following Sri Lanka's civil war and established themselves in Biloela, near Gladstone.

The couple claims they face persecution in Sri Lanka due to links to the Liberation Tigers of Tamil Eelam.

The rest of the family has not been found to be owed Australia's protection and they have lost all possible appeals.

RHOSLC: Who Is Jen Shah's Former Employee Who She 'Verbally Assaulted'?

France's #MeToo moment? Woman's book alleges sex with 'ogre' author when she was a minor